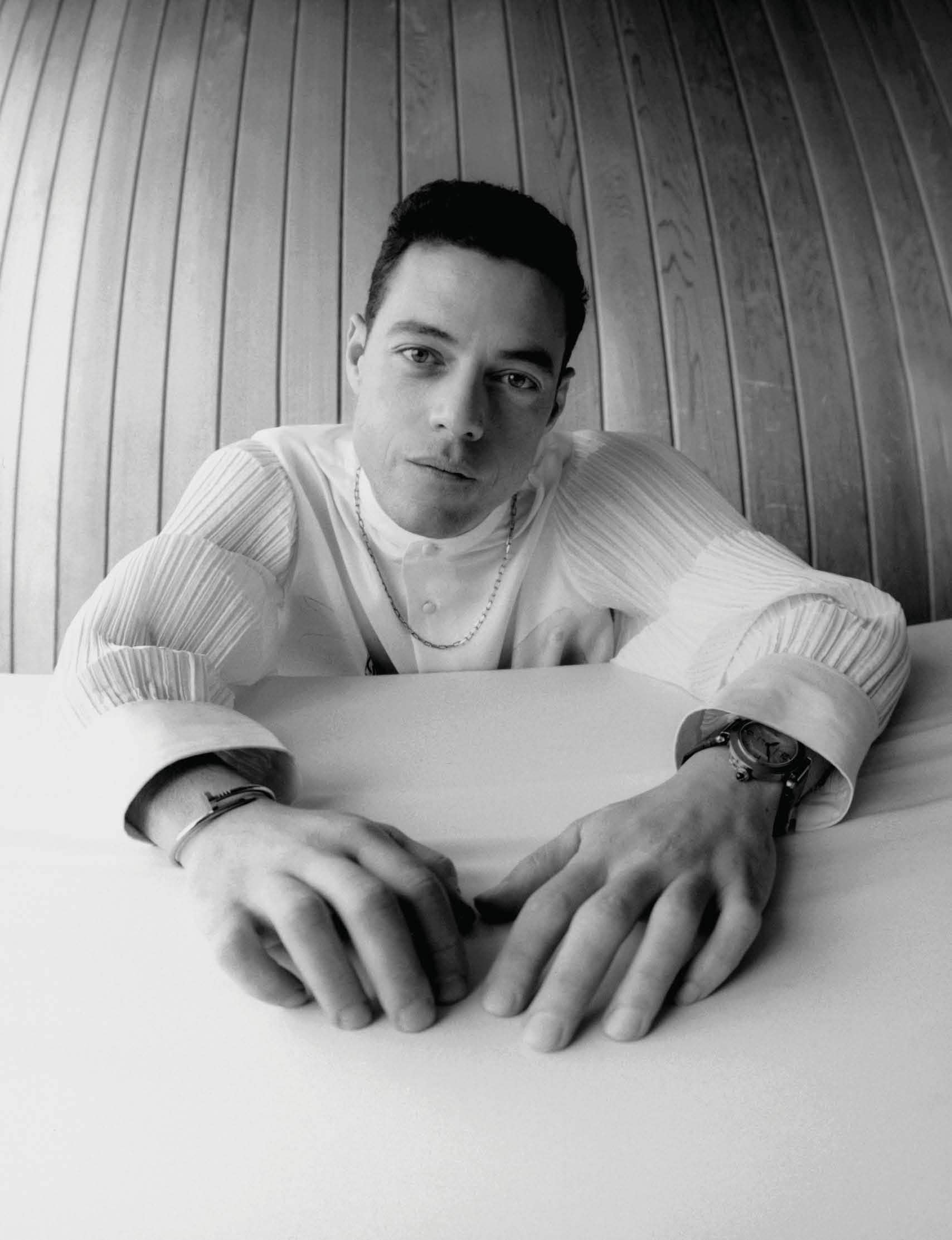 When he became the first person of Arab descent to win the Academy Award for Best Actor, Rami Malek had climbed the mountain. Now, with a starring role in an iconic franchise, he s̓standing on one summit and staring at a whole new peak

ADAM BAIDAWI
He was greeted by his agent, Doug Lucterhand, his publicist, Michelle Margolis, and a smattering of other people on his team. It didn’t take long for emotion to peak. A serving of his preferred agave-infused beverage arrived as if on cue. He savoured every drop.

From backstage, Malek could hear the rise and fall of noise as the show hit a denouement. It sounded like a faint TV broadcast, the vamping orchestra that gives way to commercial-break chatter, the way the clinking of glassware slows a little before an award is presented, and a distant announcement that the 91st Academy Awards were over. He was happy to sidestep the commotion entirely.

Malek’s clan for the Oscars was generous in size. Bohemian Rhapsody had marked many firsts for Malek. It was his first tentpole leading role. It was the first time he had a real, live, on-set assistant. It was his first Academy Award nomination. It was his first Academy Award win. It felt imperative to Malek that all those who’d helped him arrive to that stage, and that win, were there. There in spirit is cool – there on guestlist is cooler. So, Jan Sewell, the film’s makeup designer, was there. Polly Bennett, the British movement coach whose expertise helped Malek so eerily resemble the late Freddie Mercury, was there. Emma Hammond, his first-ever real, live assistant, was there. (Ever-grateful, Malek says the Oscars were, “Extremely accommodating.”)

An armada of vehicles at the ready, the Malek collective began a night of revelry. First they stopped by a Fox party, where Queen – Brian May, Roger Taylor et al – were ready to toast. A man named John on Malek’s security detail kept the knightly Oscar statuette fortified. Things got a little crowded, so they moved on, and on, and on, venue-hopping and dancing, bumping into Hollywood peers and luminaries, realising and rerealising what had just happened, until night gave way to morning.

“There was nothing compelling me to go home,” says Malek. “I danced my ass off that night.”

Eventually, they retired to a house, where Malek ended his night consuming “copious amounts of pasta in bed”.

The next morning, Malek glanced down at his phone. It had been collecting iMessages, WhatsApps and missed calls at an unprecedented rate.

“That seems to go on for a few days. There are a few people that anticipate that your phone is getting blown up, so they kind of give you some time and space out their calls. I spent about a week just responding to everyone that reached out,” says Malek. “That’s so fulfilling: to have all of your friends and loved ones, in a way, be able to celebrate that moment with you. To a lot of these people, I’m still that kid they grew up with and was giving acting a shot, and we would all see if it would work out.” 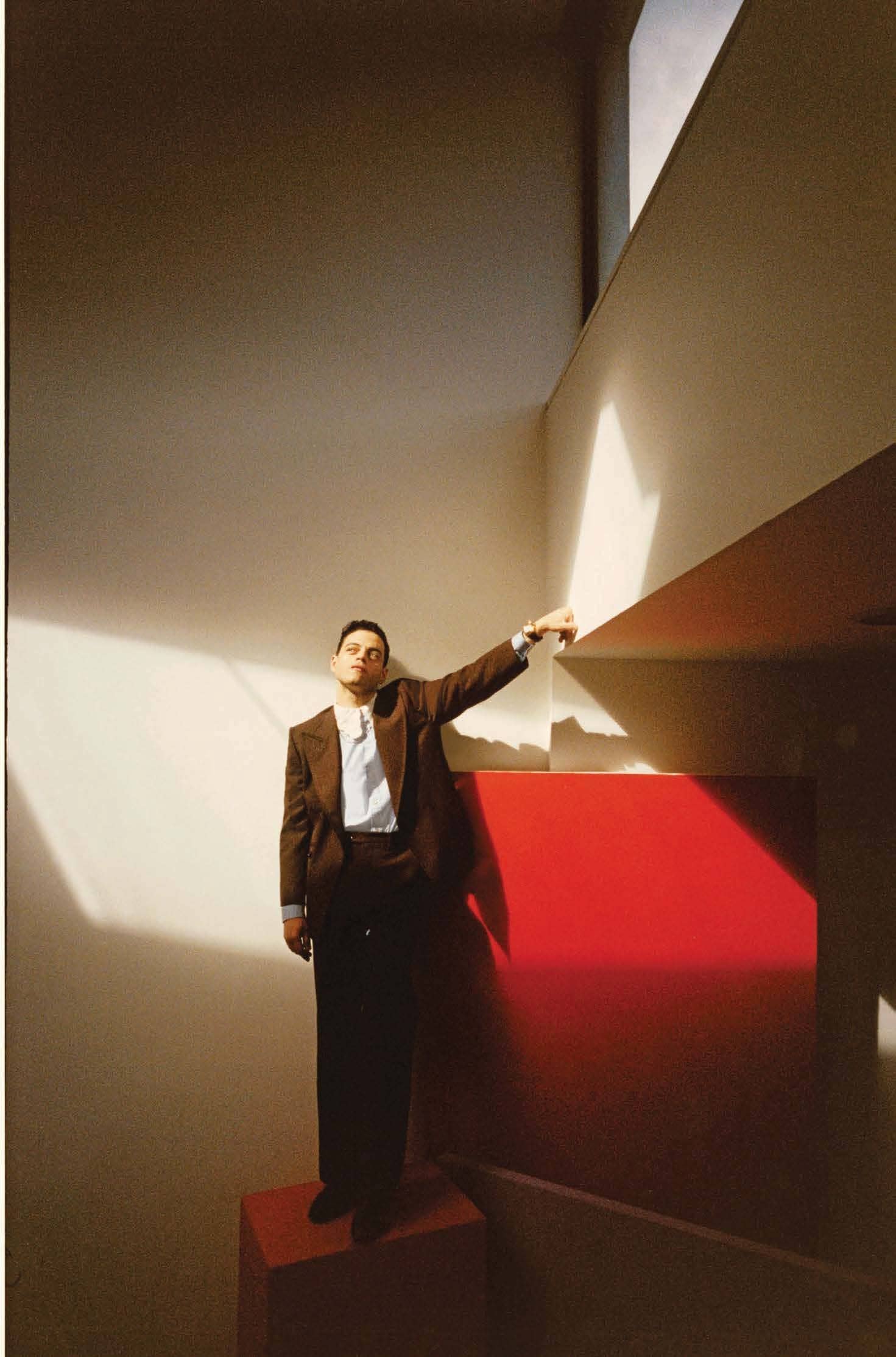 A little over 48 hours after his win, Malek was back on set, filming the fourth season of the Golden Globe award-winning series Mr. Robot, trying to make it work out all over again.

THIS SHOULDER-SHRUGGING notion of fate – behind which is a knowing wink – has been a regular theme for Malek. “I may not have been the obvious choice, but I guess it worked out,” he said in his Oscar acceptance speech.

Let’s cut it plainly: There aren’t a whole lot of people who look like Malek on mainstream cinema billings. There aren’t a whole lot of Egyptians. Before Malek, no person of Arab descent had ever won a Best Actor Oscar. In many ways, Malek’s critical and box office success – particularly playing a flamboyant Parsi-Indian man, whose lifestyle was so relentlessly critiqued – felt like something of a benevolent infiltration; a hacking of a system that has traditionally been (and often continues to be) closed-off, elitist, and only begrudgingly aware of issues of diversity.

After his first GQ cover two years ago, standing in the West Hollywood sun, Malek was coming to terms with the weight of leading man-dom. By then, he had had a couple of high-fashion campaigns under his belt, but was still grasping the fact that, yeah, Bubba Rami, that little Egyptian boy down the street, was blown up on billboards on Sunset. To him, the idea of being invited to fashion shows or fronting, say, a Dior campaign, still was wild and exhilarating. “Leading man… why not?” he said outside Cecconi’s. “The world is changing. I just hope that it’s not a fad. Not for me, but for all of us.”

Turns out, Rami: not a fad. And, given the opportunity with his first major leading role, he returned the favour by putting in a performance that garnered a little over $900 million at the global box office, a Golden Globe and an Oscar.

It’s been 18 months since that feat. Now begins his forever era: the time in which he can go from star of a moment to star of an age. It’s Leo after Titanic, it’s Pitt after Interview With The Vampire, Clooney after The Perfect Storm. It’s one thing to do it once, a whole other to be eternal. 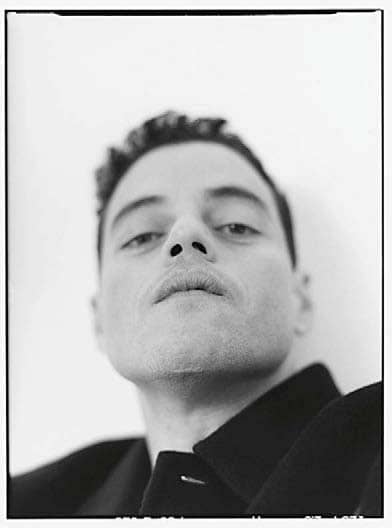 The start of the era, however, has been interrupted. We can talk in circles here, but there isn’t any use avoiding it: These are strange and awful and challenging times. Increasingly, despite a veil of “this is fine!”, people (me included) are struggling to remember what day it is. And, such is our pop-cultural ailment, you can’t help but look to someone like Malek to recalibrate yourself. Someone to wonder out aloud to: is this normal, what we’re feeling? And, not to project, but aren’t you a little f***** up by all this, too?

Pre-Covid, Malek’s last half-decade had been spent in a filmic and publicity sprint. His next film, No Time To Die, was weeks away from global release before the pandemic made light work of cinematic schedules. What has followed has been a prolonged, quiet pause. For Malek, that has meant many things, chief amongst them, an exhale.

“For some people, that’s exactly what they needed. I’ve appreciated that aspect of it. I’ve fluctuated between wanting to go do as much as possible in the day to just sitting back and catching up on things that I haven’t seen…enjoying all the content,” he says, the last word hitting a little wry.

Our interview happens as the UK’s lockdown has been relaxed just the smallest amount. Malek remains wary of the idea of an instant return to normal. “I’m kind of anticipating us going back into lockdown at some point. People have been going out and about without the mask-like it’s New Year’s Eve every day,” he says. “Just put the masks on. That’s it. It’s simple.”