GQ Gentlemen's Club - Mumbai Sessions
In 2019, GQ Gentlemen’s Club travelled to three cities – Bengaluru, Pune and Chandigarh – hosting three sumptuous dinners, inspired by Chef Alex Sanchez’s menu at Americano, Mumbai, enveloped in an overarching theme of sustainability. To round things off, we invited three of the country’s brightest culinary minds – Prahlad Sukhtankar of The Black Sheep Bistro and Black Market, Goa; Antonia Achache, co-founder of Kitchen Garden, Suzette and the recently opened Suzette Bakery; as well as Sanchez – for a candid chat on everything from hydroponic veggies and climate-resilient farming to why imported foods in India aren’t as great as you think they are ... Fuelled by Chivas 18, of course.
Shikha Sethi

What’s the most memorable meal you’ve had this year?

Prahlad Sukhtankar: Bar El Globo in Bilbao a couple of weeks ago. The pintxos [the Basque take on tapas, usually placed on top of the bar] were delicious. I tried the txangurro, which was brilliant. The region has the highest concentration of Michelin-starred restaurants in the world, and sometimes the staff get bored with that environment and then start their own little places that are more casual. So there’s quality even in the smallest of places. It was recommended to me by someone who previously worked in San Sebastián – another food haven – before joining us. Even at midnight, it was packed and buzzing.

Antonia Achache: Pierre [Suzette and Kitchen Garden co-founder] gifted Jérémie [co-founder] and me my birthday dinner at Alléno Paris in Pavillon Ledoyen, which was extraordinary. We had the 12-course tasting menu with the wine pairing, which included watermelon cured to look like serrano ham. The highlight was a Wagyu beef mille-feuille and the blue lobster, poached with some smoke, served with vine shoots. For dessert, they put a little essence of pine tree on Jérémie’s hand to lick off, like salt before a tequila shot, and then the dessert followed – so the flavors mix together. And of course, Alléno’s very famous for his extractions and concentrated sauces.

Alex Sanchez: Did they have the cart service, the cheese trolley…?

Achache: It’s more like a train – it’s the size of two tables at least!

Sanchez: He has another restaurant in Courchevel called Le 1947 – I’d love to go there too! I visited Thailand this year, and one of the best things I tasted was a pork salad. The thing I love about Thai food is that they’re not shy with their flavors, but it’s all just so well-balanced. 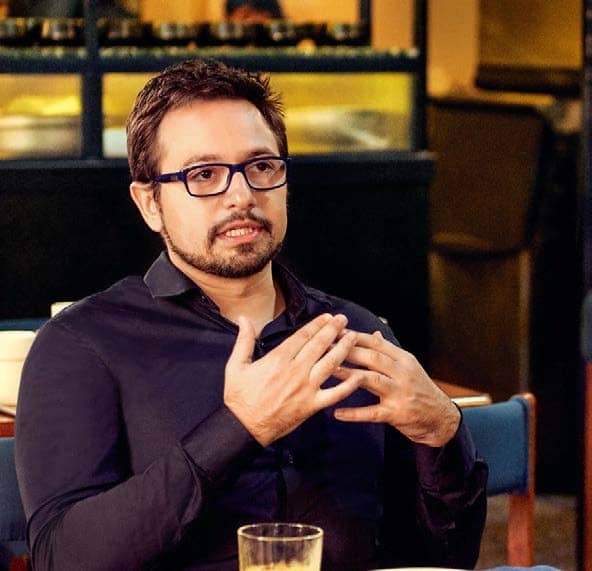 Do you travel to source ingredients for your restaurants?

Sukhtankar: I work with Triple O Farms, who do a lot of work in the tribal areas of Maharashtra where they source and revive the farming of indigenous crops, varieties that have been sort of forgotten over the last 1,000-2,000 years. We have varieties that are 4,000-6,000 years old, which are being revived because they help the soil, are more flavourful, nutritious, and environmentally sustainable as well. Earlier, people felt low-yielding crops were not the solution to food security, but they didn’t factor in the effect of seasonality. If you change what you eat every few months, you can have food security throughout. Growing different crops also helps the soil replenish itself.

My cousin also has a farm in Goa, so we source vegetables from there. Also from Nestor [from Ilha Verde Farmers’ Club]. On one of my trips with Triple O, we met a farmer growing forbidden black rice. His soil cover was about a foot and his yield was very low compared to his counterpart growing the same variety on the other side of the mountain. But the irony was that the low soil cover meant it was extracting flavour from the rocks below – there was minerality, nutrients, everything was compressed into this smaller yield. I wanted to tell him that if we were in France right now, his produce would be branded château something, he’d be charging as much as three times his neighbor and the value of the terroir would be recognized and rewarded. But, unfortunately, farmers here don’t know the quality of their produce.

Achache: The good news is that there are now more non-corporate organizations helping farmers to market their produce. Like Ruchi [Jain] at Taru Naturals. She helped us source rye, which we use for many of our breads, from some wild fields in Ladakh. The farmers were using it to make a local cheap alcohol, but thanks to Taru, they’re getting a much better price. She was also able to source emmer wheat, an ancient wheat, which grows in North India.

Sanchez: There’s an incredible variety of these old grains that farmers have stopped growing because they think people aren’t interested in them, but as a chef, I can tell you these are all the rage right now.