5 Tips: How To Fight Social Anxiety 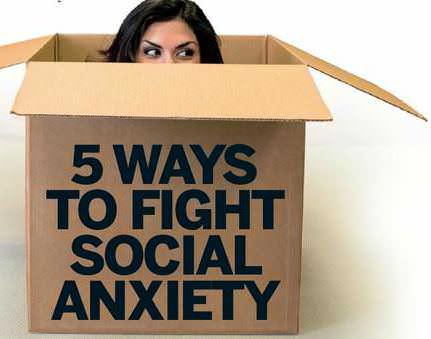 Lack social skills? Feel tongue-tied around people? You could be socially awkward, a condition which may lead to a serious social anxiety disorder. Suchita Parikh-Mundul speaks to experts and finds out ways to stem it ASAP

In a world where the suave and smooth rule the roost, those who are socially awkward, stick out like sore thumbs. The gift of the gab is a coveted social skill and those who don’t possess it are at a decided disadvantage. After all, if you can’t strike up or hold a conversation, you aren’t likely to make a lasting impression—or easy headway—in social situations, and more often than not, will be relegated to the boondocks of people’s minds and living rooms While being a social wallflower is not ideal, being aware of it and fighting it will help you get ahead.

“Social awkwardness occurs when an individual is overly concerned with being judged negatively,” explains Rima Shah, a clinical psychologist based in Bangalore. “It’s a milder form of social anxiety. When the concern magnifies to such an extent that it begins to interfere with daily life, it becomes a phobia, also known as social anxiety.”

“An individual who hasn’t had enough experience with social situations or hasn’t had enough social training growing up, can develop it,” explains Rima. “Maybe one or both parents are social novices, so there hasn’t been a good enough role model.”

“A lot of introverts are socially awkward,” says Tarana Pithawalla, a Mumbai-based clinical psychologist. “Extroverts can be awkward too, but have the ability to ease in and out of social situations—it comes naturally to them. For introverts, this ease itself is what poses a challenge.”

Confidence, or the lack there of

Although the intellectually gifted are not predisposed to social awkwardness, it’s not an uncommon occurrence. The fact that they may have had difficulty relating to their peers may well be the reason social awkwardness develops.

If you have had a sheltered childhood with few social opportunities, or if you have moved homes (and therefore schools) often, you could develop awkwardness. Immigrating to a foreign country or being bullied as a child also lend to its development.

“Social media platforms like Facebook further expose you to others’ perceptions further. It comes down to how many ‘likes’ your post gets, with self-esteem plummeting when you don’t get enough. You’re constantly comparing yourself to others and are worried about the standards set by society rather than the individual’s,” Tarana elaborates.