The Bleep Tastic Samuel L. Jackson Tells It Like It Is 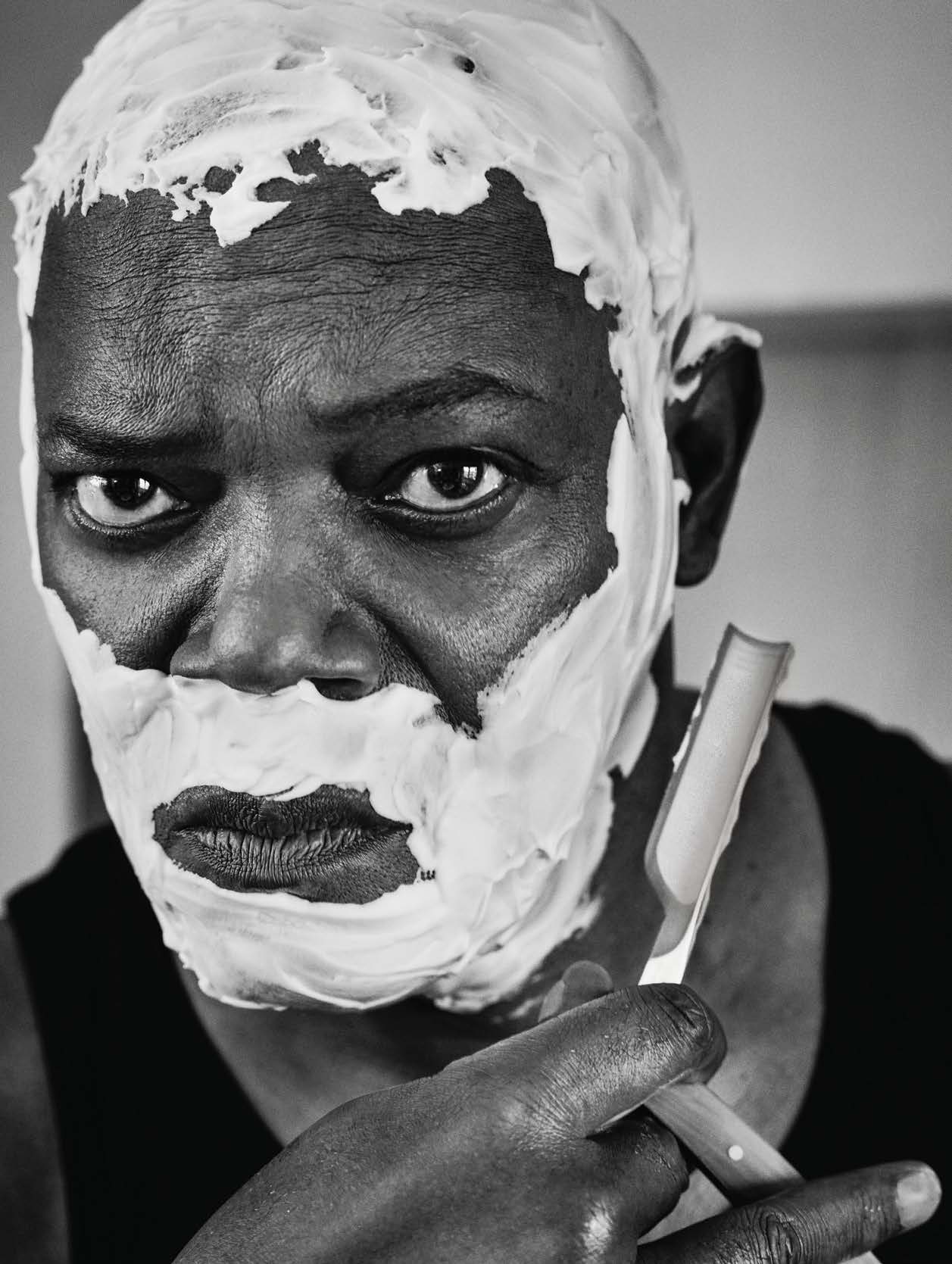 He’s a MUSE to Spike and Quentin. He’s a MARVEL STALWART, a JEDI, and a STYLE ICON. Given his magical way with a certain four-syllable word and the fact that he’s been so good for so long—120 movies over nearly forty years—we might think we know Samuel L. Jackson. But do we? Here, fresh from morning golf, he tees off on Hollywood, politics, and his childhood in the Jim Crow South. CARVELL WALLACE meets the man who believes success is about “maximizing your sh!t.”

Samuel L. Jackson is driving our golf cart pedal to floor through the unseasonably cold southern California morning fog, pushing the whining electric engine to its limits. It is 8:15 a.m., and he and his foursome have already played nine holes. I met up with them at the turn and hopped into Jackson’s cart as they continued on the course, interrupting their mild shit-talking with sporadic occurrences of golf on the back nine. It is one of those bizarrely random Los Angeles groupings of people you never imagine together. Richard Schiff puffing on a cigarette in a faded Yankees cap and pink-trimmed performance golf slacks. An unfailingly upbeat producer-writer who spends much of the time encouraging everyone’s shots and explaining the game of cricket. A young semipro in a razor-crisp polo who drives the ball off the tee like he’s opening up a portal to another dimension. Don Cheadle is supposed to be here but is absent for unknown reasons. (We eventually discover on the clubhouse television that it has to do with him appearing on Good Morning America at that precise moment.) I later hear that Josh Duhamel frequently rounds out the group. I have never been on a golf course in my life.

Jackson drives, peppering me with questions (“Have white folks started confusing you with Brian Tyree Henry yet?”) and gleefully navigating around obstacles in our path by running two wheels up on the wet grass despite bountiful signage warning us not to do just that. Each time he does this, the cart threatens to pull a little movie-stunt two-wheel tip and throw me onto the asphalt pathway. “Engage your core,” he tells me with an 85 percent straight face. It is good advice from a seventy-year-old man from Chatta nooga, Tennessee. I am vaguely scared and trying to play it cool. He is driving decisively, wholly unconcerned.

At his age, the Hollywood veteran wears “wholly unconcerned” as comfortably as the faded black Adidas bucket hat he golfs in. This becomes clear to me when I later interview him in the country-club restaurant and he sprinkles n-words and motherfuckers about the dining area like handfuls of glitter as Grandpa- and Memaw-type club members look awkwardly into their eggs Benedict. He behaves not only like a man who belongs here but also like one who basically owns the place. His casual inattention to the perceived authority of white power structures is so deeply woven into his way of being that in his presence it seems bizarre that anyone, anywhere, would think to behave differently. A lot of people like to say they don’t give a fuck. Samuel L. Jackson simply doesn’t. 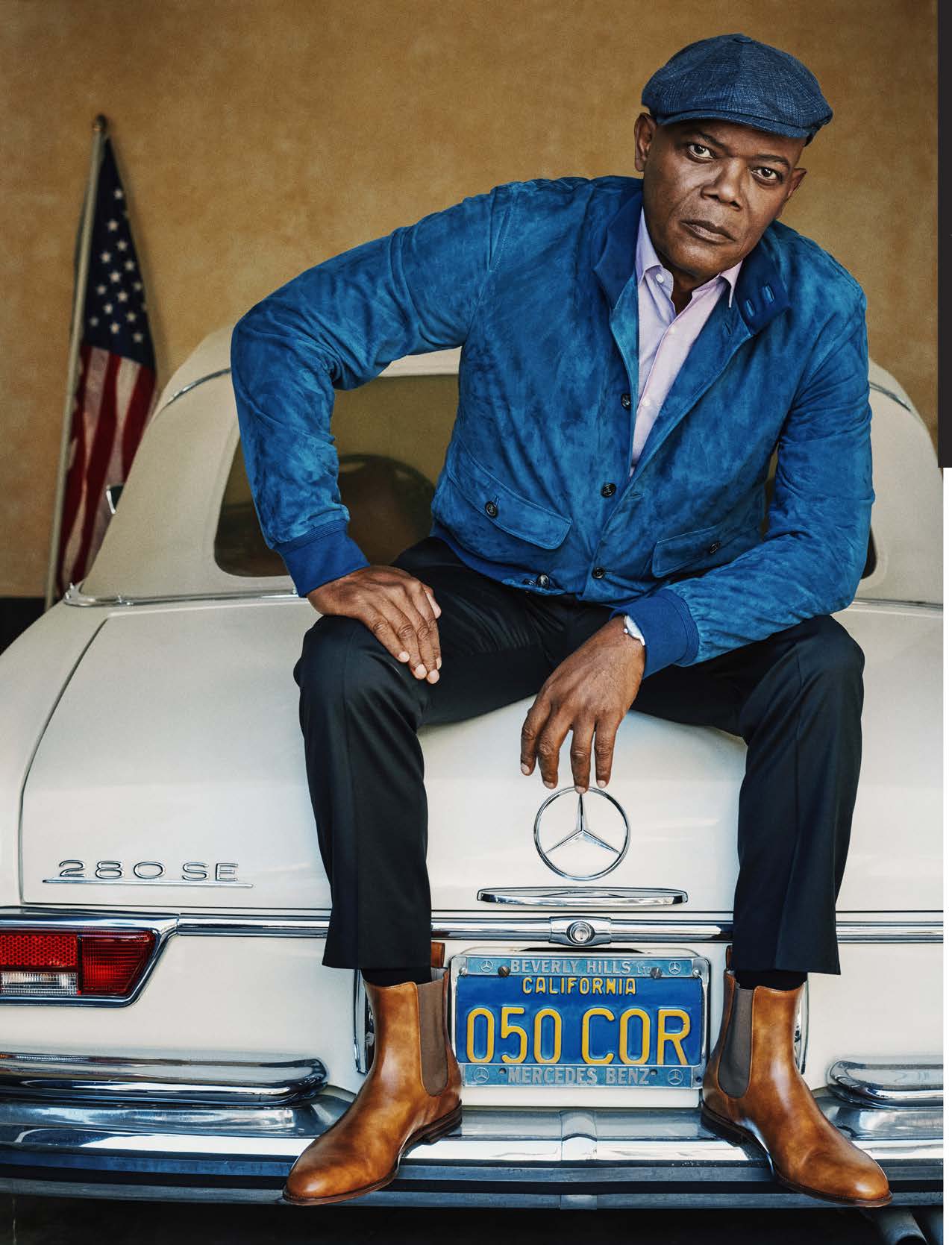 What he does care a great deal about is acting and movies (and golf—he is coy about his handicap but acknowledges it lies in low single digits), and he approaches his craft with both a childlike love for the medium and a specialist’s obsession with technique. This combination has led him to enjoy one of the most prolific film careers of any actor alive, despite his relatively late-in-life big break. Perhaps only Nicolas Cage comes close to achieving Jackson’s ability to pop up across a pantheon of wildly disparate titles, ranging from the sublime (Pulp Fiction, Unbreakable, Eve’s Bayou) to the absurd (Snakes on a Plane, Jumper, The Man). I had heard that he averaged four releases a year, which I thought was insane until he corrected me and told me that it was closer to five. In two separate calendar years, 1990 and 2008, Samuel L. Jackson’s name was on the call sheet for seven different films. Moreover, he has found his way into megafranchises like Star Wars and The Incredibles, and as former SHIELD director Nick Fury, Jackson has shot eleven different Marvel movies, including four Avengers films.

But if any year is the year of Sam Jackson, 2019 looks to be it. In addition to his upcoming Marvel work, he will star in the sequel to 2000’s cult-classic remake of Shaft and handle narration for the much-anticipated docuseries Enslaved. This year also marks the twentyfifth anniversary of Pulp Fiction, which will be celebrated with hundreds of theatrical screenings and a bevy of appearances and interviews by the man who immortalized Jules Winnfield. The Jackson-led M. Night Shyamalan sequel Glass opened the year atop the box office for multiple weeks, and between that and his Marvel commitments, the actor could spend the first year of his seventies with more weeks at number one than any other working actor in 2019—a remarkable feat for a man who is already the highest-grossing film actor of all time, with his movies accounting for an estimated $13 billion combined.

You can think of film acting—and most people do—as the art of creating convincing emotions on command. But fewer recognize it as the art of both nailing takes and saying other people’s words in a way that is so engaging, so clear, so mesmeric that viewers can’t help but stop whatever they’re doing to watch. He is an all-time great at the second and third things and is woefully underrated at the first. Sam Jackson owns words. It doesn’t matter who wrote them. Once he says them, they belong to him, and anyone else who dares speak them is immediately reduced to a cheap imitator. More than flash on film, he has managed to build a legitimate leading-man career out of the journeyman’s trade by showing up to sets on time for nearly forty years and saying his lines correctly and with inimitable style.

This gift is particularly visible in his work with Quentin Tarantino, Jackson’s most frequent collaborator. He has starred in six of Tarantino’s eight features. The director screen writer’s ear for dialogue marries the elegant with the profane and is a perfect match for Jackson’s talent for irreverent rhapsody. Jackson received a Best Supporting Actor Oscar nomination for his performance as Jules in Pulp Fiction, but a legitimate case can be made (and Jackson has made it) that he was a leading actor in that film. Ask any dorm-room Pulp Fiction fan to quote a line from the movie and the odds are high that the one they choose will have been spoken by Jules, a startling fact when you consider that he only appeared at the beginning and the end of the film. This effect is even more pronounced in Tarantino’s follow-up effort, Jackie Brown, a long-form character study masquerading as an underworld heist flick. Like Jules, Jackson’s character—the Kangol-clad, ponytail-sporting arms merchant Ordell Robbie—is by turns winsome and pestilent. But here Tarantino and Jackson court an entirely more malignant vibe. Whereas Jules is a charming man in a world of stylish people who do horrific things with integrity and humor, Ordell is squarely situated in a province of aging criminals confronting their rapidly crumbling chances to live out their youthful dreams. Jackson cuts his winning smiles, easygoing manners, and lyrical maledictions with a heavy dose of nihilist grief and quiet desperation. His trademark charm offers a thin veil for his unutterable evil. You would like to have a couple drinks with Jules Winnfield. You would quickly leave the bar if Ordell Robbie so much as made eye contact with you. 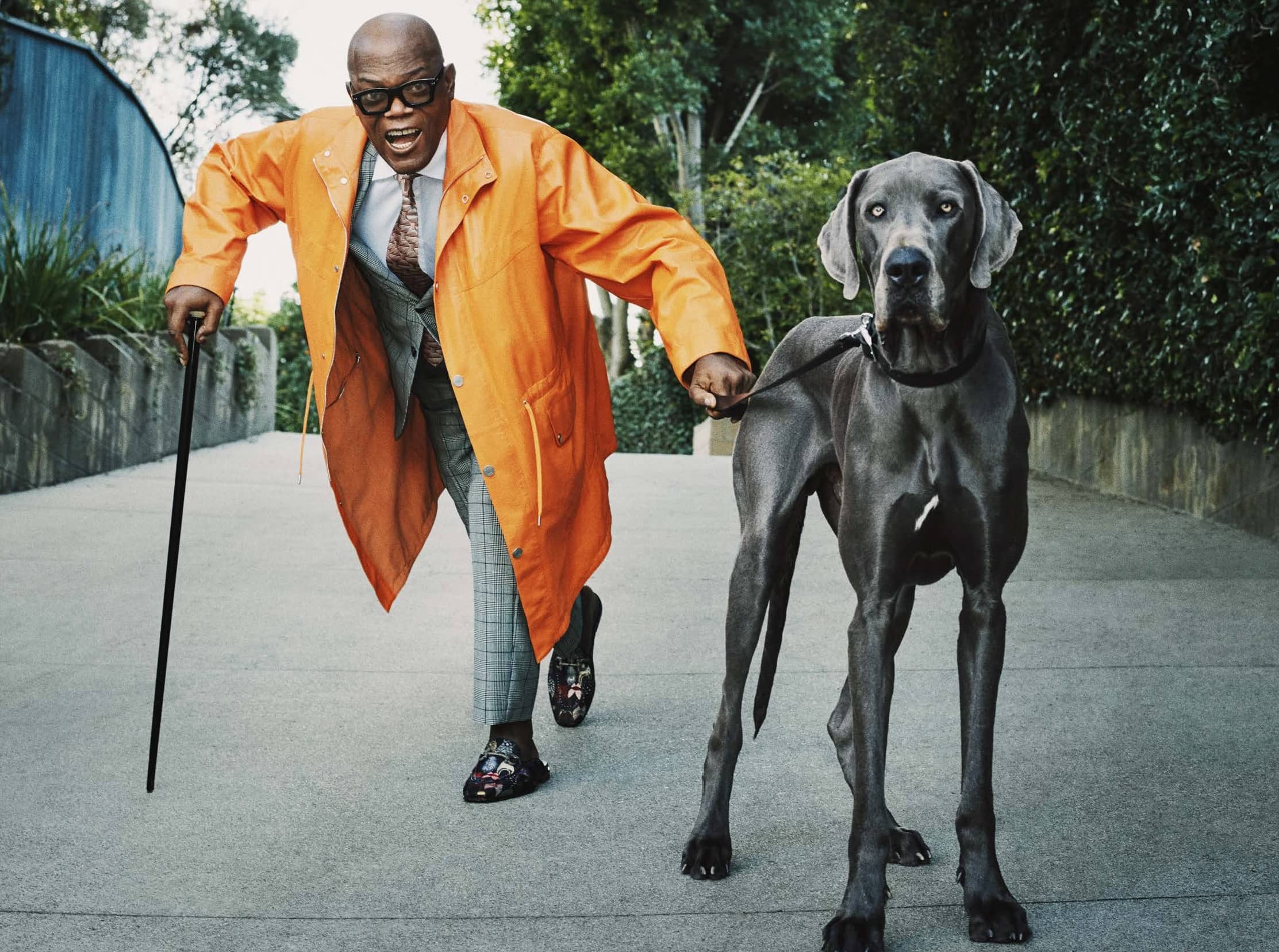 He was an only child raised by his maternal grandmother and his mother, a factory worker and later a supplies buyer for a mental institution. His father was largely absent from his life. His aunt, a performing-arts teacher, cast him in plays and placed him in dance classes, which he ultimately came to love for the applause most of all. “You hear the claps,” he tells me, “and that shit is like ego food.” He also played multiple woodwind and brass instruments and harbored dreams of becoming a jazzman until he discovered in the eleventh grade that he lacked the ability to improvise. He entered Morehouse College, in Atlanta, just as the famously persnickety HBCU was opening its gates to a wider variety of students. The decidedly working-class Jackson found himself alongside stern, Afroed, black-fisted men newly returned from the war in Vietnam and carrying a radical militancy that made sense to the young Tennessean who had been warned as a child not to even look white people in the eye. Jackson quickly fell into student activism, helping to take over an administration building in an attempt to secure a black-studies course and greater black representation on the board of trustees. Among the hostages in the multiday siege was Martin Luther King Sr., whom they had to let go because he was having heart trouble. For his role, Jackson was expelled in his junior year, but the event would only serve to energize him. He slept in the office of the Student Nonviolent Coordinating Committee and joined forces with H. Rap Brown and others in a scheme to steal white people’s credit cards and use them to stockpile weapons for what he thought was an inevitable race war. Meanwhile, his friends and associates were dying in “mysterious” automobile explosions.