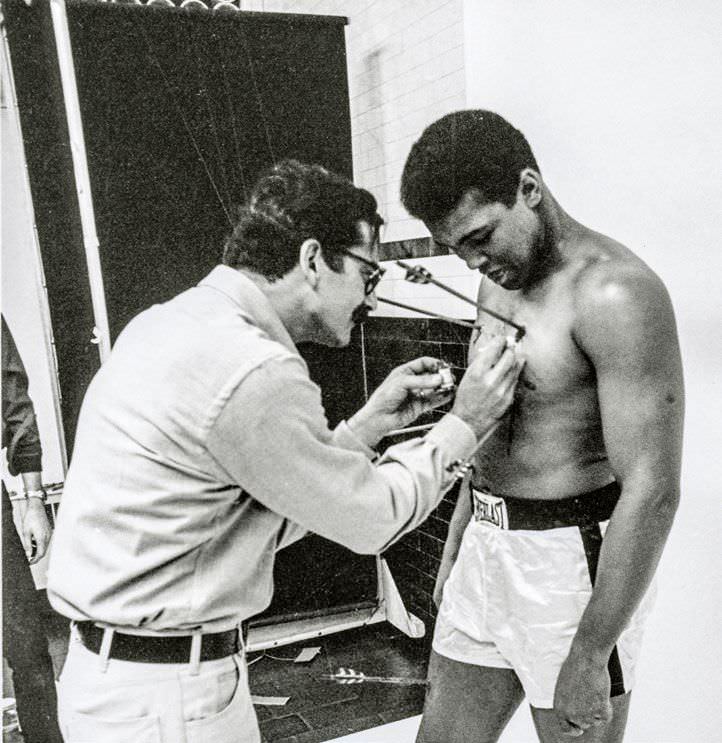 Both an athlete and a symbol of noble defiance, Muhammad Ali was a hero to men everywhere. Long after the Thrilla in Manila, and certainly long after his death, he will be remembered as the greatest.

ARANETA COLISEUM WAS BUZZING for four days after Muhammad Ali, the man who may very well have put Manila on the world map, passed away. Cubao usually hums with the feet of thousands shuffling, people passing by one of Quezon City’s busiest areas. But this Wednesday was a little different.

There’s a basketball game to be played between Gilas Pilipinas and fancied rival Iran, with fans lining up for tickets outside the Big Dome. The surrounding coffee shops and restaurants were also packed with no room for serenity, save for one spot in front of the Green gate.

Inside a small cordoned-off square is a poster of Ali’s iconic fight against his nemesis Joe Frazier, the classic end to their trilogy called Thrilla in Manila. Flowers were laid on the ground below the poster, while a large banner loomed above in celebration of the 40th anniversary of the epic Ali-Frazier slugfest last year.

A solitary man stood in front of it for a good five seconds before moving on like the rest of the crowd. And at the nearby Ali Mall, the historic edifice-slash-shopping establishment inspired by the boxing legend, a tribute filled with Thrilla memorabilia was put up in honor of the global icon. Fans, and even those who know nothing of the man, gathered to pay their respects, with the crowd swelling over the weekend, when people fl ocked to the mall better known for cheap buys and cheaper thrills before its renovation.

Fathers brought their children, some old enough to comprehend, others too young to remember anything past the fun in the rides just behind the gallery.

It’s curious to note that a man mentions his father in a simplistic attempt to explain the relevance of one of the world’s most iconic figures to his son. Acting like a bridge between generations and summing up the life-changing contributions of Ali in and out of the boxing ring in one word: Idol.

The kids are supposed to get that, to pay their respects to a revered figure, or at the very least politely nod, before they end the closest experience to an Ali pilgrimage for Filipinos and head to wherever they had planned to go in the first place. But bridging that generational gap takes more than a word, especially if you’re talking about a man who became such an inspiring, iconic boxer, more with his words and deeds than his fists.