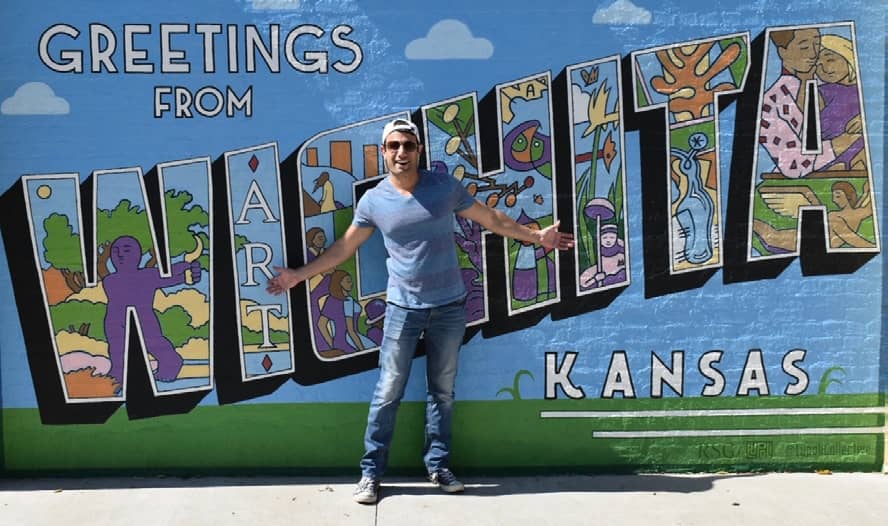 Joey Amato is the publisher of Pride Journeys, the premier source for LGBT travel. Joey publishes destination reviews in addition to lifestyle content that is both insightful and engaging to LGBT readers. Joey has spent the majority of his career dedicated to the LGBT community, having contributed to numerous publications around North America. In addition, he owns Agency33 Public Relations, a full-service firm specializing in LGBT outreach.

When I found out I had the opportunity to visit Wichita, I was really excited. I had never been to Kansas before (aside from Kansas City) and was eager to see what “Cowtown” had to offer. First, a little history lesson. The city actually began as a trading post on the Chisholm Trail in the 1860s and became a key destination for cattle drives traveling north from Texas to access railroads, earning it the nickname “Cowtown.” In the 1920s and 1930s, businessmen and aeronautical engineers established a number of successful aircraft manufacturing companies which helped transform the region into a hub for aircraft production. Wichita got a new nickname, “The Air Capital of the World.” Manufacturers including Airbus, Beechcraft, Cessna, Learjet, and Spirit AeroSystems currently operate large facilities there.

In addition to planes, Wichita is also known for its weather. I know this may sound strange, but I was really hoping to witness some intense storms. Kansas lies in tornado alley, so I was in full storm-chaser mode. However, all I experienced was a small thunderstorm, but it was cool non the less.

I digress. Wichita is home to Tanganyika Wildlife Park. Yes, it took me the entire trip to remember how to pronounce the park’s name, but I got it eventually. Tanganyika offers more hands-on opportunities and up-close animal experiences than traditional zoos. My first stop was the penguin encounter, an indoor/ outdoor exhibit filled with cuteness. I learned firsthand that penguins like to play with shoelaces and anything colorful. And speaking of colors, they also enjoy painting. I left with a beautiful work of art painted by one of my new friends.