Of corn blobs and goggle-eyed plovers 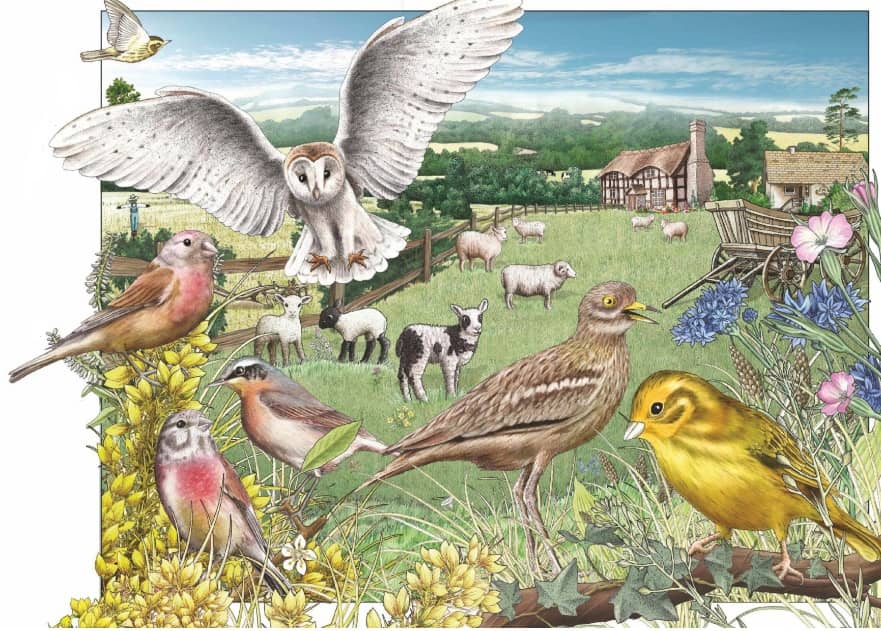 From the ‘ethereal minstrel’ skylark to the yellowhammer with its ‘little-bit of-bread-and-no-cheese’ call, these birds are inextricably linked to our farming heritage, says Jack Watkins

AMONG the diverse range of British bird habitats, the largest is what you can broadly call farmland. Its mix of arable fields, sown and natural grasslands, moors, hedges, ditches, orchards and small woods accounts for about 71% of the land area. It is, therefore, inevitable that the species that shelter, feed and nest within it are among the most closely monitored, in order to maintain an overall sense of the health of our avian populations.

Some species are more obviously farmland birds than others. The robin nests in farm scrub, but is equally associated with gardens, as is the wren, with its bright, perky song that can be heard almost anywhere. Goldfinches, since they discovered a taste for the sunflower seeds kindly souls put out in feeders, have lost something of their old ‘birds of the open fields’ aura. The following 10 species, however, are inextricably linked to Britain’s farmland heritage across many centuries.

IS there a happier bird in Britain than the skylark? Barclay Wills, chronicler of the last years of the South Downs shepherds, wrote of ‘tireless larks… singing overhead’ and William Wordsworth called it an ‘ethereal minstrel’ pouring ‘upon the world a flood of harmony’. Its rapid song is so continuous it can last five minutes, the metallic piping often coming from so high up that it appears to be the work of a dot in the sky.

Nothing is more synonymous with a hot summer day on the hills, but skylarks are, in fact, ground-nesting and feeding birds. They like short, grassy and herbaceous cover and thus benefited more than almost any other species from the clearance of our primeval forests and the arrival of arable farming. However, post-war intensification and fewer fallow fields precipitated a decline that even their status as a flagship species for farmland bird conservation has so far failed to reverse.

SOMETIMES colloquially known as the English partridge, its value as a game bird of superb eating quality (‘And a partridge (not in a pear tree)’, page 112) is celebrated in an old proverb: ‘If the partridge had the woodcock’s thigh/Twould be the best bird that ever did fly.’ Thriving on old-fashioned mixed farms, with arable fields and meadows bounded by thick hedgerows, grey partridges may spend their entire lives within the same couple of fields. The birds are regarded with affection by many farmers, although they have struggled in modern farm systems. The idea of the unsprayed conservation headland on the outer margins of cereal crop fields to boost wildlife was initially devised specifically for grey partridge by private landowners, in partnership with what is now known as the Game & Wildlife Conservation Trust.