Love On The Nile 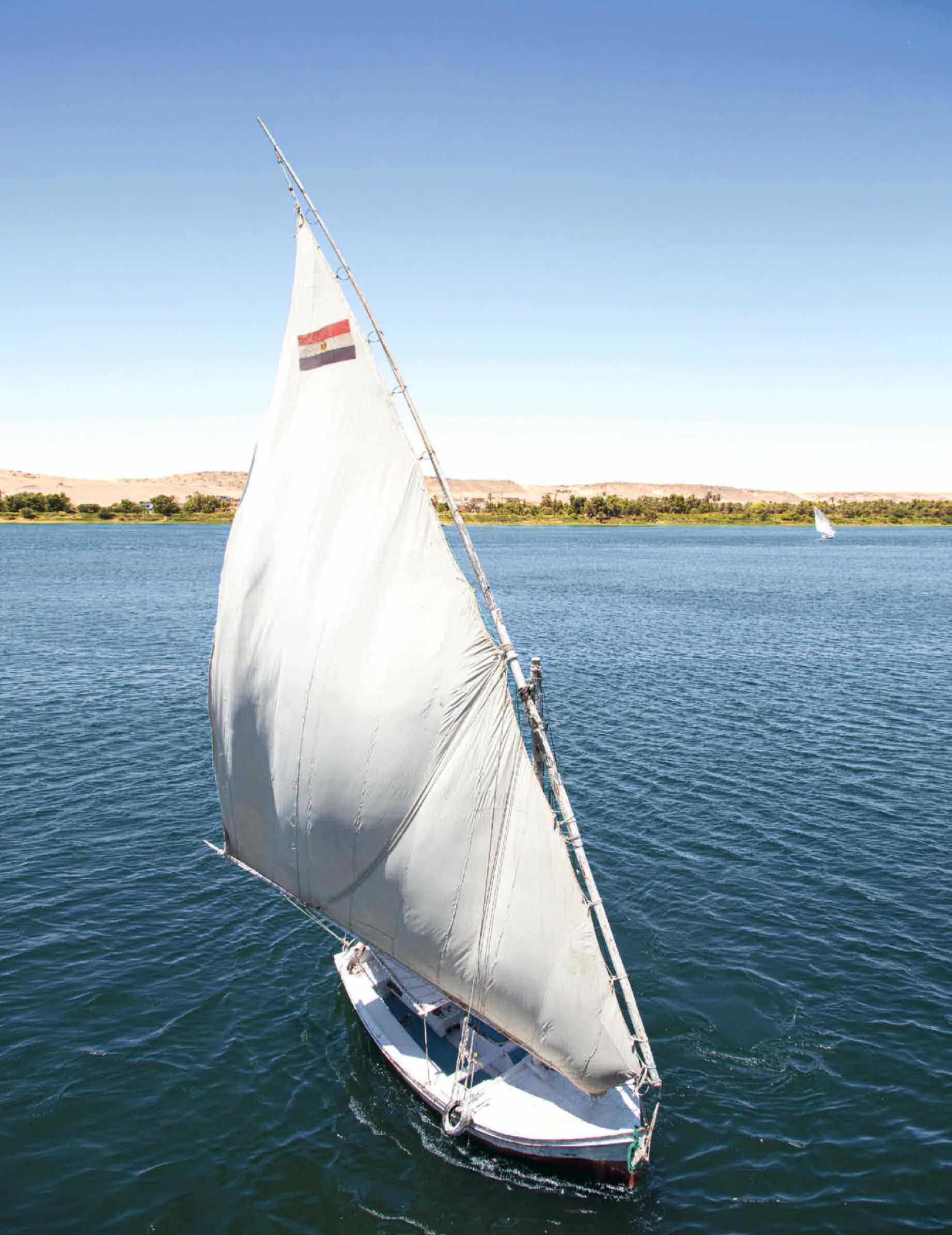 For years, I yearned to travel to Egypt so that I could retrace the itinerary of Agatha Christie’s Death on the Nile (minus, one hopes, the death), sailing from Aswan to Luxor. But more importantly, I wanted to see my childhood best friend, Nora. We grew up in Damascus, but, displaced by the war, she lives in Cairo now, and I hadn’t seen her in years. Come and visit, Nora had said to me for years. And last spring, armed with the 19thcentury travel memoirs of the French novelist Gustave Flaubert—because Death on the Nile is a truly unreadable book—and eyes blinded by the past, I finally do.

I have two nights in Cairo and even though my time is brief, it feels as though I have been here before. On my first evening, at Hayda, a Lebanese restaurant along the banks of the Nile, I see Nora for the first time in eight years. We’ve been friends since the first grade, and although, since we last met, she’s gotten married and had two children, I see no trace of time on her. I see her just as she was, just as I left her. We sit outside, the bright lights of the city obscuring the dark river before us, and eat Arabic mezze, gossiping and reminiscing. We don’t talk about Damascus.

Later, as we sit in the car, Nora and her husband ask me what I want to see in Cairo. Tahrir Square, I say. They drive me there, at 2am, and we circle the roundabout where, for so many, the Arab Spring came to life. Tomorrow, on Friday, the square that birthed the Egyptian Revolution will be filled with protestors again. But tonight, it is lit up and empty.

As we drive through Tahrir Square, I am nagged by the question: why do I feel like I’m returning to a place when I’ve never been here before? I think of Flaubert’s letters, and feel I am tracing some of his footsteps. I decide to forgo the guidebooks and rely on the homesick dispatches of a dead Frenchman’s impressions of Egypt:

“How can I write to you about it?” he wrote home upon arriving in this city. “I have scarcely recovered from my initial astonishment. It is as if you had been dropped fast asleep right into the middle of one of Beethoven’s symphonies, when the brass is deafening, the basses are rumbling away and the flutes are sighing.” 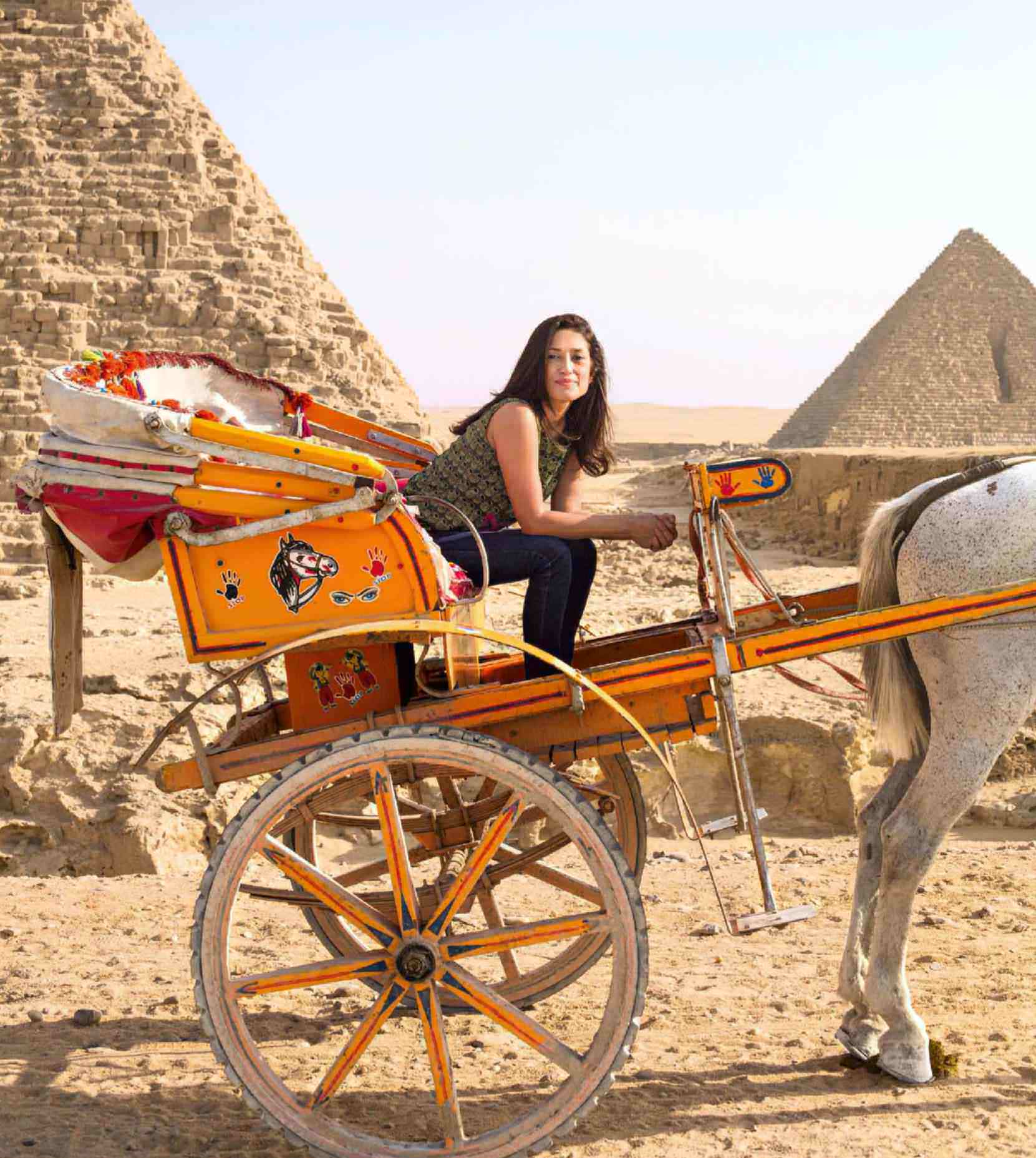 Driving along the highway to Giza as dusk sets, between the tall skeletons of skyscrapers and apartment complexes being built, the pyramids peek through like ghosts. If you take a photo of the landscape, it will look as though you put them there, drawing them in like shadows. In the gloaming, the pyramids seem to sway with the dying light.

It is hot and the sun burns even as the day ends. Sugar cane carts are parked on the road, vendors crushing the long, sand-coloured stalks into juice. Outside the famous monuments, used ticket stubs cover the floor like confetti. I sit in a horse buggy and am carried up a small hill, the horse galloping past the Sphinx, her hooves sounding on the tar like drumbeats. In profile, the Sphinx is so beautiful he resembles a Nubian princess, though he is a man (“For wisdom,” Ali, the buggy driver, tells me), his head resting on a lion’s body (“For strength”, another masculine trait,” Ali is quick to remind me).

In all the photographs I’ve seen, the tombs look smooth, but as the horse climbs the hill, I see the waning moon, an upturned, pregnant crescent, hanging between the great pyramids of Khufu and Khafre, and there, hundreds upon hundreds of stones placed one on top of the other, uneven, but glorious.

“In these old tombs sleep the still crowned kings of olden times,” Flaubert wrote, in awe of the monuments of Giza. “O traveler! O thinker, And your thirst will be appeased and all your life will have passed like a dream for you will feel your soul go out towards the light and soar in the infinite.” 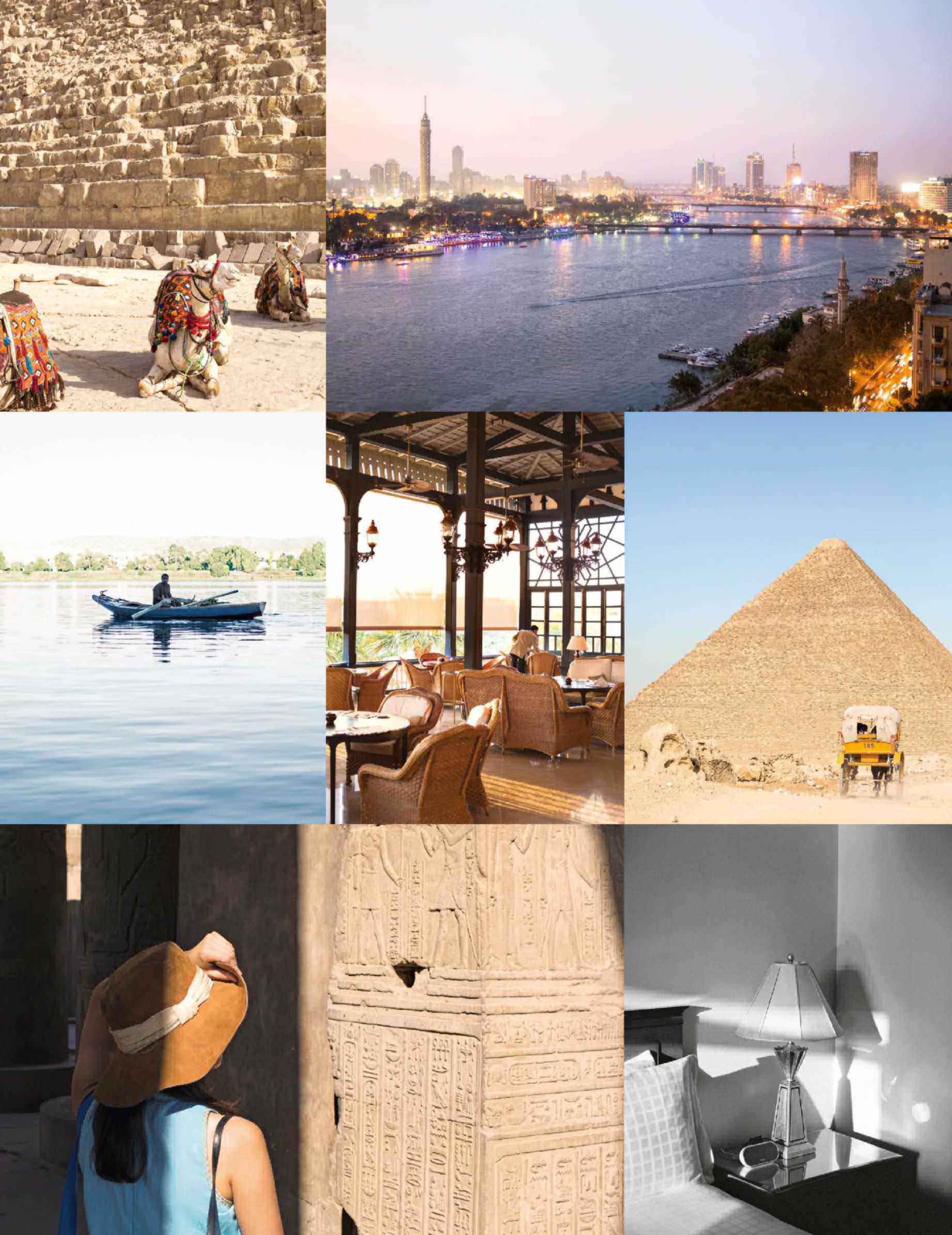 â€‹Maybe it is this, the elemental beauty of Egypt’s civilisation, that makes me feel as though I’m returning. Maybe it is the powerful weight of Egypt’s artistic, architectural and political history that stirs something primal in visitors, down from Flaubert to us ordinary beings. But even here, in the shadows of such antiquity, my heart is moved by the simple reminders of my own past. The sound of Arabic spoken everywhere, a language so beautiful it lifts like music, reminds me of my childhood in Damascus; just hearing it makes me feel safe. The tea, served in clear glass thimbles, sweetened with sugar and sprigs of mint, like I remember it from Syria. The loud, percussive Arabic pop music that emanates from every car that passes Ali’s metal buggy as we crawl down the sloping path ringed around the pyramids. Flaubert connected to the transcendent. I am less evolved. I’m looking for home.

Aswan, where the Sahara begins and the ancient Nubian kings once ruled, is the most beautiful part of the Nile. The water, a deep sapphire, is freshest here. On one bank, you have the desert, endless beige sand, and on the other, long golden reeds and fertile green land overflowing with date palms.

There’s not a schoolchild on earth who hasn’t studied this profound life source. Somehow you feel it, this energy, the overwhelming legacy of its history and power. “Fatma, you can’t stop believing in the Nile,” says my guide, Salwa, so charming that I don’t mind that she amputates my name. “When you’re desperate, you leave the house and walk besides it. When you’re happy, you take your lover to the banks. No Egyptian can forget the Nile.”