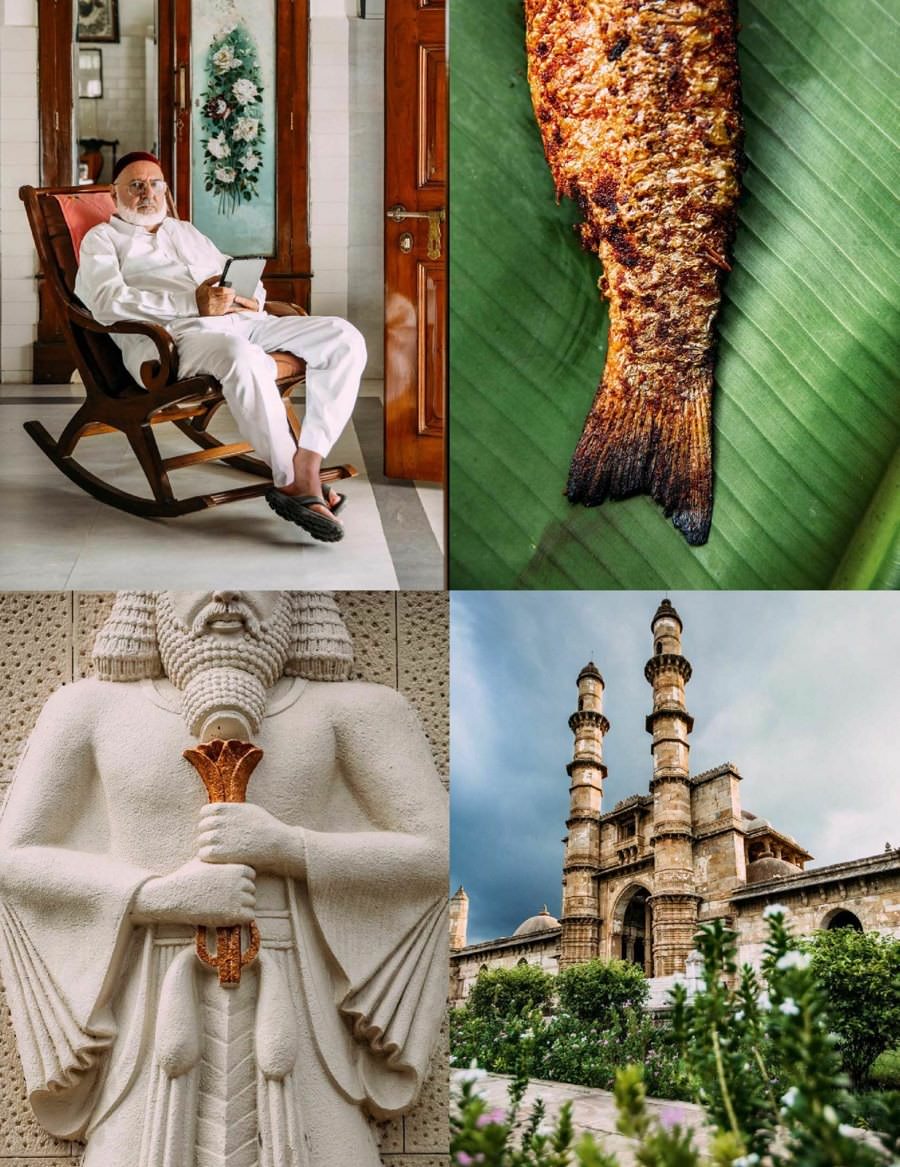 Devdutt Pattanaik explores Gujarat through the ages and its cultures and histories, a microcosm of the multi layered finds, in its archaeology, its myths and legends, country he loves.

Where does history begin? With Krishna? Or the dinosaurs? The mythologist in me seeks Krishna, but the scientist sought out India’s very own Jurassic Park. This is where history begins. Not with gods or humans, certainly not with kings and their palaces, but in nature. So I took that long drive to the village of Raiyoli, near Balasinor, and spent a few hours identifying the outlines of shells of eggs laid maybe 100 million years ago by dinosaurs. Circle after circle after circle after circle. I even held a dinosaur egg and a dinosaur bone in my hand. All thanks to the well-trained local guide. If not for him, no one would guess that this flat, barren, rocky land was, in fact, once the graveyard of dinosaurs and the world’s largest hatchery.

On a hill overlooking this spot, I found a tiny shrine dedicated to Shiva and a nath jogi—mendicants who trace their spiritual ancestry to the medieval yogis, Matsyendranath and Gorakhnath, and seek immortality. Invariably they build shrines in places linked to death, unlike today’s Hindus, who shun such places. Which is why Prabhas Patan in south Gujarat, where Krishna died, is not as popular with pilgrims as it should be. They prefer the Somnath temple, where the moon, Soma, cured of wasting disease by Shiva, built a temple in his honour. Perhaps this is because in their minds, the Somnath temple is proof that even a place associated with a near-death experience can become a wellspring of immortality. Or perhaps it’s because of the temple’s reputation of rising like a phoenix despite repeated plundering.

The sight of a Shiva shrine at Raiyoli made me think of Sharabha, a fierce manifestation of Shiva as a lion with eight legs and the tail of a serpent, that could easily be considered a Puranic dinosaur. I asked the local caretaker if he knew the story, trying to see if there was a link between the lore, the dinosaur fossils and the shrine built by the nath jogis. He just smiled, offered me cold water from his tiny fridge, and a receipt for my donation. Intellectual talk did not interest him. He was content immersing himself in the seva of his long-dead guruji.

I, on the other hand, was embarking on an anthropological quest to explore India through the history of one state, Gujarat. No other state offers such an expanse of time—dinosaurs, Krishna, the Indus Valley (Harappan) civilisation, Eurasian migrants, Greek mercenaries, Arabs, Huns and Indo-Eurasian invaders, Siddi slaves from Africa, Sultans from Central Asia, Mughals, Marathas and the British. In times when politicians would like us to believe that India is a homogenous Hindu matrix threatened by Islamic and Western ideologies, trips like this remind us that India is a palimpsest of people, cultures and ideas. Hinduism is a river with many tributaries, not just Vedic. And India is a mightier river still, with even more tributaries, nourishing a way of being that is unique in these days of the hegemonic global village. 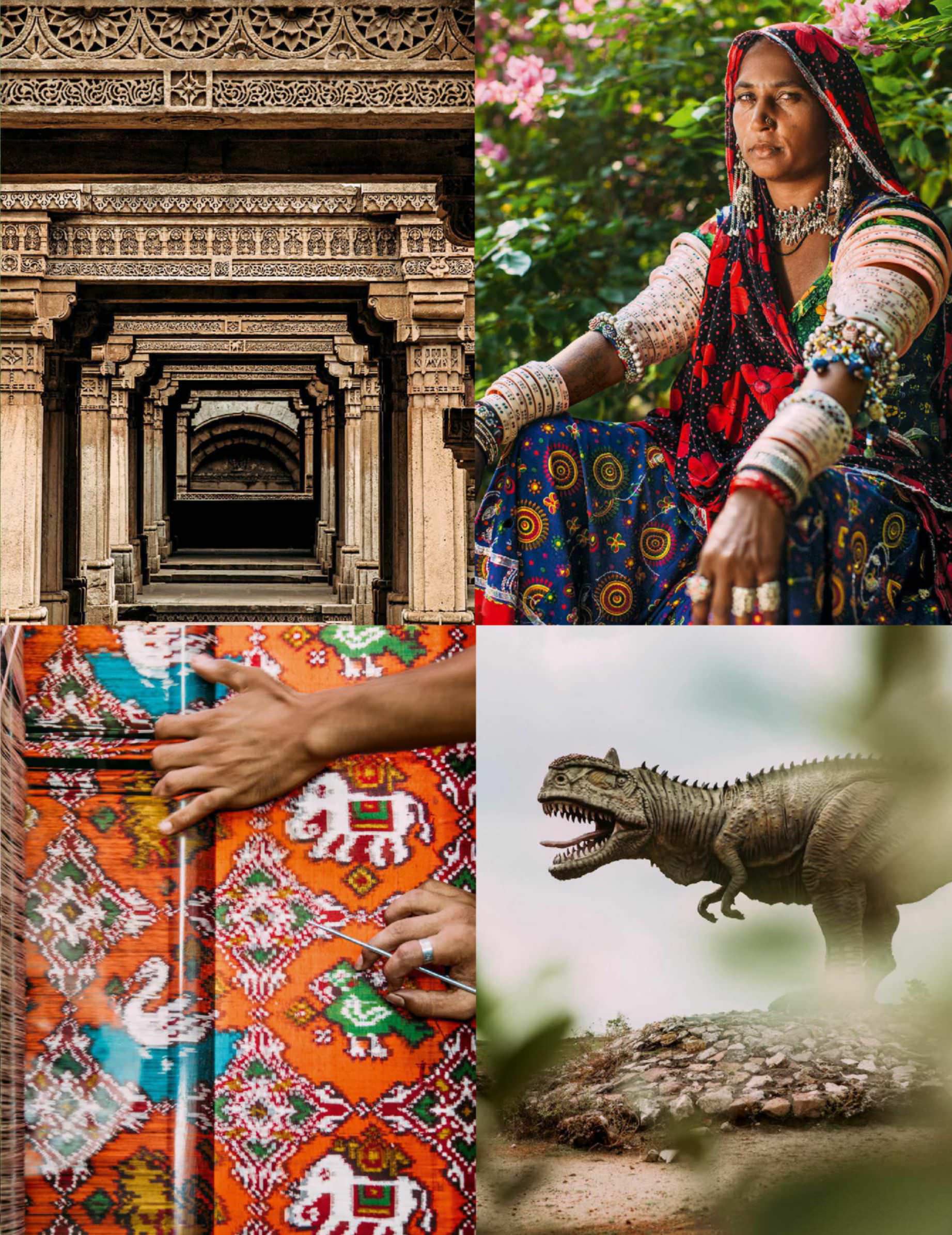 With a population of over 60 million people, Gujarat, India’s westernmost state, has a long coastline jutting into the Arabian Sea, that resembles a lion in profile: Kutch forms its upper jaw, Saurashtra the lower, while North, Central and South Gujarat are its eye, ear and neck. This is remarkable since it is the last refuge of the Asiatic lions, and has produced lion-like leaders such as Mahatma Gandhi, Mohammed Ali Jinnah, Sardar Vallabhbhai Patel and now Narendra Modi—men whose actions have shaped, and continue to shape, the history of India.

It also has two of India’s earliest cities: Dholavira in Kutch and the smaller settlement of Lothal. These were sites of the Indus Valley civilisation, which thrived over 4,000 years ago.