A River Of Stories 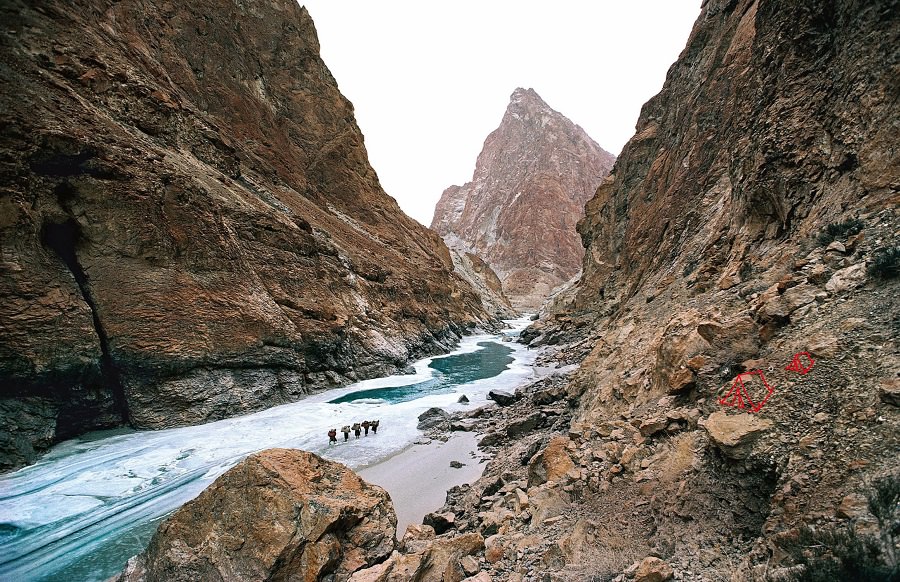 Manu Joseph treks the frozen Zanskar River in Kashmir and finds there is magic, beauty and humour even in the most arduous journey.

He says magic is a lazy way of telling a story. It is reasonable, then, that he would have quarrels with supernatural tales, like The Famished Road by Ben Okri, which opens with these words: “In the beginning there was a river. The river became a road and the road branched out to the whole world. And because the road was once a river it was always hungry.”

How can a river become a global road, and how can it be hungry? As in sports, he says, doping should be condemned in literature, too. But there are times when even a person like him accepts that magic poetry may describe an irrefutable reality. A truth that can be framed by a poet’s hallucination has to be exquisite—or terrifying. At the moment, what he feels is terror. He is about to walk on a road; the road was once a river.

In the winter, the rivers of the Himalayas freeze. There is one that becomes a narrow, serpentine road of ice. Beneath the ice, the river trickles, flows, gushes, but the surface is hard and the mountain people who live near its banks have learnt how to walk on it. And they walk great distances for mundane reasons. Sometimes they burst into a run even though they have time for everything. They carry enormous things on their backs or in a sleigh on which, among the utensils and vegetables, sit their children, who have blood-red cheeks as though they’ve been slapped. The snow leopards and foxes, too, know how to walk on the ice road.

He has, after not much thought, decided to walk on the frozen river for eight days. Much can go wrong. Because the road was once a river, it would be always hungry.

When he told his wife about the walk, she took him to see an ancient astrologer. Is there a fault in his stars, Masterji, that indicates death by drowning? Or by falling hard on ice, perhaps? Such mishaps have occurred on the river. The old sage, wearing a shirt too large and billowing trousers, made some rough charts and said, as though stating an obvious fact, “He is half-man-half-horse”. Across the table, the half-man-half-horse imagined himself as a creature with the upper half of an ass and the lower half of a Tamil software engineer. But a moment later, a more aesthetic, classical image came to him—of the upper half of a muscular man and the lower quadruped body of a horse. That was how he learnt he was Centaur.

Centaur was passing through a period of strife, the astrologer said.

“Is it then an inauspicious time for him to be walking on a river?”

“There is no such thing as inauspicious,” the astrologer said. “There is only time.”

The walk is known as the Chadar Trek. ‘Chadar’ means blanket in Hindi. A trail on a blanket of ice over the moving waters of the Zanskar River in the Ladakh region. That is what it is. If the ice is not well formed on the river, the blanket is deceptively thin in places and one may fall into the cold waters. If the ice is obviously thin, the trekkers have to walk on the walls of steep cliffs to reach the firmer parts of the river. On some stretches of the river, the cliffs are too steep for humans to walk on, so they have to wait for days before hard ice forms. According to a legend, if a couple makes love on the Zanskar, the ice on the river would not be thick. Centaur has faith in the ability of women to abstain from sex in almost extraterrestrial conditions, but he does not trust men to be wise.

A week after Centaur realised he was Centaur, one cold night in Delhi, as he shuddered beneath four layers of clothing, he checked the temperature. It was 4ºC. In the Zanskar region, the temperature can dip to -30 at night. The freezer of his refrigerator is at -18. What tropical Centaur had agreed to was a walk inside a gigantic freezer for several days and nights. He wondered if he should abort the walk. He needed an honourable reason to cancel the trip, like a fracture or a relative’s death.

But there were no misfortunes, and this morning he sits in a packed flight to Leh, a town in the Ladakh region of Jammu & Kashmir. This is his first trek.

As the plane soars over Delhi, he can see a small ridge below. The Delhi Ridge, just a few metres high, is the final, tame end of the oldest mountain range in India, the Aravallis, which are believed to have formed close to 1.5 billion years ago. In their youth, those mountains may have stood thousands of metres high, but now they are mere mounds or city pebbles. Is this the fate of all great mountains?

Centaur is going from the tip of India’s oldest mountain range to its youngest, the Himalayas, which are believed to have formed about 50 million years ago. 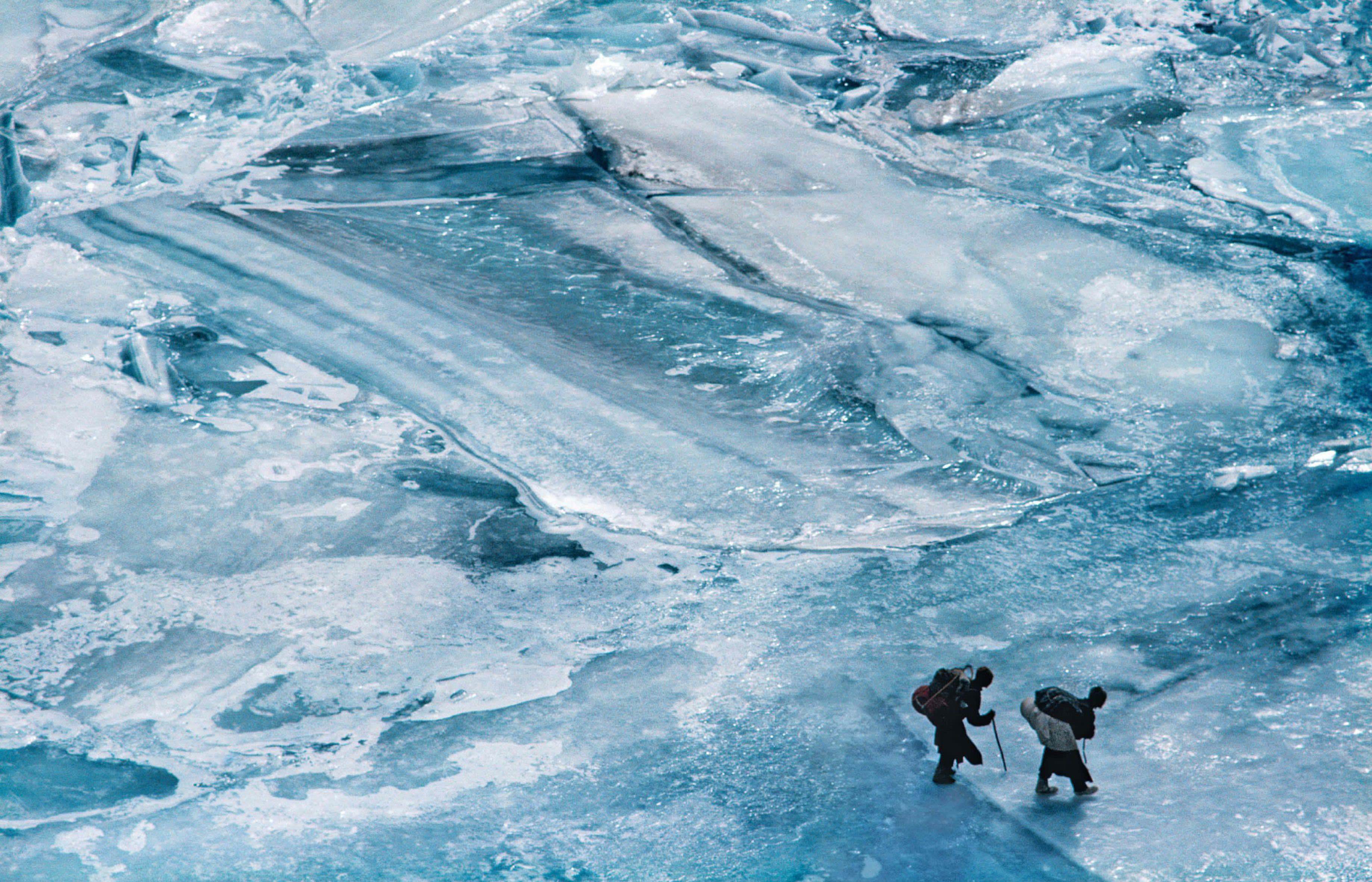 Leh is a tiny human settlement in the Himalayas, about 11,480ft above sea level. The air is clear, the sun harsh, the day lit like afterlife. Centaur feels as though his eyesight has improved. The eye sees great distances in Leh and what it sees are vast flatlands and desert mountains and many hues of brown. A notice in the tiny airport dissuades new arrivals from any exerting activity. It reminds him of an unfamiliar fatigue in his chest, as though he is in the embrace of a large, invisible woman. The fatigue grows as he reaches the hotel in the heart of Leh, a tourist district that is filled with cafés and shops on narrow lanes, most of them shut for the winter. Somewhere an ice hockey game is underway; two girls with long, flailing hair glide with the boys.

In the modest hotel, a small team of trekkers is assembled on the lawns, drinking hot tea. Among them are two men who suspect they are alphas. They are an uncle-nephew pair separated by less than 20 years, who possess the absolute Punjabi confidence in their assumption that everyone is interested in their anecdotes. All conversations are about their previous and future treks. After Chadar, they say, they are flying from Leh to Srinagar to snowboard on the slopes of Gulmarg.

The uncle is in his mid-forties and has a large paunch, which should reassure everyone that adventure need not be the privilege of the fit alone. Everyone calls him Mamu because that’s what his nephew calls him. Mamu manufactures crankshafts in Aurangabad, where he lives. His nephew is Bhanja, who imports chemicals. Bhanja, who is bearded, stylish and lean, with a mop of silky hair, is in his late twenties. He is asthmatic, but the condition does not dissuade him from long arduous treks. He once walked to Stok Kangri, one of the few summits in the Himalayas that can be reached without rock- climbing even though the peak is over 16,400ft above sea level. He realises that his achievement is diminished by the fact that he could get a mobile signal on the summit. “Very faint signal and only in one spot,” he says. After over 10 days of trekking, when he finally reached the summit, he took out his phone and called his girlfriend, who said, “Can I call you back? I am in a meeting.” After he got off the mountain, he broke up with her.

He is on Tinder, and observes that there are some women in Leh who are on the dating app. “But they are girls from Delhi who are probably here for the Chadar Trek.”

Among the trekkers are two farmers. One grows rice and genetically modified cotton in Haryana. The other was once an insurance executive. (“Housewives are not insured for high sums because they would get murdered.”) All through his working life he saved, never bought a car (“I never buy anything that depreciates in value.”) and accumulated over 100 acres of land in Andhra Pradesh where, in a portion, he grows eucalyptus trees.

And there is one middle-aged Gentleman from Delhi. (“It is politically incorrect to use the term ‘Eskimo’. ‘Inuit’ is better.”) He procures organic produce from villagers and sells it to the urban consumer.

A young woman, an ad film-maker from Mumbai who was once a state-level rower, is missing at the table. She enters the scene a few minutes later, without disturbing the air around her. She exhibits the amused acceptance of a woman who has always been regarded as ‘one of the boys’. And she plays the part. (“I never use sunscreen.”) In a few days, an old Dutch trekker on the frozen river, struck by her face, would call her Cleopatra.