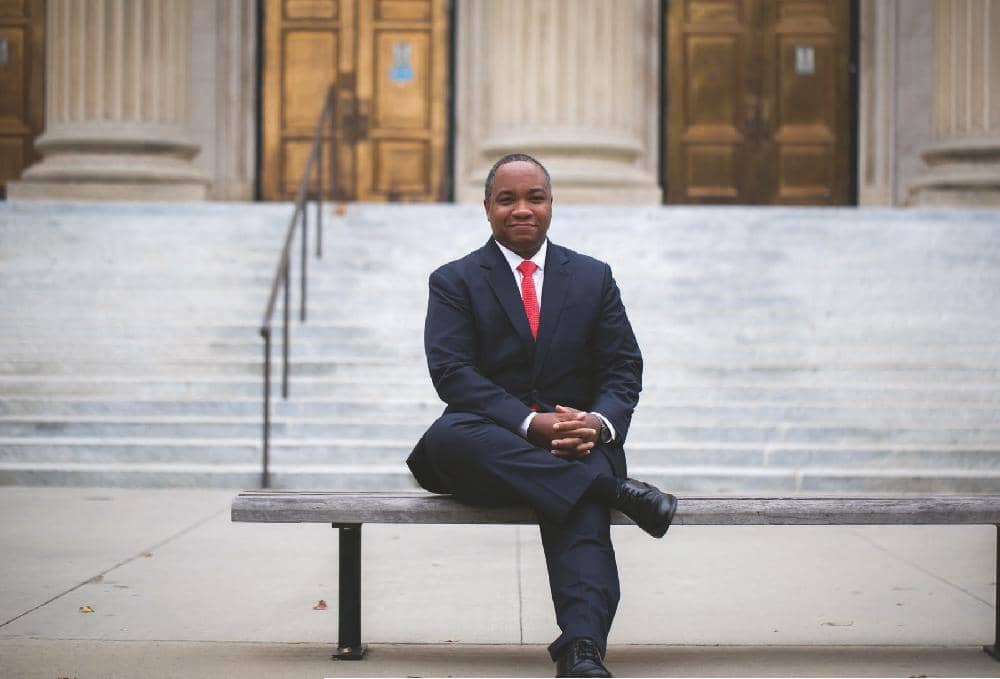 Last year, Charlotte registered its most homicides in 26 years and a dramatic surge in gun violence. The district attorney, the first person of color to hold the position, has adjusted to combat the spike—and called on North Carolina to recognize that criminal justice in our growing cities can’t be done the old way anymore

GREG LACOUR
WE TAKE THE ELEVATOR to the basement. “Now, these are closed files,” says Spencer Merriweather. “The open files are spread throughout the office.” We disembark, and Merriweather opens the door to the archives, what you might call the Hall of Shelves and Boxes. You can’t see the end of it.

“I mean, this is what we’re dealing with,” he tells me, as we step between cliff faces of cardboard boxes jammed with paper. We pass some of the greatest hits of the Charlotte district attorney’s office—here’s the 16-box collection from the trial of serial killer Henry Louis Wallace, the “Taco Bell Strangler,” in the 1990s; and here’s the Rae Carruth case, 19 boxes that have filled space on the shelves since the ex-Carolina Panther’s murder-conspiracy conviction in 2001. Carruth finished his sentence in 2018, but the paperwork remains in prison down here—where, on a drizzly February morning, an industrial dehumidifier runs in one corner to offset a leak from the ceiling.

“Now what happens is, we’ll send some of these and put them on microfiche or send them someplace,” says Merriweather, the district attorney in Mecklenburg County since 2017. “But we’re all based on paper here. For most court systems, this is highly unusual. If you go to any of our ADAs’ desks, they’ve got files and files of this stuff. You go to California, everybody’s walking around with iPads.”

Merriweather is not saying he wants new gadgets for himself and his staff because that would be nice, although it would. He’s not saying the monoliths of stacked boxes in the basement are a nuisance, although they are. He’s saying that Charlotte is the 17th-largest city in the United States and that more than a million people live in his jurisdiction—North Carolina’s 26th Prosecutorial District, i.e., Mecklenburg County—in the ninth-most-populous state. He’s saying that the state’s cities—Charlotte, of course, but also Raleigh, Greensboro, Winston-Salem, Durham—are bursting with people who have moved here from around the country, and that means more people in the criminal justice system, and that system is running more or less the same way it has since the days when North Carolina was home mainly to textile factories and hog and tobacco farms. He’s saying that system no longer works.

Merriweather said so in late January during a news conference he called to announce his office’s response to a surge in gun-related violence and the 2019 homicide total: 107, the highest in Charlotte in 26 years. He announced his plan to bring 20 homicide cases to trial in 2020, up from 13 in 2019, and to emphasize prosecution of gun crimes after an investigation by The Charlotte Observer revealed that more than half of Charlotte’s murder suspects in 2019 had been charged before with weapons crimes, and that most of those were dismissed. The larger issue, he said, is the General Assembly’s failure to respond to the specific, and swelling, needs of North Carolina’s cities. Prosecutors’ offices are underfunded, he says—a common complaint from district attorneys everywhere but warranted in Mecklenburg County, where local governments pay for more than a quarter of the office’s 85 technically state-employed prosecutors.

But criminal justice in urban areas, Merriweather said, requires more than just additional money for prosecutors, public defenders, and court clerks. Reform-minded prosecutors around the country recognize the need to stretch into spaces beyond the courthouse—for example, to establish community courts in neighborhoods; employ staff members who speak languages other than English; and adopt technology, like iPads, that allows for the quick transfer and review of criminal records. In Charlotte and other North Carolina cities, reliance on paper records and a hodgepodge of antediluvian computer programs wastes valuable time and, Merriweather insists, undermines the pursuit of justice. Lawyers and judges suffer, but so do defendants, witnesses, and, most important, victims.

During the news conference, Merriweather said his and others’ suggested reforms shouldn’t be thought of as luxuries for prosecutors or sops to criminal defendants. “This is not just about hugging it out,” he said. “We are seeing something happening in all of North Carolina’s urban centers, and it’s time for government to reflect the system we have. What is equal is not equitable. We call on the state to wholly reconsider the way large urban centers are staffed and resourced in the administration of justice.”

Wholesale reform would take years and millions of dollars, and the COVID-19 outbreak in March forced the DA’s office to shut down most of its operations and wait it out like everyone else—which corralled Merriweather’s plans to more aggressively prosecute homicides and weapons cases. When we speak again in early April, he estimates that his office will have to reschedule at least two and as many as five murder trials because of an April 2 order by state Supreme Court Chief Justice Cheri Beasley that postpones court proceedings until June 1. Courthouses statewide remain open, but under limited hours and with skeletal staffing; Merriweather says he maintains a minimal staff in the office and tries to conduct as much business by videoconference as he can. “Just because the (Supreme) Court says court sessions are down, it doesn’t mean that we’re not getting new rapes and new murders and new burglaries,” he tells me. “They’re still coming in the door, and those cases need to be reviewed.”

The virus will eventually subside. Barring changes, the structural issues in the court system won’t. When we meet in February, I ask Merriweather what he meant during the January news conference when he said, “What is equal is not equitable.”

“It is the craziest thing in the world that you would try to treat every single county in North Carolina the same, proportionally, when all of us face so many different, unique challenges,” he replies. “That’s the issue.”

EVEN BEFORE THE VIRUS, the courts weren’t as active as they could have been. It takes about five minutes to walk the long block from the DA’s office, in the old Mecklenburg County courthouse at East Trade and South Alexander streets, to the new courthouse at East Fourth and South McDowell, which opened in 2007. On the day we meet in February, Merriweather and I walk up Fourth Street in the rain. “I can talk about this all day,” he says. “But until I’m able to walk people around and explain what sort of constraints we have here in our justice system, it’s hard for them to understand it. The court system is one of those things where, as a citizen, you kind of want to know that it’s there. But you’d rather not fool with it if you don’t have to.” We enter through the back and ascend to the fifth floor, reserved for Superior Court judges to preside over felony cases.