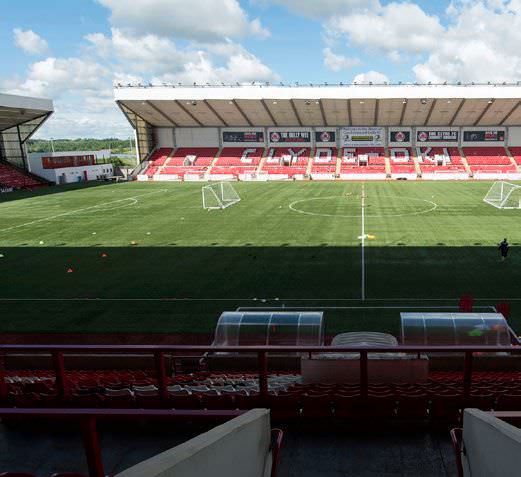 IN this season’s Celtic View we are taking a trip each week to grounds where the Hoops have played on their travels. This week we visit Clyde.

Celtic first made the short trip down to the old Barrowfield Park in Bridgeton on league duty on August 29, 1891. The venue had been used by Brother Walfrid, though, for charity games, with the likes of Hibernian and Dundee Harp visiting even before Celtic were founded. The Bhoys had played there before this league meeting, but this was the first competitive game and the Celts ran out worthy 7-2 winners with Sandy McMahon having a real day to remember by scoring no fewer than FIVE of the goals. The 10,000 crowd also saw the other two goals scored by Neilly McCallum and Alec Brady in what was Celtic’s biggest win that season in the two main competitions. Celtic did have better results in the Glasgow Cup that term, including 11-1 against Kelvinside Athletic, 9-2 over Linthouse and 7-1 against Clyde in the final, played in front of 6,000 at Cathkin Park.

We completely bypass Clyde’s longest-serving ground, Shawfield, and head to Broadwood for the most recent away game against the former Glasgow side, and it wasn’t a very good day out for Celtic. It was in the Scottish Cup on January 8, 2006, and both Roy Keane and Du Wei made their debuts for the Hoops but lost 2-1 to the First Division side. Clyde had two ‘goals’ chalked off before they took the lead in the 32nd minute through Craig Bryson. Just four minutes later, the home side were 2-0 up through Eddie Malone. Maciej Zurawski pulled one back eight minute from the end, but it was too little, too late. In what was Celtic’s last league game ever at Shawfield on September 7, 1974, Clyde, with former Celt, Evan Williams in goal were 2-0 up at half-time. However, goals from Kenny Dalglish, Vic Davidson, Pat McCluskey and Bobby Lennox gave the Hoops a 4-2 win.