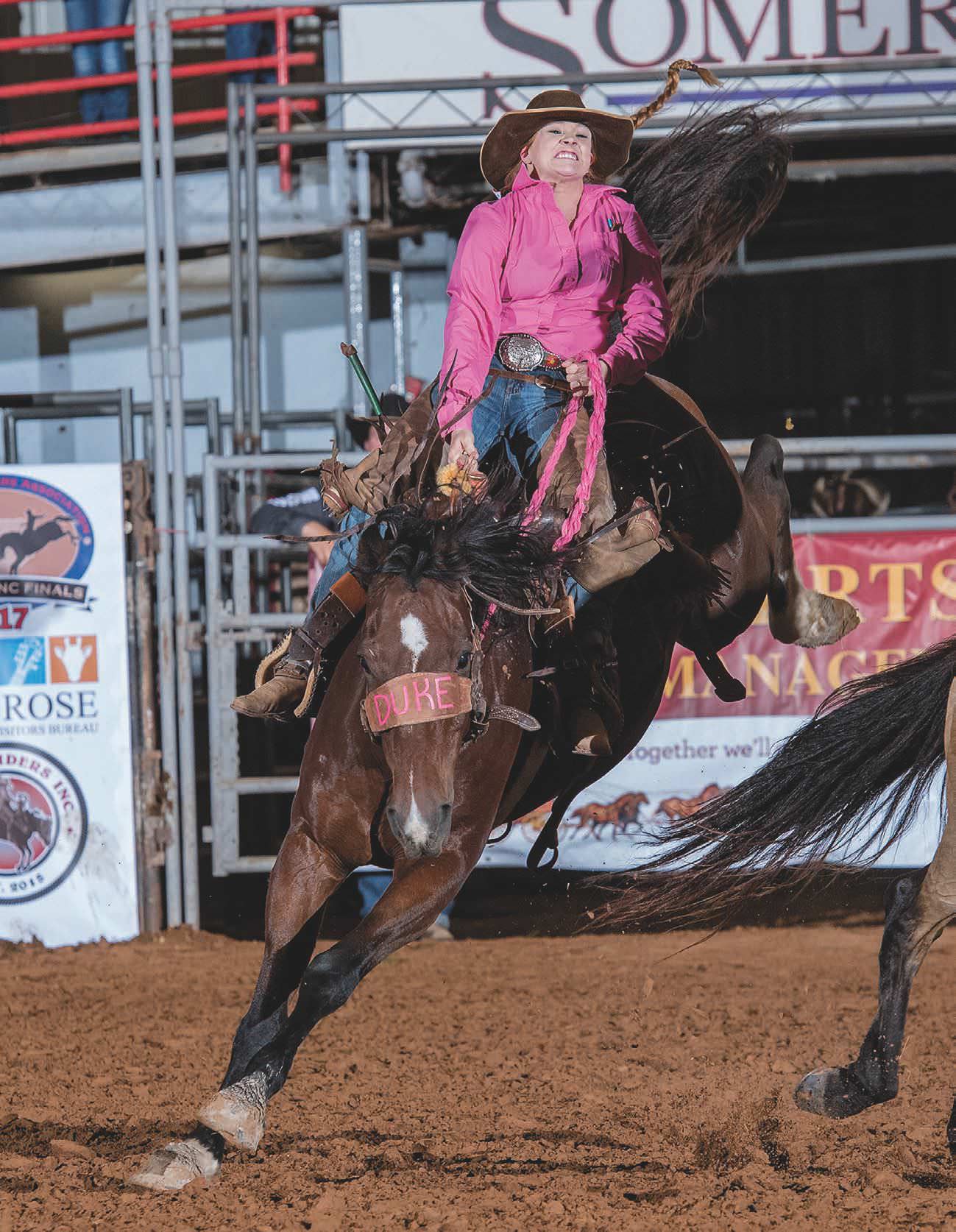 “I’ll Be Lookin’ for Eight When They Pull That Gate,” George Strait Croons in Amarillo by Morning, “and I Hope That Judge Ain’t Blind.”

This judge ain’t blind, but he may well wonder if his eyes are playing tricks on him.

The rider easing down onto the bronc in the chute is not some wiry, scruff-bearded cowboy, but a rodeo-queen-beautiful young woman. A gaggle of other gorgeous gals stand behind the chute, encouraging the soon-to-be-sprung cowgirl who’s atop 1,200 pounds of well-muscled wild fury.

Just as Virginia Woolf made her mark in the man’s world of literature, Madonna made hers in pop music, and Lindsey Vonn did it in skiing, a small-but-fierce group of cowgirls are lookin’ to do it in bronc riding … eight seconds at a time. They’re here at the Somervell County Expo Center in Glen Rose, Texas, for tonight’s big event, the Texas Bronc Riders Association’s (TBRA) 2017 Finals, in which they’ll compete in the Ladies Saddle Bronc Finals.

Thanks to these spunky gals, Ladies Bronc Riding, which has been on rather a lengthy hiatus of, say, 80-some-odd years is roaring back to life.

Some are ranch-born cowgirls, of course. Some competitors are horsewomen from as far away as Kentucky and Virginia. One’s a roller-derby queen. But once they drop themselves into the saddle of a bronc in the chute, they enter a rarified stratosphere occupied nearly 100 percent by men— bronc riding—and become members of an elite sisterhood.

Not only are these gals serious competitors, they’re also nascent reality-television stars of RIDE TV’s docu-reality series “Cowgirls,” which launched in October 2017. As COWGIRL magazine is a sponsor of the RIDE TV series, I’m invited behind the chutes to visit with the contestants as they prepare their gear and themselves for their rides. 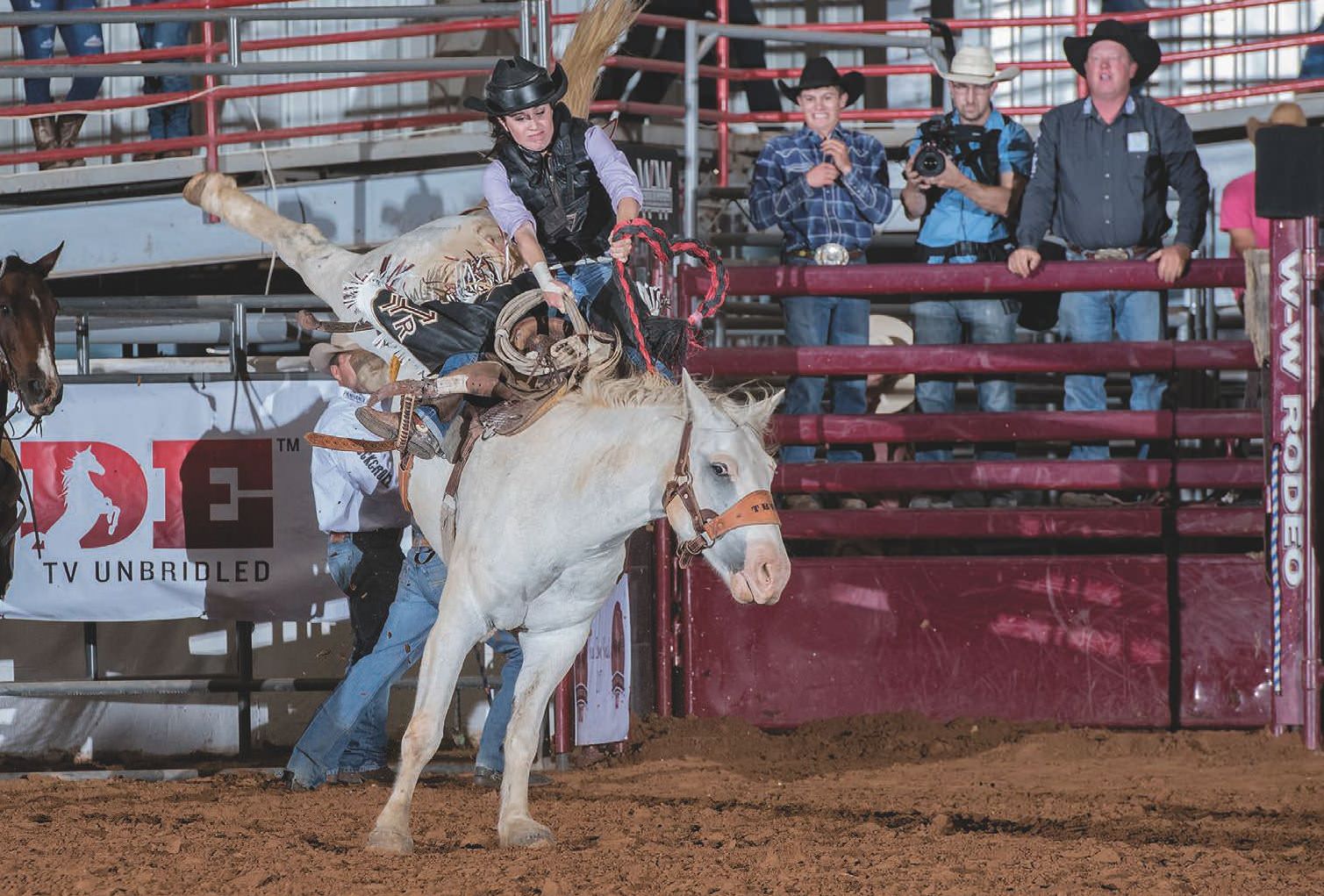 Twenty-five-year-old Montanan Brittany Miller, two-time winner of Colorado’s Iron Woman Ranch Bronc Riding Invitational, is the leading money winner to date in the TBRA series of events, and an odds-on favorite tonight. Behind the chutes, she’s hunkered over her saddle, buckling on a cinch. With her buckaroo chinks, tooled leather vest over a blue tick-striped shirt, and straight flaxen mane spilling out from beneath a buckaroo-style brim, Miller’s calm in that quiet-but-deadly Clint Eastwood sort of way. On a bronc, she’s the spittin’ image of a vintage cowgirl bucking bronc poster come to life, chin down, hips deep in the saddle, fringe flying every whichaway; “Lady Badass,” as she calls herself.

In her third year of college at the University of Montana Western, where she was pursuing a degree in Natural Horsemanship, Brittany climbed atop her first bucking horse, discovering that it felt almost like second nature to her.

“Riding broncs has made me a better person,” she says. “I’m more outgoing, more confident, more in control.” And as physically challenging as bronc riding is, Miller believes that her mental game is equally important.