Work-Life Balance: My Time, Your Convenience 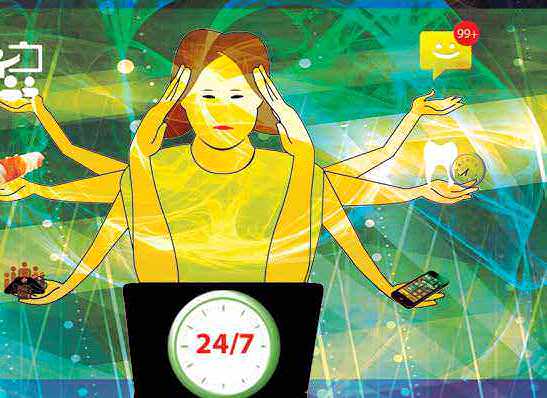 Janki Vallabh sat in her car looking devastated. She had been so lost in her world of workshops and training and support and schedules and rearranging and rescheduling and teaching and discussing... even arbitrating... that she had clean missed an SMS that had been coming to her day after day after day. Her batch mate from B-school, Raghu Mani had been struggling with his mother’s ailment and had been messaging her daily in a manner of reaching out. Janki had read them and tried to remember to call but her memory eluded her and she ended up remembering them late. Finally, in two of his recent SMS-es he had mentioned the prayer meeting for his departed mother, asking Janki to be present. “She was your music teacher and she remembered you a lot during her last days...”

Janki had not meant for things to come to such a pass. Never, never at all. She was being bounced from wall to wall without a moment to inhale. And being in sessions almost all day she had left her phone with Mercy, her assistant, in case Ma called. And by the end of the day, another 100 SMS-es (of which at least 40-60 would be idiotic offers to lose weight or speak in public fearlessly or buy property at rock bottom prices in Noida or Nellikupam ... these idiotic messages had buried Raghu’s reminders.

How was she to face Raghu? Would she tell him, ‘Gosh Raghu, I have been so busy...?’ This was precisely the kind of moment that told her the foolishness of a life like hers. Often, when she dozed off in her car driving interstate, she would surface during her semi-aware state and remember Wilfred Owen ask, ‘Was it for this the clay grew tall?’(‘Futility’)

Yet she had been so charged and driven by doing all that her work demanded, work that brought meaning to the lives of so many at Teffer, who wished to get ahead as career people, as functionaries, as managers, as leaders... their needs spurred her into more action, not out of a sense of wanting to glow in their darkness — not at all; but to see them climb out of various states of ‘I cannot’ to ‘Oh, I can do it!’ and in the process, make Teffer a far more efficient place.

Someone had once accused her of lacking a life... that maybe there was something missing which she was trying to fill with work... Janki had nodded then and said that it was possible. And it was all right to fill gaps with work you enjoy, and everyone who lacked something should fill the gap with that which fills the gap and not wallow in the empty spot.

...but Janki was devastated that Raghu’s mother, ‘Music maami’ as she was always known, had been ill and then passed away and then she had missed the prayer meeting. She had met Raghu and his wife just now and they had been very affectionate and understanding. Raghu had quit corporate life six years ago to set up a music studio, and in his words, ‘a pony tail and long beard later, without the artifice of an organisation, I am more free and happy...

She too was. Except her brand of ‘happy’ was different.... As she started to reach out to her various groups in the UK, Europe, US, China, Australia, New Zealand, Africa and the Middle East, she felt she was building good relationships, and the odd hours of day and night didn’t matter...for performance was improving, people were feeling fuller and happier and line managers were more deeply concerned with the needs of their staff.

Janki had a number of self-doubts that rose during moments when she missed a social or family event. She had begun to notice that her day started at 8 a.m. and often ended at 10 p.m., only to resume at 10.30 p.m. again. True, she found no time to connect with friends and family or external networks or even herself... her mother remained her biggest most preoccupation outside work.

Yet, she felt aware that she had missed Raghu’s grievance, missed being with her music maami during her last moments. Much as she hurt, she also knew her life pattern was fixed. Ma had chided her lightly for being so immersed in work. But Janki had reacted, “Ma, I don’t want this to have happened; your getting annoyed is not making it any easy, my work has consumed my life, I am almost on auto pilot, what should I do, quit?”

Today, she visited Raghu and was embarrassed to see herself fret as her schedules fell like dominoes, as a result. She was telling Ahmedbhai every 10 minutes, jaldi chalte hain, ok? Jaldi wapas aanaa hai, do meeting hain, Ma ka programme hai nau baje, record karna hai... and she was taking calls on the drive, so people wouldn’t get nose out of joint!