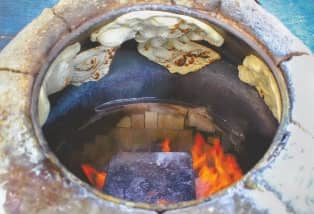 No, it’s not just an oven for flabby broiler chicken tikka. It is India’s contribution to the global barbecue tradition.

The great Spanish chef Dani Garcia was in India a couple of weeks ago to cook at a pop-up. He ate his way around Delhi and Agra but the highlight of his stay may have been dinner at Bukhara.

Most chefs and foodies, all over the world, have heard of tandoori chicken (or, if they are Brits, of Chicken Tikka Masala) but I don’t know how many of them fully understand the concept of tandoori cooking.

In 1985, Jean André Charial (who then had three Michelin stars at Baumaniere in the South of France) visited India as part of a group of 20 French chefs. While most of the chefs had no clue what they were eating during the trip (“eet all looks ze same”) and left without understanding Indian food (“is too hot!”), Charial was fascinated by tandoori cooking, ordered a tandoor and took it back to France.

Other Western chefs have ignored the tandoor till recently. Manish Mehrotra, India’s greatest chef, has become a crusader for our styles of cooking as his global fame has spread. And Manish now has a collection of photos of big-name global chefs (in the Heston Blumenthal, Daniel Humm league) who have visited the Indian Accent kitchens and made naans in the tandoor with their own hands.

But the average non-Indian chef has no idea of the magic of tandoori cooking. Most think of the tandoor as an oven, and not much more. Food textbooks usually describe it as a clay oven but the tandoors at many Indian restaurants abroad are not made of clay so this further confuses Westerners.

And I always believe that the description of a tandoor as a mere oven kind of misses the point. Garcia, who has a global empire of restaurants and understands many international cuisines, got it immediately. He noticed that the Bukhara tandoor used charcoal (from wood) and recognized that the flavors it imparted to the food were significantly more delicious than the tandoori food he had eaten at other places.

In fact, most Indians also miss the importance of charcoal in adding flavor to tandoori food which is why many tandoori kebabs in India and especially, abroad, are so mediocre.

Garcia and his team of chefs got the point. They were so fascinated with the Bukhara food that they spent 20 minutes in the kitchen, interrupting their dinner to try to understand the cooking process.

MORE STORIES FROM BRUNCH MUMBAIView All