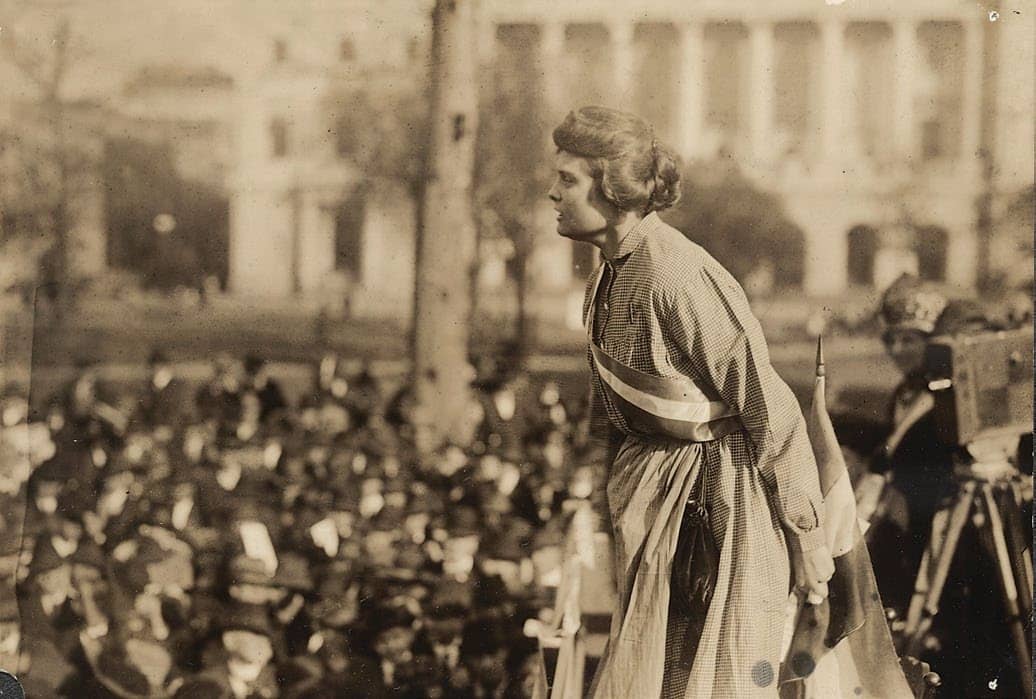 Baltimore and Maryland women stood on the frontlines of the suffrage fight.

The afternoon’s events began when women from several states in the West and Midwest, already granted the right to vote, were invited to an informal meeting with President Woodrow Wilson at the White House. Afterward, those in the delegation on September 16, 1918, lavishly praised his words of support for universal women’s suffrage in the United States.

“I am, as I think you know, heartily in sympathy with you,” Wilson told the visiting women. “I have endeavored to assist you in every way in my power, and I shall continue to do so. I will do all I can to urge the passage of this amendment by an early vote.”

It sounded good. But the members of the more militant National Woman’s Party, based in Washington, D.C., including suffragists from Baltimore and Maryland, were not impressed when they received a copy of Wilson’s remarks two hours later. The president’s words fell far short of a promise of passage for what had become known as the “Anthony Amendment”—in honor of renowned women’s rights activist Susan B. Anthony—which had first been introduced some four decades earlier. In the spring of 1918, hopes had been briefly raised by similar encouragement from Wilson. Then, Senate leaders from his own party were once again allowed to filibuster the amendment.

For more than a year and a half, the National Women’s Party had been stationing “Silent Sentinels” to picket near the White House gates. The slogans on their banners highlighted the hypocrisy of Wilson zealously campaigning for democracy around the world while doing nothing to guarantee voting rights for half of his own country. The Sentinels braved cold and snow, spring downpours, Washington’s swampy humidity, as well as assaults by mobs angered that they had the audacity to criticize the president while the country was at war. They also faced arrests and increasingly harsh prison sentences, including abuse and solitary confinement at the infamous Occoquan Workhouse. They protested their conditions inside the prison with hunger strikes, and some prisoners, including women’s rights leaders Alice Paul and Lucy Burns, endured three-a-day force-feedings.

Now, some 40 members of the National Woman’s Party marched from their headquarters to Lafayette’s statue across from the White House, with their purple, white, and gold banners held high. There, 26-year-old Baltimore suffragist and NWP field organizer Lucy Branham held aloft a copy of Wilson’s recent statement in one hand and a flaming torch in the other. Branham, raised by a staunchly suffragist mother and physician father, had gotten involved in voting rights activities since earning her graduate degree from Johns Hopkins University. She’d been arrested during the silent picketing at the White House a year earlier and served two months in the District’s jail and Occoquan Workhouse.

Then, she set a copy of the President’s statement ablaze.

“The torch which I hold,” she announced, according to dispatches that made national news, “symbolizes the burning indignation of women who for a hundred years have been given words without action.”

Branham would later participate in the NWP’s “Prison Special” tour of 1919 (see photo), when women who had been jailed for their activism traveled the country, typically in their prison dresses, to speak of their experiences. Her mother, also named Lucy, was later arrested as well.