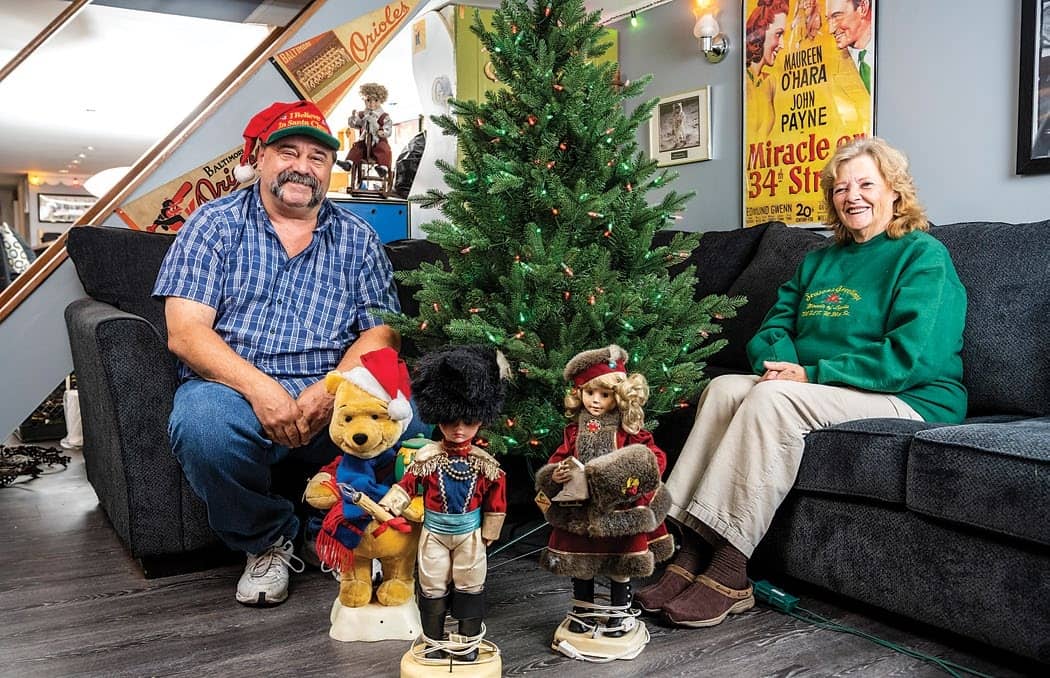 After decades of spreading holiday cheer, the Miracle on 34th Street tradition shines on.
Kaitlyn Pacheco

Bob and Darlene Hosier have enough Christmas decorations to deck out four houses, top to bottom. Over the past few decades, the couple has adorned the front of their three story rowhome with countless strings of lights—along with a rotating cast of bright snowmen and wreaths, an inflatable purple hippopotamus, vintage Christmas dolls, and a handmade replica of the train garden from It’s A Wonderful Life—and hundreds of thousands of people have traveled to their home on the corner of a sleepy Hampden block to see it.

“It’s just some Christmas lights,” grumbles Bob, repeating the phrase over and over in conversation. The 62-year-old has given this response to countless people over the past few decades—reporters, grocery store clerks, documentary filmmakers—who ask him why Hampden’s Miracle on 34th Street tradition has become a local and national phenomenon that’s now woven into the narrative of Baltimore’s quirky character.

Sometimes, when Bob repeats the phrase, he pulls on the ends of his graying handlebar mustache; other times, he gently slaps the knee of his worn-in blue jeans for emphasis. It doesn’t matter how many times or in how many ways he repeats it, he says, there will always be people who don’t get it. People who question why he and his neighbors living on the 700 block of W. 34th Street spend the weeks between Halloween and Thanksgiving decorating their front porches, stoops, and lawns with over-the-top holiday light displays. People who don’t understand how the residents deal with the tens of thousands of strangers who pack the block during the holiday season to take pictures of “the most outrageous Christmas lights in Maryland.” People who press them about what kind of break they get on their electric bills or whether they get paid for their appearances on HGTV, CNN, or the homepage of Bing.

But it’s never been about the cost or the publicity, although Bob understands why no one can believe that he and his neighbors do all of it—the planning, purchasing, decorating, hosting—for absolutely no money. The Miracle on 34th Street tradition is simply how Bob and his neighbors decorate for the holidays, and no matter how the block and its residents have changed through the years, that sentiment stays the same—at least as long as Bob has a say in it. “I’m just a guy who puts up some Christmas lights,” Bob says. “I can’t help that the whole world shows up to see them.”

The story of how the tradition started is a tale almost as time-honored as Christmas itself. In the early 1980s, Bob, who was working as a meat cutter at Kash & Karry at the time, fell in love with Darlene, who was working as the grocery store’s head cashier. The pair tied the knot in 1983, and Bob moved into Darlene’s three-story rowhome on W. 34th Street’s 700 block, where she has lived for all of her nearly 70 years.

As a young married couple, they realized they shared an affinity for Christmas decorations during their first holiday season. Bob, who grew up decorating the outside of his parents’ house in Northeast Baltimore with as many multicolored lights as possible, asked Darlene if he could add some twinklers to the outside of the house. Her father, who purchased the home in 1947, had always decked out the home’s exterior during the holidays, and Darlene had carried the torch since his death, but Bob took it to a new level with themed displays, illuminated figures, and even a full-sized tree on the roof. “To any rational human being, what I do during the second half of the year to prepare to decorate would be too much work,” Bob says. “To me, it’s just getting ready for the holiday.”

In the early 1990s, Bob rigged a speaker system so they’d have Christmas music playing along with the lights. Their neighbor across the street wanted to be able to enjoy the holiday tunes from his house, too, so Bob wrapped a speaker wire around a string of lights and ran it along the light pole that adjoins the two houses. Other residents on the block admired his handiwork, and before long, Bob was going from rowhouse to row-house installing hooks on his neighbors’ roofs and draping lights to connect all 25 homes on the block.