HOW TO FIX BALTIMORE 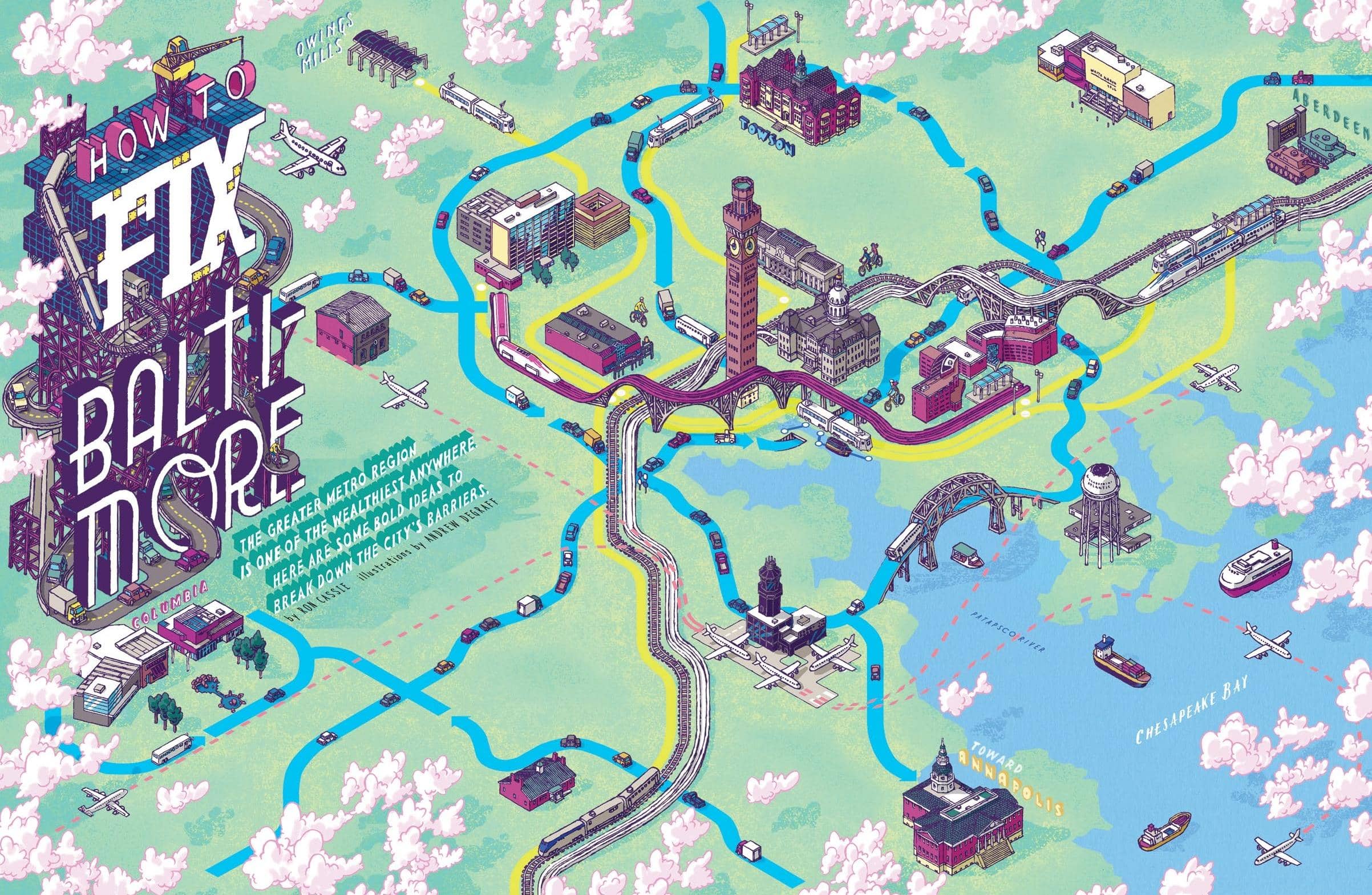 THE GREATER METRO REGION IS ONE OF THE WEALTHIEST ANYWHERE HERE ARE SOME BOLD IDEAS TO BREAK DOWN THE CITY'S BARRIERS.

BETWEEN A ROCK AND A HARD PLACE

AFTER DECADES OF ISOLATION, SEGREGATION, AND STAGNATION, THE HARD BOUNDARIES IN AND AROUND BALTIMORE NEED TO COME DOWN.

The march of floats, fire trucks, and drum and bugle corps drew some 30,000 spectators to stoops and sidewalks from Falls Road to Keswick Road. Lottie Carnell, just 17, was named “queen” of the massive parade, and the teenager and her court led a nearly two hour romp through Hampden’s balloon-filled “jubilant streets,” according to press accounts. Afterward, there was public dancing late into the night on the closed-off streets of Elm and Hickory, just off The Avenue.

The twilight fete, including a bonfire, in the summer of 1948, capped off three days of celebration. Not to commemorate the end of a war, the community’s founding, or even an Orioles championship—the O’s were still a minor league club then—but, wait for it, the 60th anniversary of Hampden and Woodberry’s annexation from Baltimore County into Baltimore City. Hooray, indeed. Who could imagine Charm City today without those neighborhoods’ vital commercial districts, repurposed mills, and quirky “Hey, hon” vibe?

Less than five months later, an overlooked referendum —written by a Baltimore County politician at the behest of the local Democratic party machine— ensured there would be no more Hampdens and Woodberrys annexed into the City of Baltimore. Or for that matter, any other Highlandtowns, Lauravilles, Violetvilles, Ashburtons, Howard Parks, or Roland Parks. All those neighborhoods, among others, had been annexed from Baltimore County and into Baltimore City (along with roughly 50 square miles of Anne Arundel and Baltimore counties) decades before the Hampden-Woodberry-Baltimore City lovefest.

The change to the state constitution may have appeared innocuous. It merely required that a majority of residents living within the annexation area approve annexation. In fact, it was not. There had been a decade-long fight prior to the massive 1918 annexation, which, like previous annexations, enabled Baltimore’s jurisdictional reach to follow commercial and residential development as it inevitably expanded over the city line. Baltimore County powers behind the 1948 referendum intended to close the gates around the city, one of the densest in the U.S. at the time. The passage of the measure, as intended, meant the commercial growth, new schools, and residential property taxes in the booming ring of post-WWII suburbs and towns—subsidized by state and federal tax dollars as well as racially discriminatory housing practices and G.I. Bill and FHA lending policies—would forever remain beyond the city/county partition.

It is no coincidence that Baltimore City’s population topped out two years later in the 1950 census and has been shrinking ever since. Subsequently, it has become one of the smallest major cities in terms of square miles. The closing of the city border was part of an even broader political effort that George Romney— the father of the Utah Senator Mitt Romney and Richard Nixon’s first Housing and Urban Development secretary—once characterized as a “high-income white noose” placed around the nation’s urban core. Romney had seen it play out in Detroit when he served as governor of Michigan.

From the approval of the ’48 referendum to the end of the last century, Baltimore County quadrupled its population and surpassed the city. (The restrictive 1924 Immigration Act, which plummented immigration to historic lows until the 1970s, didn’t help cities like Baltimore replace its losses, either.) Not surprisingly, the income gap—virtually nonexistent between the city and county in 1950—widened exponentially. Entire neighborhoods of low-income families were boxed in by segregated public housing that lacked effective public transportation and access to livable wage jobs, which were departing to the county as well, but also for the non-union Sun Belt and later to Mexico and China.

If you wanted to create a city plagued by segregation, you could not have planned it better. By 1993, in his seminal work, Cities Without Suburbs, urban expert and former Albuquerque Mayor David Rusk described Baltimore and other “inelastic” Rust Belt legacy cities, including Cleveland, St. Louis, Milwaukee, Newark, and Camden, as beyond the point of return without dramatic restructuring and regional governance. Targeted “urban” programs such as empowerment zones—no matter how well-intentioned— would never move the needle. Three decades later, the book—and its 1995 follow up, Baltimore Unbound—remains prescient. There were six Baltimore City census tracts where poverty was above 60 percent in 1990; that number had not budged by 2015, the year of Freddie Gray’s death and the subsequent riot and uprising.

Meanwhile, thriving “elastic” cities such as Charlotte, Jacksonville, Raleigh, Indianapolis, Nashville, Austin, Houston, Columbus, Madison, and Albuquerque expanded their footprints anywhere from more than 250 percent to 2,000-plus percent from 1950 to 1990. Baltimore football fans will recall Charlotte and Jacksonville beat them out for NFL expansion franchises in 1993.

“It’s hard to think, looking back, of any single public decision that’s proved to be more important to Baltimore City than that question in the 1948 election,” former City Councilman and current Abell Foundation president Robert Embry told Baltimore years ago. “It was a very shortsighted decision.”

In hindsight, there was frustratingly little coverage of the 1948 anti-annexation referendum. The Truman-Dewey presidential race and 22 other ballot questions—including funding for Memorial Stadium, a term limit for Maryland governors, and a Red Scare measure forbidding officeholders who advocated the violent overthrow of the government—overshadowed the proposal. That said, alert city activists, leaders, and The Sun’s editorial writers recognized the referendum spelled trouble.

A sharp, opinionated gadfly known as “Mrs. B,” a thorn in the side of a half-century of City Hall administrations, called the annexation referendum “ridiculous.” Famous for her election-eve broadcasts, Mrs. B (real name: Marie Oehl von Hattersheim Bauernschmidt) correctly declared passage would “prevent the development of the city.” “Suppose,” she said, “annexation [into the city] had been unlawful and our boundary line would’ve been 25th St.?”

City residents agreed. They voted against the measure by a large count. Baltimore County, however, in what seems a suspiciously high 93 percent turnout looking back, voted in favor by more than 5 to 1. The huge numbers out of the county overrode the city tally and were enough to carry the measure statewide.