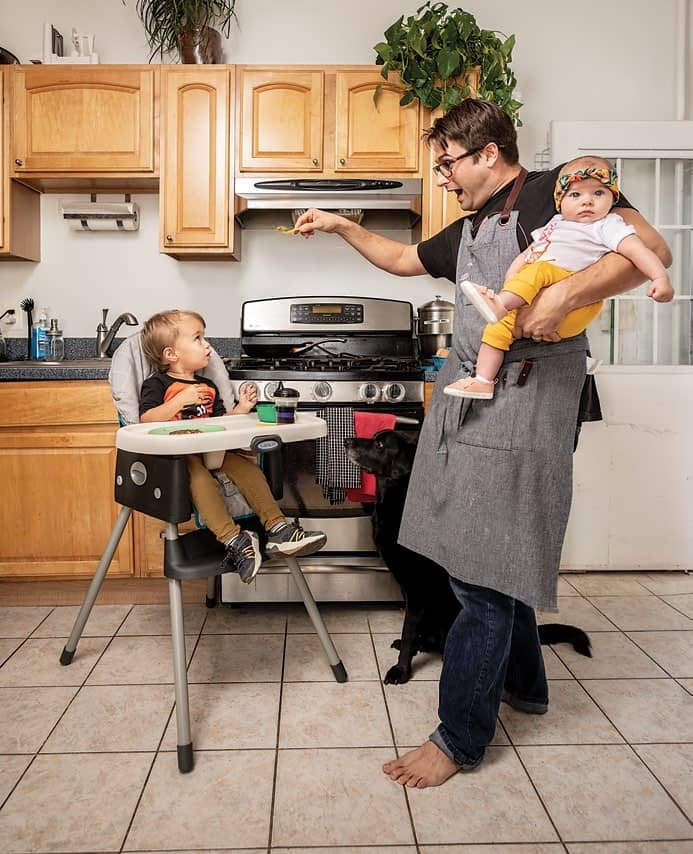 Stay-at-home dads are on the rise—— and redefining the role of fatherhood.

On an impossibly warm morning in late September, James Wolf has his hands full. Literally.

Sitting on an Orioles blanket at a Wyman Park playgroup, he bounces a toddler up and down on his left thigh, encouraging the familiar motions of “The Wheels on the Bus,” while his right arm rocks a stirring infant nestled inside her car seat. Somehow, and without upsetting the rhythm of either child, a cell phone emerges from his back pocket, which he deftly uses to capture a video to send to his wife. In between songs, he greets wandering toddlers by name and chats with the other 20 or so parents and caregivers—all of whom are women.

Sixteen miles north at GBMC Hunt Valley, his wife, Dr. Kate Diehn, settles into her first full week back to work as a primary-care physician after the birth of their daughter, June, earlier in the summer. By the time she returns home in the evening, she’ll have cared for upward of 16 patients while her family spent their day visiting playgroups, running errands, taking long walks, and keeping the house in order.

Wolf and Diehn are part of a growing trend of couples who are bucking the antiquated gender norms that once kept women out of the boardroom and men out of the nursery. According to the Pew Research Center, 17 percent of all stay-at-home parents in 2016 were fathers—that’s a 10 percent rise since the data was first reliably gathered in 1989.

Wolf had very little hesitation about leaving his career as an environmental remediation senior project manager. His job was rewarding, he liked the work, and he has a master’s degree from Johns Hopkins in environmental science to boot, but the opportunity to stay home with his kids was an easy choice, especially given his wife’s higher earning potential.

“When our son, Henry, was born, we kicked around the idea of leaving my job, and the utility of having one of us at home was what tipped the scales,” says Wolf. “It pays off in so many dividends—the continuous exposure to the kids means there’s no disconnect. I know what they’ve learned and done all day and can relay that to my wife.”

But it doesn’t come without sacrifice.

Wolf cites the main stressors of being an at-home parent: the beating his body takes from holding and chasing around two small kids, the pressure on his wife to be the sole breadwinner, and the occasional feelings of isolation he has. Though the number of stay-at-home dads is certainly rising, it’s not always easy to break into a mom group.

“Moms connect quickly because they typically have the shared experience of being pregnant, going through birth, and breastfeeding,” says Wolf. “I can’t really chime in on those, so I sometimes have to wait on the sidelines until I can jump in to talk about things like diapers or which libraries and playgrounds to go to.”

WTMD music coordinator Sam Sessa also struggled with the isolation of parenting young children when he left his job as a Baltimore Sun reporter to stay home with his newborn son.