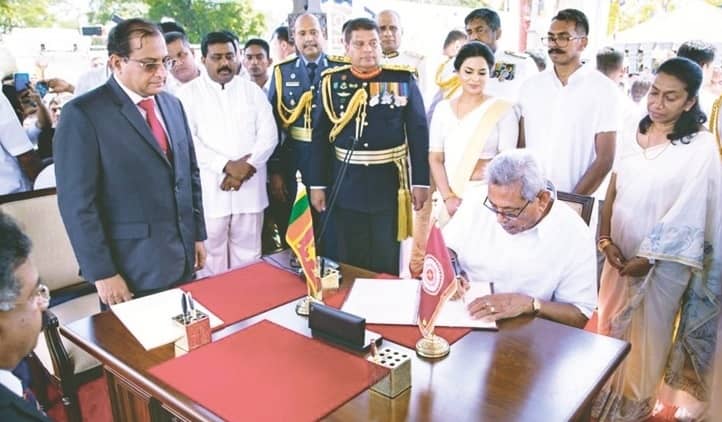 By keeping key ministries within the family President Gotabaya Rajapaksa may have ensured a tight grip over the administration, but challenges remain on other fronts By Col R Hariharan

WITH the swearing-in of Gotabaya Raja paksa, the Eelam war hero and controversial former defense secretary, as the president of Sri Lanka, the Rajapaksas are back in power at a critical time in the country.

Only five years back, the people of Sri Lanka had thwarted then-president Mahinda Rajapaksa’s bid for a third term in office. His authoritarian style coupled with allegations of corruption and misuse of office clouded his success in ending the Tamil Tigers’ separatist insurgency. However, the last five-year rule of President Maithripala Sirisena and prime minister Ranil Wickremesinghe fell far short of people’s expectations in delivering good governance which they had promised, with their endless squabbles virtually paralyzing government functioning in the island nation.

Perhaps the main reason why most of the Sinhalas voted for Gotabaya was the Easter Sunday massacre of 259 people by ISIS-inspired and home-grown Jihadi terrorists last April. It created a huge scare among the people who are yet to fully recover from the after-effects of fighting Tamil separatist insurgency for nearly three decades. The terrorist attack created a ripple effect. It exposed huge gaps in the national security fabric People were shocked to learn that the government failed to act upon receiving information on the impending terrorist attack, two weeks in advance. Further inquiry into the attack revealed that both Sirisena and Wickremesinghe failed to nip jihadi terrorism in the bud when the first indications of Islamist extremist activity were brought to their attention.

Public opinion thus swung in favour of electing Gotabaya as he was seen as a strong man who will revamp the national security structure to make it more effective. Gotabaya’s winning chances further improved as the terrorist attack became a rallying call for conservative Buddhists to defend the land they consider the last bastion of Theravada Buddhism. In their previous tenure, the Rajapaksas had pampered Sinhala Buddhist nationalism and soft-pedaled on fringe elements spouting anti-Muslim hate rhetoric and attacking Muslims. Their votes were naturally his.

One of the first actions that Gota - baya—who completed two months in office on January 17, 2020—took was to instal his brother, Mahinda, as the interim prime minister even as he placed another brother, Chamal, as the minister of agriculture. The three brothers, between them, control the ministries of defense, public security, finance, economy and policy development, Buddha sasana and cultural and religious affairs, urban development, water supply and residential facilities.

President Gotabaya has acknowledged that the Sinhala majority vote “allowed me to win the presidency”. He will thus come under pressure from the Sin - hala majority to deliver upon his preelection promises. For that, he will need his party, the Sri Lanka Podujana Peramuna (SLPP) to win an absolute majority in the parliamentary polls to be held in March 2020.