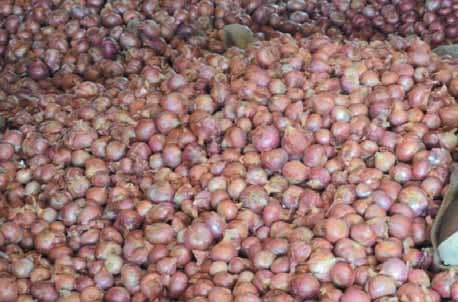 Short-term, consumer-centric measures have left the tomato, onion and potato farmers struggling to eke out a living.

The annual ritual of onions bringing tears to consumers played out yet again in September and early October. The price of the vegetable had at one time soared to Rs 45 per kg in Lasalgaon, Asia's largest wholesale market near Nashik in Maharashtra. Retail prices of the onion had shot up and were ruling at over Rs 80 per kg in many parts of the country.

A worried Central government soon swung into action to arrest the spiralling prices of the politically-sensitive crop. In mid-September, the government levied a minimum export price (MEP) of $850 per tonne. The MEP is a stock weapon in the government's armoury used to discourage exports. With this levy, no exporter can ship a product below the MEP, which makes the product costly in the export market and hence unviable to export.

The MEP measure was soon followed by a total ban on export of onions, a crop that has brought several governments down in the past. Besides, stock limits were also imposed within the country, limiting stocking of the vegetable to 50 tonnes for wholesalers and 10 tonnes for retailers.

Onion in India has two crop cycles. The Kharif onion is a Monsoon crop sown at the beginning of the summer rain between May and June and harvested between September and December. The Rabi crop, on the other hand, is a winter crop sown in October and November and harvested during April and May. Erratic rain in the Kharif season played havoc and led to prices of the vegetable soaring high this time.

First of all, a three-week delay in the South-West Monsoon rain complicated the matter. This delay in rain hampered sowing and replanting of onion saplings, leading to a delay in fresh crop arriving in the markets. This was followed by heavy rain in onion growing States, such as Maharashtra, Karnataka and Andhra Pradesh, among others. The downpour disrupted the supply chain and yet again prevented onions from reaching the markets on time. The severe shortage of the crop, along with some hoarding by stockists, led to onion prices hitting sky high.

While consumers shed tears, onion farmers were no better off. Most of the small farmers had already sold off their crops to big traders for a meagre amount even before the prices had begun to head north. It was the middlemen, like sotckists and big traders, who made a killing again as onion prices heated up.

The government's tough measures, like export ban and stock limits, have brought the prices of onion down considerably. Consumers, hit hard by rising food prices, may be able to heave a sigh of relief for now. However, few would now be interested in the plight of the farmers.

In fact, imposition of stock limits has affected demand at the mandis (regulated wholesale markets). Farmers are unable to sell their fresh produce in adequate quantity, thanks to the stock limits. As a result, onion growers are left with their fresh crop, which is deteriorating in quality as days pass by. Moreover, the ban on exports makes it all the more difficult for farmers to dispose of their crop, causing them further losses.

This sorry state of affairs is not limited to onion farmers alone. The same plight affects growers of tomato, onion and potato (TOP), who have been the hardest hit in recent times compared with farmers who cultivate wheat, rice and sugarcane. It is indeed a sad irony that the TOP farmers in India - the world's second-largest producer of these three crops after China - are left to suffer both in the situation of a bumper produce as well as in the event of a crop failure. "Our efforts have always been on how to pull down the prices of food, and this has been bad for farmers. Farmers get 14 per cent less income due to restrictive policies," notes Ashok Gulati, a noted agriculture economist and former chairman of the Commission for Agricultural Costs and Prices (CACP).

Incidentally, the crisis of the TOP crops is not a one-off or a rare occurrence. According to a recent report by SBI Research, Ecowrap, rise in vegetable prices is mainly restricted to increase in tomato, potato and onion rates. The report also notes that this inflation in the three crops has been occurring with almost alarming regularity.