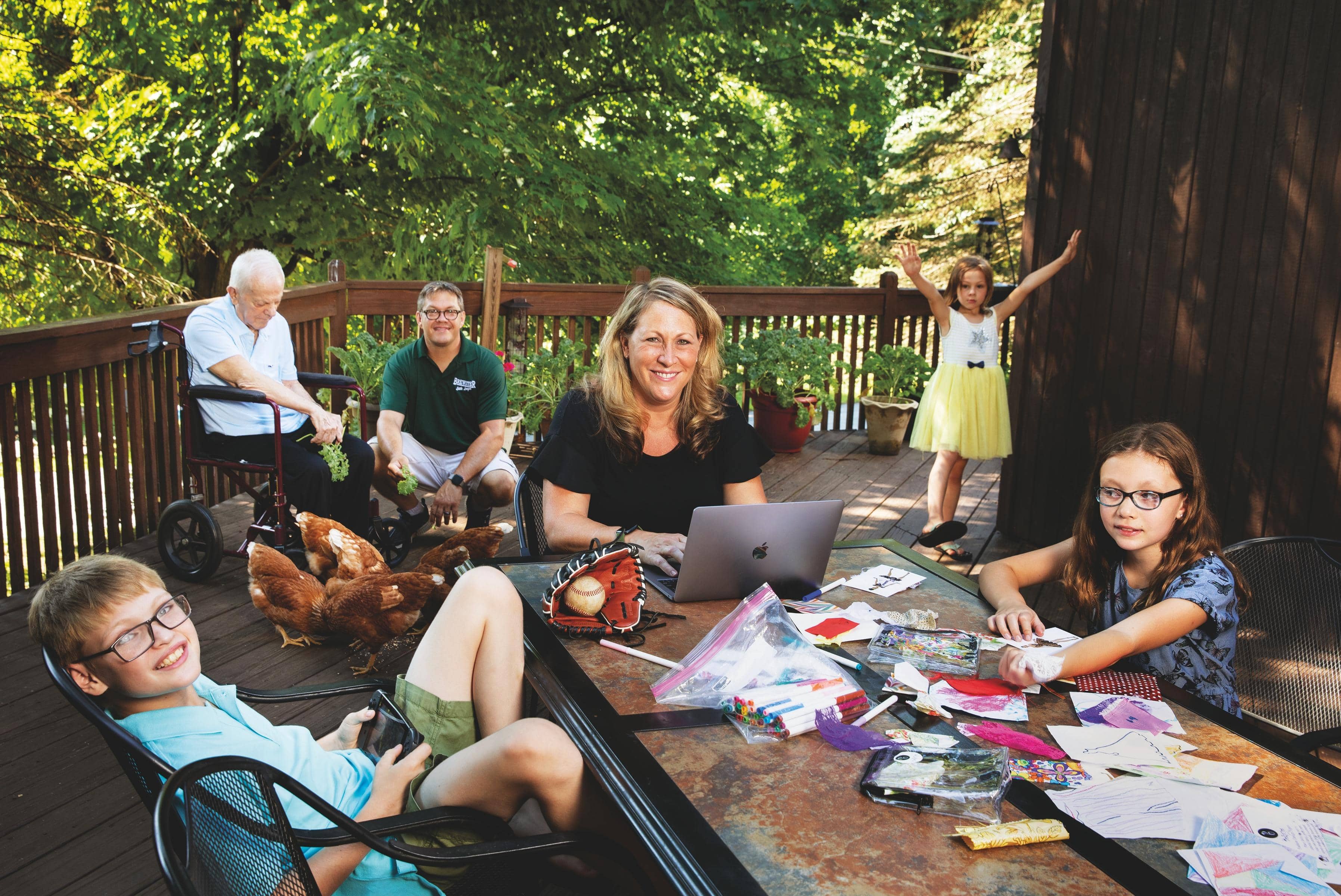 The sandwich generation has it tough in the best of times. The pandemic has made it even tougher.

THINGS WERE HARD ENOUGH FOR Jennifer Galluzzo before the pandemic hit. Four years ago, the full-time working mother of three became a fullfledged member of the “sandwich generation” when her father-in-law joined their household in Brewster, N.Y. But things got harder in March, when schooling for her three children, ages 5, 8 and 10, abruptly went online in response to the spread of the coronavirus. Galluzzo, a digital marketer, and her husband, David, a lawyer, started working from home. Her child care disappeared, as did her cleaning help.

Her father-in-law, who has Parkinson’s and dementia and is used to spending most days quietly at home with his caregiver, was increasingly agitated by the full house. “He doesn’t like loud noises, and we were all here 24/7,” says Galluzzo, 46. “I had Zoom calls. My husband had Zoom calls. Someone needed to make sure the kids got their work done. I had a schedule that didn’t work very well— it was more about who needed what fire to be put out at that moment.”

Sandwich generation caregivers are typically in their thirties, forties or fifties, taking care of younger children and parents at the same time. But the definition can be far broader: About 11 million people nationwide are multigenerational caregivers, helping fullor part-time with children and parents, grandchildren and grandparents, siblings with special needs, even extended family, friends and neighbors. And during the COVID-19 crisis, the usual stresses of multigenerational caregiving have been exacerbated.

Galluzzo had thought her fatherin-law’s stay at their house would be temporary, lasting only until they could figure out their next steps. That is typical—and usually wrong, says Chris Cooper, a certified financial planner in California who often consults on the needs of the elderly and disabled.

Families “start out thinking they’ll take care of Mom for a year or two,” says Cooper, “and 10 years later they are still together.” Such situations can lead to divorces, family estrangement and financial devastation, he says. That’s why he suggests that before you make a major decision about selling a house or moving in together, you should discuss your options with a third party, such as a social worker, a minister or a financial planner—or all three.

A 2019 report by the National Alliance for Caregiving and Caring Across Generations produced some sobering statistics: Sandwich caregivers spend an average of 22 hours a week—the equivalent of a part-time job—providing help while often simultaneously juggling work. One-third report emotional distress, and one in five say they have a high level of financial strain.

Cheryl Albright, 40, of Bradenton, Fla., found herself suddenly responsible for making long-distance care arrangements for her ailing father and a brother with severe autism. After her father became seriously ill, she spent nearly six months going back and forth between New York and Florida. Albright, who runs her own business as an occupational therapist, thought she would have her father live with her and her husband, “but he needed 24-hour supervision,” she says. Eventually, she found respite care for her father, and she was able to move her brother from his group home in New York to one near her, just as the pandemic was starting to peak.

None of it was easy. She had to sell her father’s house and take care of a multitude of tasks. “There are a lot of things you don’t think about, such as how to turn off the cable if you’re not listed on the account,” she says.

Her work was complicated because her father never talked about his financial or estate plan—his power of attorney, health care proxy, advance directive and other documents. “He had all of his legal ducks in a row, but when the hospital social worker asked for his health care proxy, I didn’t know who he had chosen or where the document was,” she says.

A survey by Haven Life Insurance found that 59% of sandwich generation caregivers expect to support their parents or in-laws financially as they age. And according to T. Rowe Price’s 2019 Parents, Kids & Money Survey, nearly one-third of dual caregivers spend $3,000 a month or more to care for an aging parent or relative. Nearly three-fourths say they do not receive any kind of support from social services or any financial aid.