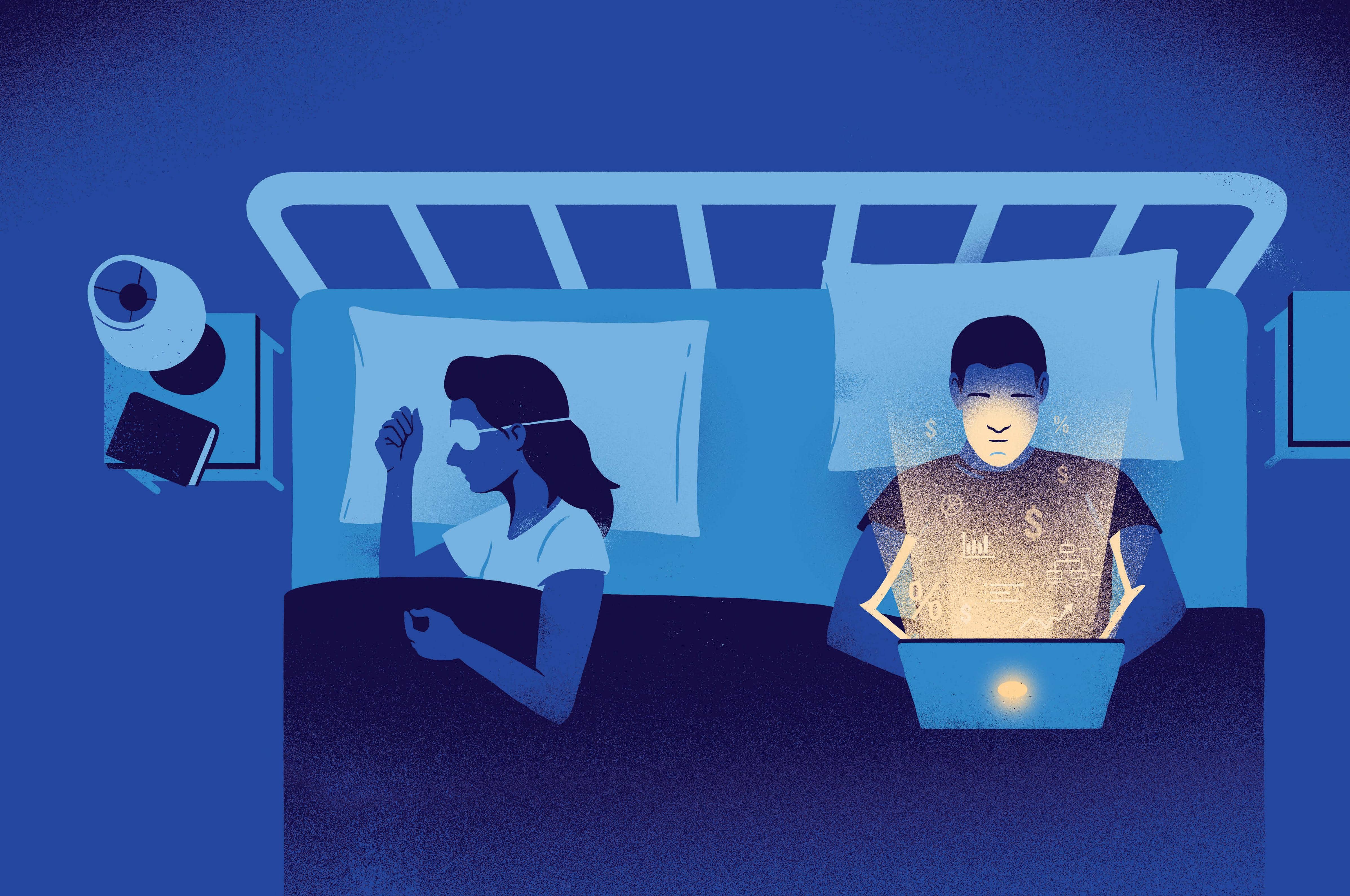 You’ve got problems. We’ve got solutions. Use our guide to keep your portfolio from keeping you awake, no matter what the market does.

“If it ain’t broke, don’t fix it” is a mantra that worked surprisingly well for investors for a very long time. After all, we headed into 2020 with a long, robust bull market and a humming economy. Then things got fractured. COVID-19 got much more serious, much more quickly, than many people expected. Stocks plummeted, and the market damage extended to bonds, too. // By late summer, the markets had completely recovered—but for many investors, the scars remained. And then, stocks started to wobble again. The 2020 turmoil has served as a wake-up call that a complacent investor is a vulnerable one. After all, uncertainties still abound, for stocks in particular. After a nearly straight-up trajectory since spring, more of a pause may be in store. Some market watchers worry about the vulnerability of the handful of tech stocks that have done most of the heavy lifting; other experts warn that the market has developed a worrisome speculative character. And of course, the coronavirus continues to take its toll.

With that in mind, we looked at some of the portfolio challenges that investors have grappled with in this tumultuous market. If you have any of the portfolio problems below, now is the time to fix them. Prices, returns, and other data, unless otherwise noted, areas of September 11.

You Took on More Risk Than You Could Handle

Many investors say they can stomach a 20% decline or more in their portfolio. But when it becomes reality, as it did in February and March, some realize they don’t have the risk tolerance they thought they did. The decline in the markets was sharp and shocking—the S&P 500 fell nearly 35% from February 19 to March 23.

The velocity of the decline was unusual, and so was the speed of the rebound. But it’s worth remembering that since 1929, there have been 14 bear markets, defined as a loss of at least 20% from a market peak, with an average decline of 39.4%, according to S&P Dow Jones Indices. “We’re overconfident about our ability to tolerate risk,” says William Bernstein, a neurologist who wrote a book called The Intelligent Asset Allocator. “It’s one thing to say to yourself, ‘I can tolerate a 40% or 50% fall in stocks, as long as it’s temporary.’ It’s another thing to tolerate what’s actually happening.”

Ajay Kaisth, a certified financial planner in Princeton Junction, N.J., had a client who gave into her fears at exactly the wrong time. The 74year-old went into the spring downturn with a relatively conservative portfolio—70% bonds and 30% stocks— and a separate emergency account with two years’ worth of living expenses. But after watching markets fall for four weeks, she insisted on selling all $733,800 of her stocks and bonds on March 23—the day the market bottomed.

Kaisth’s client illustrates the difference between risk capacity and risk tolerance. She had the ability to take on risk and absorb losses in her conservative portfolio, and to wait for a market rebound. But she lacked the psychological fortitude.

Risk capacity is a product of your time horizon and what, exactly, you need to pay for. Still, have children to put through college? You can’t let four years of tuition payments get clipped by volatile markets when your kids are in high school. Ready for retirement in a couple of years? If your portfolio is just big enough to give you the golden years income you desire, a hit to the principal with little time to make up the losses can keep you working longer than you expected.

Even if your goals are comfortably assured, you may be the kind of investor who feels the sharp claws of a bear market more intensely. In that case, you might need to de-risk your portfolio along the lines of a Wisconsin couple, clients of CFP Brian Behl. The couple, in their early fifties, works in government, so they expect their public sector pensions and Social Security to cover their retirement needs. Their investment portfolio of $400,000— until recently invested 70% in stocks and 30% in bonds—is extra.

“They are people who track their finances, but they told me they stopped looking at their account because they didn’t want to know how much it was down,” says Behl. In July, the couple decided to scale back the stock portion of their portfolio to 50%, from 70%. In the bond portfolio, Behl selected shorter-term bonds, which are less likely to see sharp price moves if interest rates rise again. A fund we like is VANGUARD SHORT-TERM BOND ETF (SYMBOL BSV, $83), an exchange-traded fund that holds investment-grade government, corporate and international bonds, or its mutual fund equivalent, VBIRX.

Other de-risking moves might include focusing on high-quality, dividend-paying stocks with bulletproof balance sheets—or tilting toward so-called defensive sectors, including health care, consumer staples and utilities, and away from industrials, materials, energy firms, and companies that provide nonessential consumer goods or services.

You Tried to Time the Market

The evidence is clear that staying invested is better than pulling out and piling in based on what you think a mercurial “Mr. Market” will do next. It’s hard to beat a buy-and-hold approach over time. The worst return for an all-stock portfolio in a single calendar year, going back to 1950, was a loss of 39% (in 2008), according to J.P. Morgan Asset Management. The worst five-year return was a loss of just 3% annualized. The worst 20-year return was an annualized gain of 6%.

To further illustrate the perils of market timing, strategists at BofA Securities looked at the performance of the S&P 500 going all the way back to the 1930s. Since then, a long-lived investor sitting out the 10 highest return days per decade would have earned an unimpressive 17% through late August of this year, compared with a return of more than 16,000% for someone who stayed in the market. (For a decade-by-decade look at the cost of market timing, see the table on page 24.)

Jeffrey Bernfeld, a CFP in Towson, Md., has clients who made an amazing call on the markets in February. The husband works in international sales, and he had business contacts outside of the U.S. who were warning him that the coronavirus was a lot worse than most Americans realized. So, in February, the couple sold all of their stocks and bonds in a retirement account worth nearly $1 million. “When they sold out, I was skeptical, of course,” he says. “By March, I thought, ‘Oh, my God, this guy’s a genius.’ ”

Bernfeld then urged the clients, who had avoided what would have been a loss of more than 20%, to consider getting back in the market at the new, lower levels. Nervous that the worst wasn’t over, the couple declined, even after the market began to turn. At the end of July, they were still 100% in cash—and behind where they would have been if they’d never sold a thing. “With market timing, you have to get two things right: when to get out, and also when they get back in,” Bernfeld says. “Getting one decision right, as they did, is very difficult. Getting two decisions right is almost impossible.”

Getting back into the market can be easier when you don’t do it all at once. In May, a couple who had sold an entire $750,000 portfolio in the coronavirus panic and wanted help getting back in the market came to Jonathan McAlister, a CFP at Kimery Wealth Management, in Memphis, Tenn. On McAlister’s advice, they put 50% of their money back in immediately, and they’re investing the rest every month by dollar-cost averaging—putting a fixed amount into the market at regular intervals. Dollar-cost averaging ensures that you’ll buy more stock when it’s cheap and less when it’s expensive, lowering your average cost per share. And it takes the emotion out of the investment decision.