Women step out of the shadows on Kumba exploration project 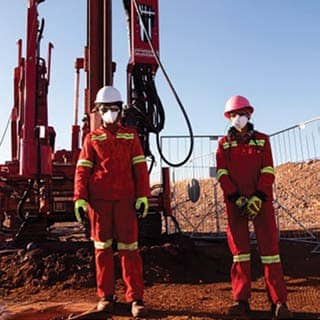 Kumba Iron Ore is drilling at two new sites in a bid to extend the lives of two of its largest assets in the Northern Cape. And there’s an all-women drilling crew on board.

In early 2018, JSE-listed Kumba Iron Ore said it was considering a ‘step-out’ strategy, having in the previous year restructured its Sishen mine in the Northern Cape – a move that cut the operation’s life to 13 years from 17 years previously.

The strategy was about exploring for new resources and included possible acquisitions that Themba Mkhwanazi, CEO of Kumba, said at the time would be opportunistic. That strategy is now bearing some fruit following the announcement in July of its R7bn Kapstevel project – an exploration project that will extend the life of Kolomela, another of Kumba’s mines.

The company also disclosed it was drilling on two other projects – Ploegfontein and Heuningkrans in the Northern Cape. These are recent property acquisitions that, if developed, will help Kumba take the average life of its Sishen and Kolomela mines from their current 13 years to 20 – an effort that will absorb R200m in exploration budget annually.