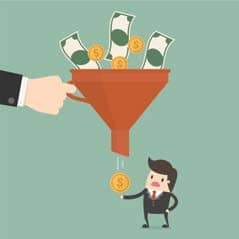 Historically, wars, revolutions and pandemics have reduced inequality, but new research suggests that Covid-19 is unlikely to be a leveller for South Africa’s deeply unequal society.

South Africa is one of the most unequal countries on earth. Statistics like the Gini coefficient only confirm what any tourist sees on arrival: Large disparities in living standards between those in the swanky suburbs of Sandton or Stellenbosch and those living precariously on the outskirts. Add to that the poverty of a third of South Africans still residing in former homelands, far away from most tourist eyes.

How to narrow this gap has been at the center of debate for the last 25 years. But there has been little progress. While the nature of income inequality has changed – inequality between black and white has declined while inequality within each group has increased – the overall level of inequality has remained largely constant.

Economists have typically identified two things that should help: economic growth and redistribution. But SA is stuck. A decade of paltry economic growth has precluded the first of these options. And redistribution has its limits too. We often forget that because of our progressive tax system and well-targeted social grants system, we have one of the most redistributive budgets in the world. Yet, with a budget teetering on the brink of insolvency, there is little scope to further take from the rich to give to the poor.

There are, of course, other options. Historian Walter Scheidel argues in his excellent book, The Great Leveller, that only three things have ever substantially reduced inequality: wars, revolutions, and pandemics. “Just as with mass mobilization wars and transformative revolutions,” he writes, “equalization was accompanied by great human misery and devastation, and the same applies to the most catastrophic epidemics.” He notes that “this is, without any doubt, an exceedingly bleak conclusion”.