Looking to Follow the Fed? Here's How to Find Key Data for That 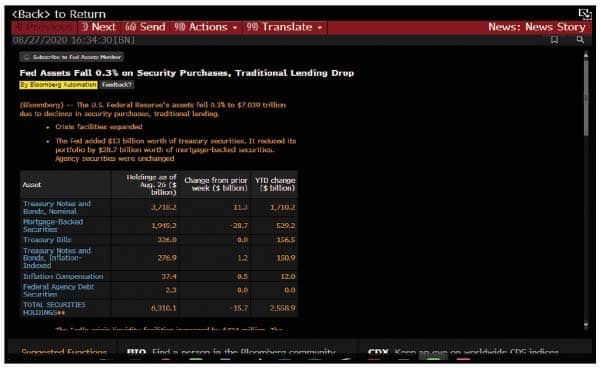 CHAIR JEROME POWELL has repeatedly said the Federal Reserve is committed to using its full range of tools to support economic activity.

Rates are near zero and projected to stay there through at least 2023. Since mid-March the central bank has almost doubled its balance sheet. With much of the equity market’s performance attributed to its actions, market participants are watching the bank as closely as ever.

Here are some tools you can use to stay on top of the Fed. First, for a news story providing a breakdown of its balance sheet— its securities holdings, crisis liquidity facilities, and traditional lending facilities—run {NI FEDASST } and click on the most recent headline (FIG. 1). These stories, which display the change from the previous week and year to date, are produced with the assistance of Bloomberg Automation. They’re published weekly as soon as the Fed updates its H.4.1 statistical release with its balance-sheet data. To be notified when a new story appears, click on the gray Subscribe to Fed Assets Monitor button.

All the data the story covers have been tickerized. Run {FARWMCCF GP }, for example, to graph the Fed’s holdings of corporate bonds, exchange-traded funds, and other securities in its Corporate Credit Facility LLC. As you can see, the balance ramped up steeply in May (which reflects an almost $32 billion slug of nonmarketable Treasuries from the Treasury Department’s backstop that was included in the facility’s reports as of May 22). After rising in June and July, though, the facility’s holdings appeared to be leveling off in August (FIG. 2). Will the Fed taper new purchases to zero if the market remains stable?