An Introduction To Small-Scale CNC 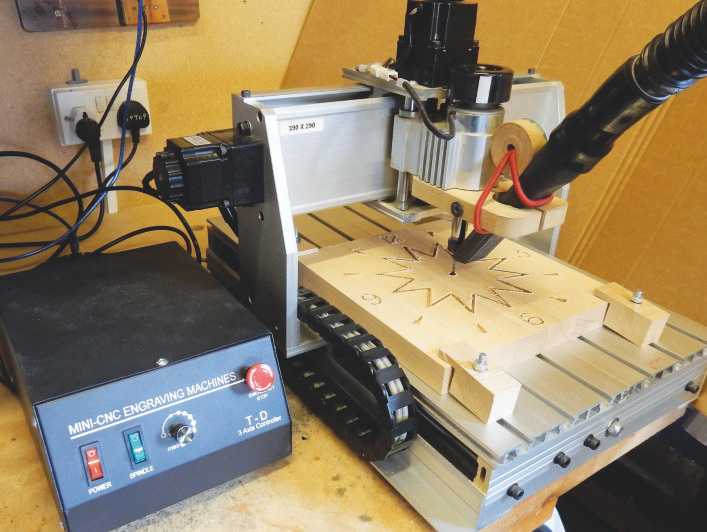 As a hobby woodworker for much of my life I have had three main problems: first is time (or lack of it); second is the cost of decent tools and machinery; and third is the ever tempting array of ideas for new projects generated by magazines such as this one. I have largely solved the first problem by retiring, the second problem by spending wisely, and, where possible, careful second-hand purchases. The third problem I hope will never be resolved as I enjoy new challenges.

It was a magazine that first exposed me to the idea of building clocks with wooden gears, and further research online provided free printable plans for cutting gears using a scroll saw. Now I am sure there are plenty of people out there who can make a very respectable job of using a scrollsaw, but unfortunately this does not include me and after many failed attempts at making something that looked like a gearwheel and would actually work, I came close to giving up the idea altogether. Then, by chance, I came across a YouTube video of gear cutting using a small CNC machine.

After much research and reading reviews, I decided to order a small screw-driven (as opposed to timing belt driven) Chinese CNC machine from eBay (photo 1). These are a lot cheaper (currently around £430) than UK produced machines, but there is a price to be paid in that there is no effective support from the seller and not a single word of instructions. However, there are plenty of user support groups and spare parts are readily available if needed. After some initial frustrations in setting up the software, the machine has proven to be quite robust and after two years’ use has not let me down.

Repeatable accuracy Accuracy and repeatability are two benefits of CNC. I have just built a large (3ft diameter) springdriven kinetic sculpture called ‘Aurora’ (photo 2), which required 20 identical arms with mounting holes to be cut from birch plywood (photo 3). While this could be done using a scrollsaw, bandsaw, or even fretsaw, it would require a huge effort (and skill) to keep them exactly the same (photo 4). In photo 3 you can also see a sacrificial board is positioned under the component being cut out. To stop the component moving and being ruined, small ‘tabs’ are left to hold it steady and these need to be cut and sanded off later. Another benefit of a sacrificial board is that material can be screwed down to it.

Photo 5 shows the components involved in the ‘Aurora’ mechanism: on the ruler are the tiny magnets that actuate the pawls controlling the release of the spring energy. The holes for the magnets in the pawls require very accurate alignment and CNC excels at this. ‘Aurora’ is just one of many designs available online from Christopher Blasius, who is based in Germany, and you can see his designs in action at www. Holzmechanik.de or on YouTube by searching for ‘Holzmechanik’. I have also built several versions of his ‘Magica’ clock (photo 6).

Software CNC stands for Computer Numeric Control and refers to any software-controlled machine. There are three stages to CNC: first a computer generated drawing of the object is needed and this is done using a CAD (Computer Aided Design) package. There are many free and paid for CAD programmes – you can even use things like Windows ‘Paint’ to produce simple drawings.

Secondly this drawing needs to be converted into a format that a machine can understand and this requires a CAM (Computer Aided Machining) package. There are both free and paid-for packages available and I chose to use a paid-for combined CAD/CAM software package called Cut2D, produced by British company Vectric. The user support is beyond excellent with lots of video tutorials, free projects to download, and regular updates. I had a minor problem with an item I was designing and contacted the help desk. Within the hour I had a full solution in the form of a short screen video taking me through what was in fact my own error – the voiceover used my name so it was a very personal response.

Cut2D, like the name suggests, is aimed at producing two-dimensional objects, but as it controls the depth of cut as well as the horizontal dimensions, it is often referred to as ‘2 and a half D’. True three-dimensionally curved objects are a different ballgame but there are packages which allow you to do this, such as Cut3D and V Carve, made by the same company. All Vectric software allows you to preview what the final object will look like from all angles and warns against cutting right through the material being machined and potentially damaging the bed of the machine. If this is the case, you can fix a sacrificial board underneath.