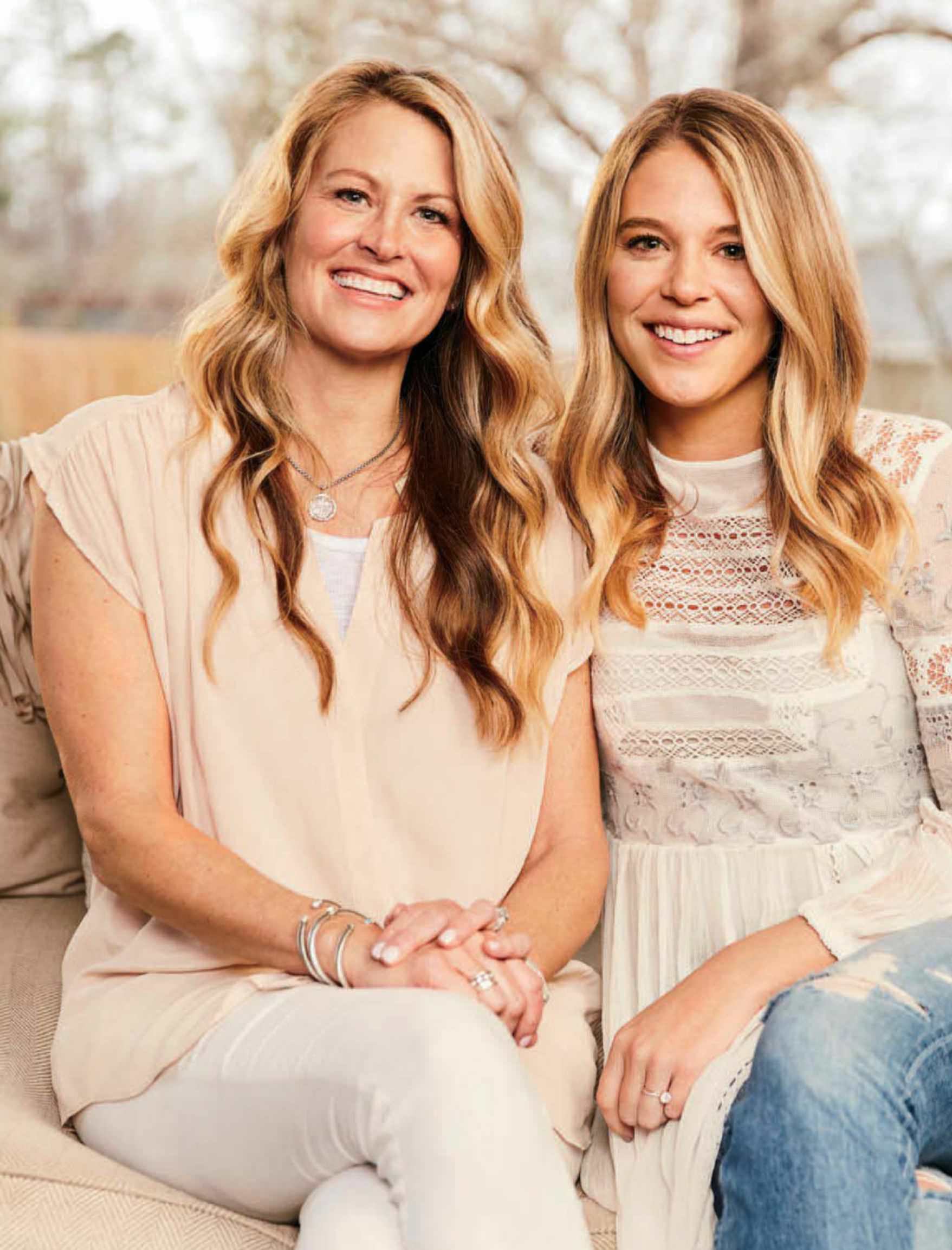 Heartfelt tributes to the women we’re celebrating on may 13.

I was born to be a mom.¶ However, over the past year and a half, I have learned so much about motherhood that I was not prepared to face: from the lack of showers to the complete exhaustion to the sacrifice of almost any social life to the question of “Whose body am I in?!” to the amazing discovery of how deeply I can love someone I just met.¶ Becoming a mother can look different too. My grandmother became a mother by adopting my mom. My mom became a mother by having me, my sister, and my brother biologically. I became a mother through adopting my first daughter, Willa Gray, and then giving birth to my second baby girl, Ada James, three months later. Both of my “birth” stories were very emotional and extremely difficult and turned into the most amazing love stories.

When I dreamed of becoming a mom, I had only a daughter’s point of view. After watching my mom “mother” us (having the happiest childhood imaginable), I thought I pretty much had the “mom thing” figured out. Yeah, right. I appreciate my mom in a whole new way now that I have experienced firsthand the crazy sacrifice she made for us. But more than a sacrifice, it’s an unmatched, indescribable gift. 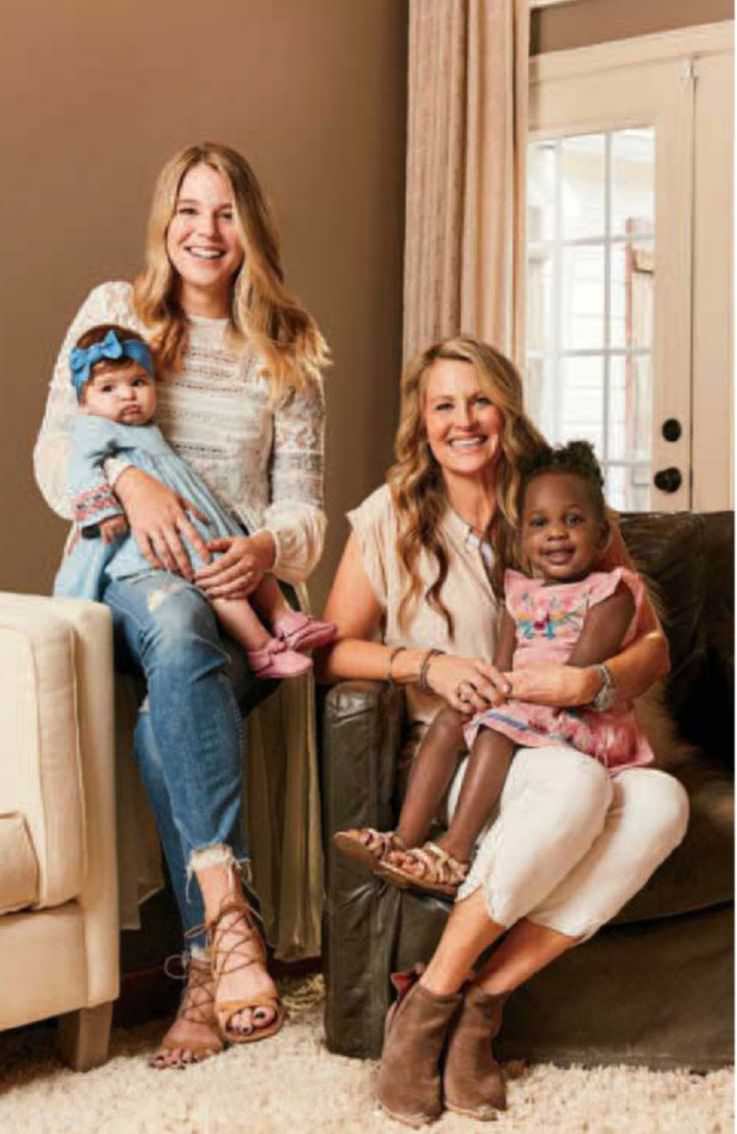 No other accomplishment in my life is even comparable to being a mom. Nothing in the world could be more rewarding. Motherhood has topped it all. I may not remember the last time I washed my hair. I may have slept just five hours last night. My social circle may now consist of only a 2-year-old and a 4-month-old. (Do my dogs count?) I may never squeeze back into my skinny jeans again—if I do, I definitely won’t look the same. But my goodness, if I was put on this earth for anything, it’s to be a mom. And it’s worth it all.

The giggles, the cuddles, the kisses, the playtime, and each “I love you, Mama” moment make every single “sacrifice” not really a sacrifice but instead a privilege. It’s a sweet blessing to be the mother of two of the most amazing little girls God has ever created. And to just think He gave them to me. Could a mother be luckier? I don’t think so. And as for all of the moms (including myself) whose days are not always rainbows and butterflies, that’s when a whole lot of Jesus and a little bit of wine go a long way.

Becoming a mom has rocked my world. But my girls have become my world, and it couldn’t be any sweeter.

LAUREN AKINS is a devoted mother, wife, and philanthropist. She currently lives in Nashville with her husband, country music star Thomas Rhett, and their two little girls, Willa Gray and Ada James.

When my mother, Virginia Marshall Smith—nicknamed “Gig,” died in 1988, one old man stood up at the funeral and said that he’d “gone to school with Miss Gig,” and announced that she was “a real nice lady—for a foreigner.” My Northern husband elbowed me furiously. Foreigner? What did he mean? Hadn’t my mother lived here in the very same house and taught in these public schools for over 60 years, ever since she’d eloped with my daddy, Ernest Smith, and moved all the way across Virginia from her Chincoteague Island home to these rugged mountains where he had been born? Foreigner? “It means that she’s not from around here,” I whispered. “That’s all.”

I was not a foreigner. Though my mother was always trying to turn me into a lady, I was my daddy’s girl, a natural tomboy, running those mountains with the neighborhood kids all day long until they called us home for supper. “Wild animals!” my mother despaired.

Every summer, she sent me to visit my Aunt Gay Gay in Birmingham for two weeks of lady lessons. Here I’d learn to wear white gloves, sit up straight, walk in little Cuban heels, and use proper table manners, all to be tested at fancy lunches at The Club on top of Red Mountain. Aunt Gay Gay explained the rules: “A lady does not point. A lady eats before the party. A lady never lets a silence fall. A lady always wears clean underwear just in case she might be in a wreck. A lady does not sit like that.”

After several summers of this, during which I really wanted to climb to see the Vulcan statue instead of eating lunch at The Club, my aunt threw up her hands and declared that she could not do another thing with me! I’d had a bad attitude about ladies from the beginning because I was a big reader. All the ladies I’d encountered in fairy tales and history books—especially the ladies-in-waiting—just stood around in terrible hairdos and great big skirts waiting to be the queen, after which they were often beheaded. No, I wanted to be an active heroine instead, like Nancy Drew or Heidi or Pippi Longstocking or Anne of Green Gables or Pocahontas or, most of all, Scout. 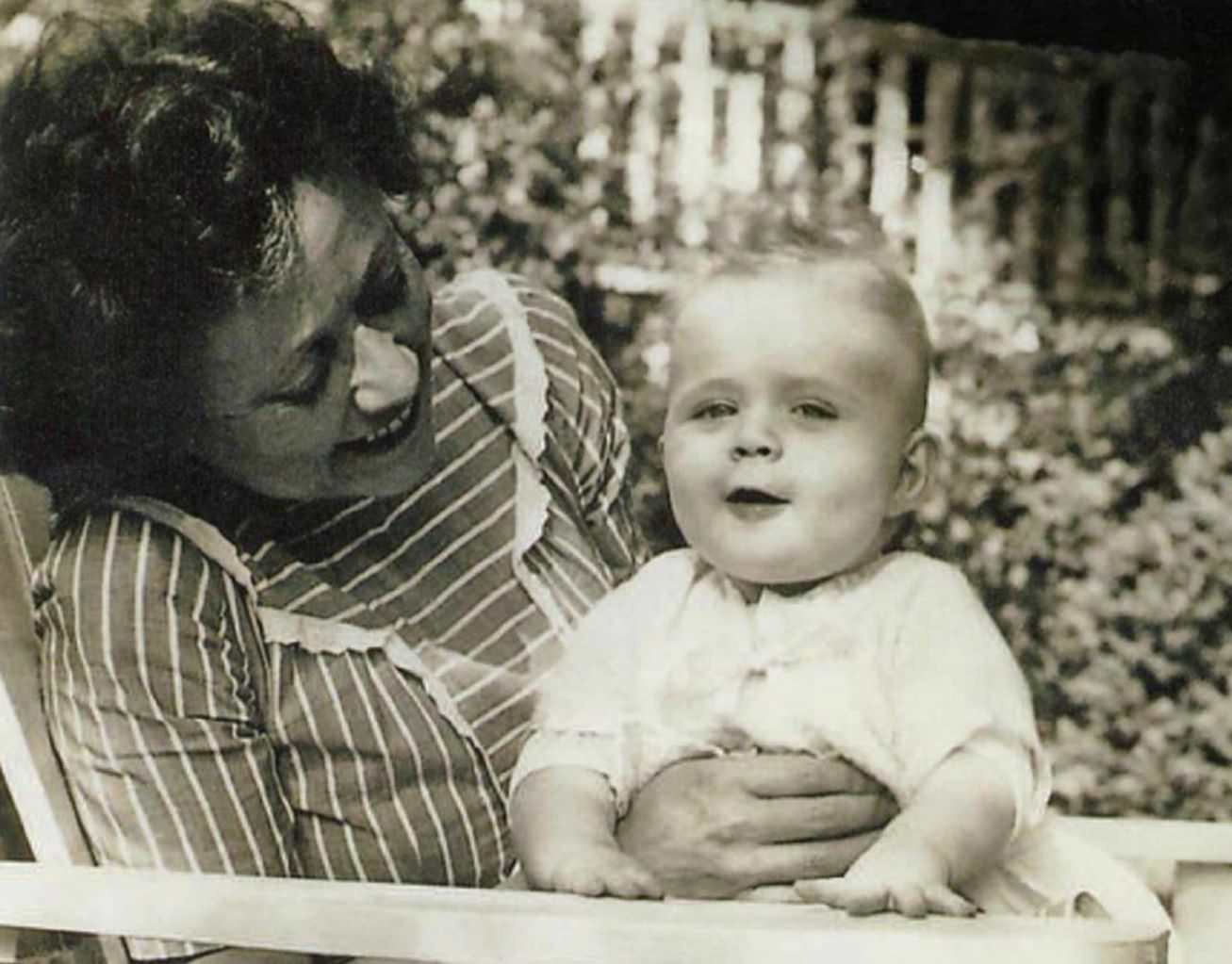 So after flunking the lady lessons, I entered a period of teenage rebellion in which I quit 4-H and chose to take up blue jeans; Elvis; and boys who rode motorcycles, put cigarettes in their rolled-up T-shirt sleeves, and were always on the absentee hot list. Wisely, Mama kept her own counsel on all this and was invariably kind to my friends; our house was always open to all—it was the gathering place. Everybody adored my mother, not only because she was never judgmental but also because she was so much fun. She taught us all how to jitterbug. She was even the confidant of many of my friends, though she infuriated me by never telling me their secrets.

In Southern literature class, we talked a lot about the concept of the Southern lady—and her opposites—such as Zelda Fitzgerald and Scarlett O’Hara. I began to think about Mama in a new way. She’d been only 3 when her father killed himself, leaving a pile of debt and six children for my grandmother to raise alone on Chincoteague Island. Grandma Annie Marshall had turned their big old Victorian home into a boardinghouse, and it was there in the kitchen that my mother first learned how to cook, flipping little cornmeal cakes and fish on the hot griddle for breakfast. Later, she would walk miles across the ice in winter to get to college on the mainland, where she earned her teaching degree in home economics.

So Mama had not been a “born lady,” yet she was a born lady anyhow— or a “lady born” in the old picturesque parlance of the mountains. She embodied all of the attributes: her kindness innate, her warm eyes and good humor never varying, her patience endless, bearing her misfortunes with grace and even style, always respecting others and standing up for what she believed in. Somehow she knew how to walk into a room and make everybody feel at ease. She was gracious, gentle, community minded, and honest. A real lady. I wish I could tell her this right now, but I believe she knew it in her heart anyway, the way she knew everything.

LEE SMITH is the author of 13 novels and four collections of short stories. Her memoir, Dimestore: A Writer’s Life, is available from amazon.com. 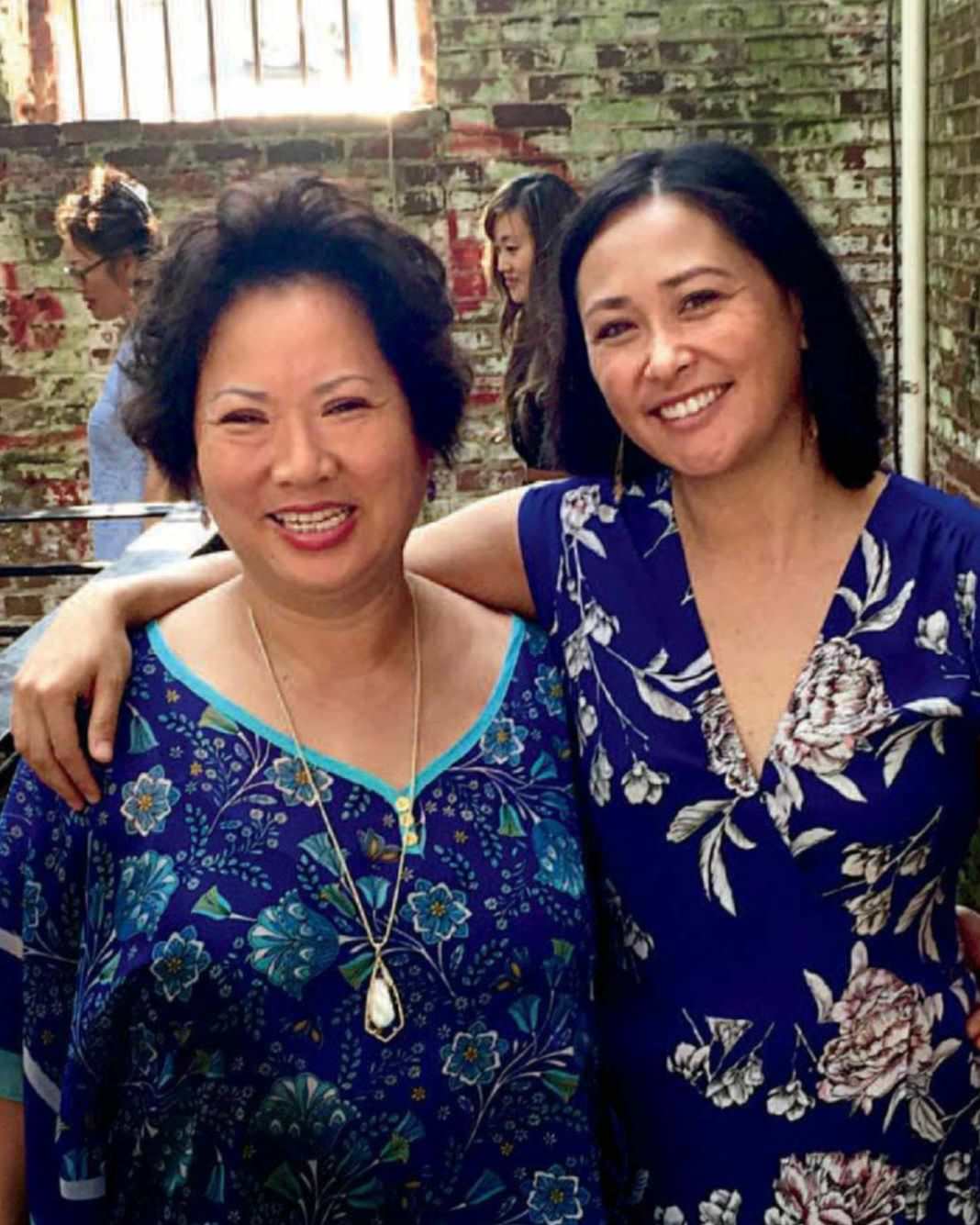 My mom cooks meals for 40 with a composure that most of us lack when cooking for four. She makes lunch for her congregation every Sunday. My mom and dad sponsor midshipmen from the United States Naval Academy; it’s a volunteer effort that has them regularly hosting big Korean feasts. Someone is always stopping by or staying over. There is always something to eat. Cooking like this requires so much stuff. There’s a Korean fridge, an American fridge, a garage fridge, and a freezer downstairs. The pantry is packed with everything from oats to seaweed; the garage is stocked with everything from mixing bowls to boxes of soda. I often tell my mother that she runs a free bed-andbreakfast. She smiles and says nothing.