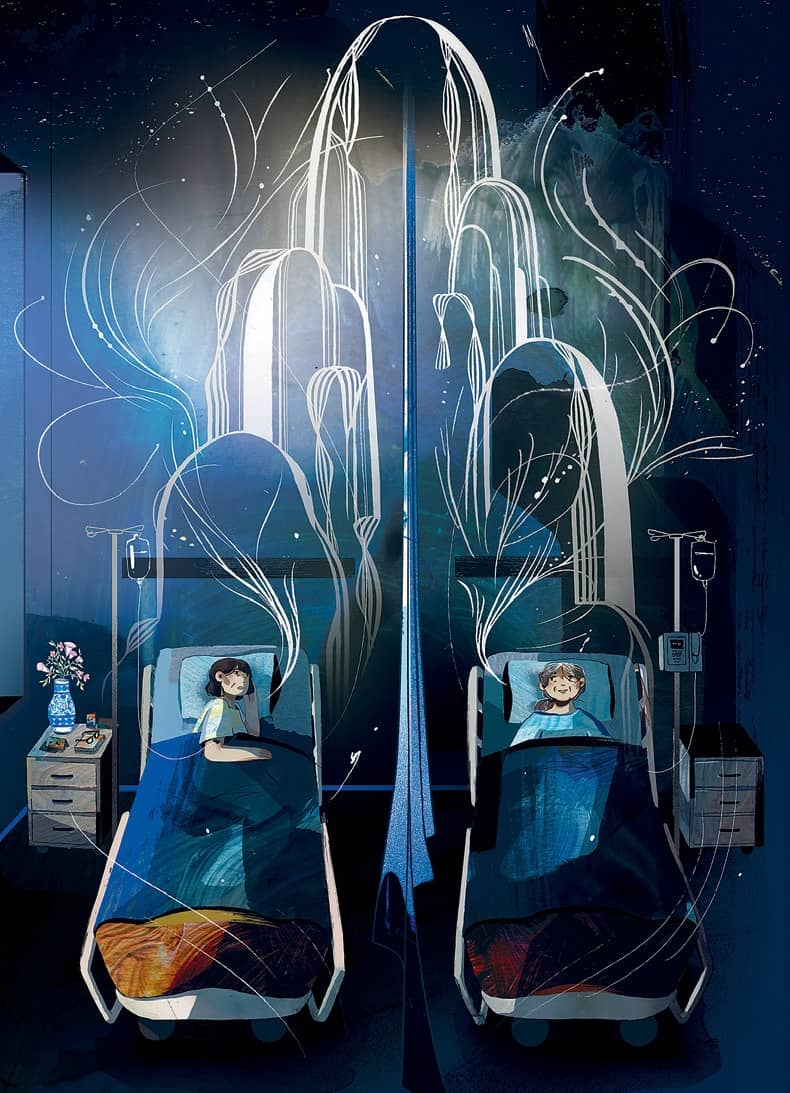 When Cathrin Bradbury landed in the hospital, it took sharing a room with an exceptional stranger to see the strength that can be found in vulnerability

Cathrin Bradbury
I’M SORRY to dampen your midsummer optimism with a downer. But if you are cusping 60 and beyond this June, your likelihood of being admitted to the hospital just got a whole lot higher. In my set alone, we shambled into 2019 with rotator cuffsurgery, a hip replacement, complicated bone breaks, open-heart surgery, cancer, torn menisci [thin, fibrous cartilage between some joints], pyelonephritis [kidney inflammation] (the ‘phritis’ is there to terrify you) and abdominal fissures. Multiply us by the 82,26,140 over-60s across Canada, according to the 2016 census count, and you get the picture. We’re advancing through the system like a row of snowploughs on a four-lane highway. Traffic is slowing down for kilometres behind us.

A few months ago, I had my own experience with one of Toronto’s greatest hospitals—Mount Sinai. I won’t get into the ailment side of things—ouchy-wah-wah should cover it. Instead, I’m here to be your advance scout, to give you a first-hand account of the new frontier that awaits so many of us. It’s not a long journey as the Fitbit flies. Emotionally, though, the trek from good health to sudden-onset decrepitude is arduous and terrifying.

Sometimes at night when the hallways quiet down and it’s just you in the hospital bed, thoughts rush in. Like, Am I going to die sooner than I thought? And, Why did I live the life I did, now that I’m too feeble to do things differently? If you’re lucky, you might meet someone during your hospital stay who helps you find the most eloquent answer to those questions without even realizing that they have.

Not everyone enters the hospital portal the same way. My sister drove me to emergency on a dusky December afternoon, where we took a front-row seat facing the ferociously competent triage nurses. These nurses are the gatekeepers; they decide who gets through to the other side and how fast.

Like all good gatekeepers, the nurses start with a riddle. They repeated the same two instructions to all comers: Take offyour coat and get your health card out. Simple, right? No one got it right. Some people took offtheir coat halfway, then flapped their forearms like penguins, unable to reach their card. Others stared, stupefied. One man, 60-ish, fit and well-dressed, made the extra-two-hours-in-the-waitingroom mistake of questioning the nurse’s instruction. “I hurt my shoulder this morning so I’m afraid I can’t get my coat off.”

“How did you get your coat on if you can’t get it off?” the nurse asked.

This flummoxed the man and also me but not my sister Laura, a lawyer and nobody’s fool. “Good question,” she said, nodding.

Laura’s quick bond with triage took a careening left turn after we’d been admitted and she went back looking for the health card I thought I’d left behind.

“People always say they leave their health cards behind at triage and they are always wrong. Always,” said the triage nurse. She was angry. This was not good for my hospital future. “I’m not blaming you. We’re simply trying to locate the card,” Laura said in her reasonable lawyer voice as I finally found it in the last unsearched pocket and flashed it to my sister behind the nurse’s ironing-board back. Laura seamlessly changed tacks: “But that’s good to know, nurse. We’ll have another look.”

While admitted patients waited for our beds, our cots lined the hallways like out-of-commission bumper cars. There it was blared into us that this was a place of danger. Code red! Code white! Ding, beep, help! Judy Garland could belt a tune to the clanging trolley carts.

“A lot going on here,” said a big man in a striped polo shirt waiting for his mother outside the bathroom door. My cot was across from the bathroom, a theme to be continued. “Yup,” I said.

My son, Kelly, replaced Laura. He was joined by Mary, my daughter, who chatted it up with a flirty orderly.

Orderly: “It’s where that guy had the tablet and he handed it to the other guy.”

Mary: “The guy in the movie. What was his name?”

I Lazarused from my cot. “It’s where God gave Moses the Ten Commandments. Jesus Christ Almighty.”

At midnight, a nurse rolled me into Room 1408, the semi-private I had all to myself and—double score—the window bed. It was sparkling clean and still, more like being in an enchantment than a room. I was on hydromorphone [a pain reliever], true, but it seemed to make things more real rather than less. I texted Laura at 2 a.m.:

It was perfect. Who has a sister who texts back at 2 a.m.? I nodded off.

oh no. someone moved in next door very loud old a moaner lights and noise

On the other side of the curtain everything clanked and everyone spoke loudly. “One, two, three, lift.” The patient groaned. The nurse asked my new roommate if she would like her light left on, and she replied, “Yes.” Yes?! It was 4:37 a.m. I texted Laura to please bring earplugs and an eye mask. My cozy setup was leaking away.

At 6:30 a.m., the doctor woke me up and asked me how I was feeling. Could they turn out the light, I wanted to know. I watched the doctor leave, thinking I might have asked better questions, when a heavy-metal soundtrack started up just outside my room.