Happy Kitchen for a Postwar Home 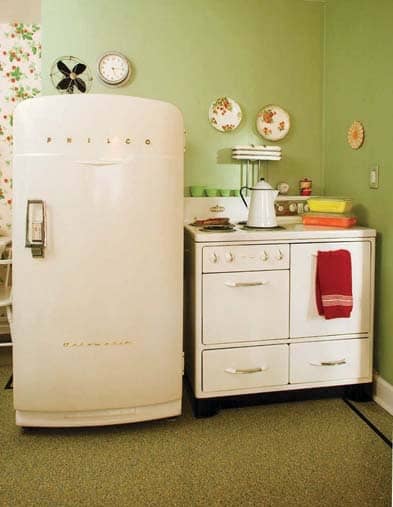 Most homebuyers would tear out a 1940s kitchen; this owner went in the opposite direction.

When Cindy Young was negotiating to buy her 1947 cottage in Portland, Oregon, the men selling it told her they were about to gut the kitchen. Cindy saw it as the most redeeming part of the fixer-upper house. She got the sellers to agree to leave the kitchen alone, and instead give her credit toward the Forbo Marmoleum floor she wanted to install. (She also got a new heating system and a fence in the bargain.)

Cindy boned up on the history of the period so she could appreciate the times. She culled decorating tips from advertisements in vintage homedécor magazines. “That’s where the idea to use linoleum countertops came from—instead of atomic-age boomerang laminate, which is more 1960,” Cindy explains. The entire house is furnished and decorated to the postwar period. A thorough search of neighborhood garage and estate sales turned up vintage accessories for every room.