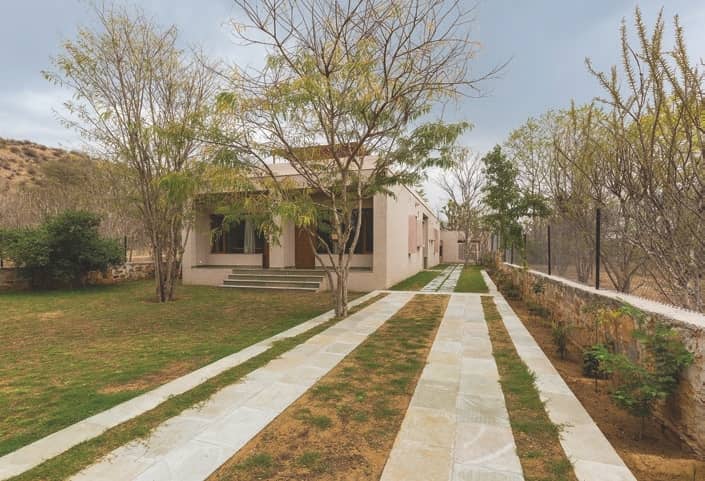 Weekend homes are becoming increasingly popular and hold for much design potential. Delhi Collective, a young multidisciplinary design firm has designed two such homes. The first is the Owl House, a weekend home nestled between the Aravalli hills of Jaipur, and the second is situated in the lush greens of Chhatarpur. In both the designs, the context and climatic conditions have played a key role.

The former is an earthy pastel structure visible at a distance among the leaves of the tall trees, and blends well with the surrounding landscape. Keeping the climatic conditions in mind, north – south orientation has been kept for all major openings with slit windows opening in the east and west direction. The grid layout and symmetrical front and rear elevations, reflect the simplicity of the design.

The elevation of the house has been divided into three parts – the heavy base that sits above the plinth, an offset parapet wall that breaks the vertical massing, and a floating pergola which accents the house. Veranda niches, comprising of Dholpur stone box windows, which cut through the east and west walls, break the flat façade on the front and rear. The base is finished with rough plaster, with a beige pink hue complementing the Dholpur stone box windows. The parapet has a lighter paint of the same hue with smooth plastering.