THROUGH A PEACOCK LENS 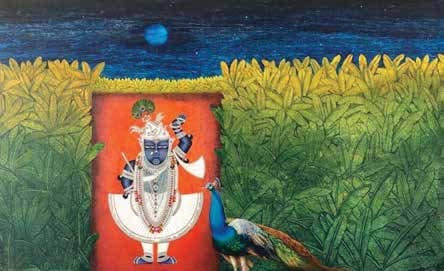 An essay on the popularity of the Krishna theme in Indian miniature art, follows the Krishna-themed curated group show in Ahmedabad, earlier this year.

Krishna has been a pivotal influence on visual art in India. This is evidenced even in the earliest Rajasthani / Indian miniature paintings. Shrinathji is a youthful Krishna in the numerous Pichhwai paintings of Nathdwara. Artists like Piyush Sharma and the late Amrit Lal Sharma dedicated their practice to the creation of radiant works in this specific style. Some of the miniaturists of this time are also practitioners of the blended school of the Mughal-Indian miniature style. This is evident in the works of contemporary miniature master Mahaveer Swami.

Another aspect of Krishna's influence on religio-cultural proliferation can be seen in the traditional Pattachitra art from Odisha. The Pattachitra is one of the ancient scroll-painting techniques on cloth and was originally a component of Bengali narrative art, functioning as a visual device during the performance of a song in praise of a deity or a mythological narrative. Krishna in Pattachitra could be seen in the richly decorative works of artists Arjun Prusty and Dilip Prusty. 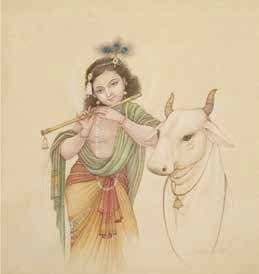 Similar in essence to Pattachitra, the Karnataka style of Chitrakathi is a folk-art form which accompanies the song and dance sequence as a scroll or picture plate. Jayashree Patankar has been a proponent of this style for years, and, not only have her works captured simple narratives but social and cultural nuances of India, as well. In addition, she adds textual references from the Bhagavata Purana to her works.