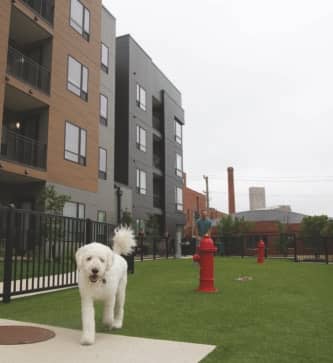 Dog-friendly apartment amenities are on the rise.

SOME OF THE fastest-growing residential amenities in the country aren’t for residents; they’re for canine companions. The Trust for Public Land found that the number of dog parks in the parks systems of the 100 largest U.S. cities has increased by 74 percent since 2009, and the number of pet-focused amenities is on the rise in housing developments across the country as well.

“[On-site dog parks] used to be kind of the hip, cool amenity to have,” says Mark Milford, associate vice president of 2B Residential, which manages 21 apartment complexes in St. Louis and southwest Illinois, “but a lot more people are factoring that into the design of the site plan for the building, just to make sure there is a private spot for people to take their pets… especially for urban properties.”

Nine of 2B Residential’s properties have on-site pet parks, and two more parks are under development. Three also have self-service pet spas and baths.