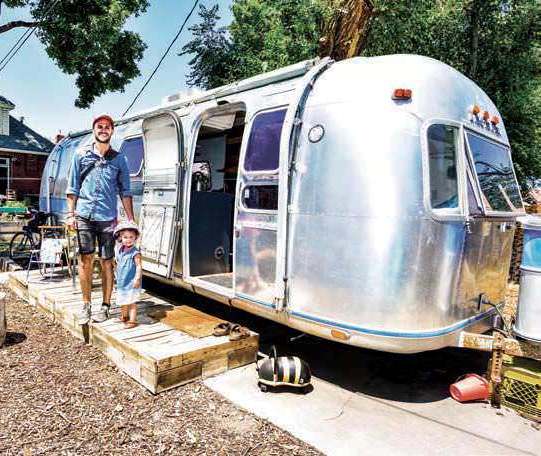 The company behind last century's hottest RV has no idea how it became so hip-and profitable-again. Or how to keep that momentum going.

Jordan Menzel had separated from his wife two years ago when he sold his Salt Lake City house for $350,000 and needed a place to live. “I didn’t want to buy a home again, and I didn’t want to spend obscene amounts on rent,either,” he says. Biking through town one day, he saw a 1976 silver Airstream for sale on the side of the road. Menzel had never owned an RV nor been inside an Airstream before, but with “dangerously little foresight,” he says, he bought the trailer for $4,000. Menzel, 31, spent three months tearing out the 40-year-old shag carpet and junking outdated appliances. Then he parked it in a friend’s 40-acre field. He’s still there— well, technically he’s moved to a nearby yard—and when he’s not, he rents his Airstream out on Airbnb for $100 a night. Menzel, who works in software marketing, estimates he’s already saved about $40,000 in rent. “At first people thought, Oh, Jordan’s going through a midlife crisis,” he says. “But it’s not a trend for me.”

That’s not to say Airstreams haven’t become trendy. In recent years, hotels, offices, and restaurants have cropped up in stationary Airstreams on both coasts. Five have become a motel in Santa Barbara, Calif. Another five sell ice cream and juice in Seaside, Fla. A concert venue in Austin uses one for its green room. The B-52s singer Kate Pierson—the redhead—has a handful of rentable Airstreams outside Joshua Tree National Park. And Zappos.com Chief Executive Officer Tony Hsieh has been living in one for nine months. He recently bought 20 more to create his own Airstream trailer park for the aspiring techbros he’s importing to redevelop downtown Las Vegas. “It’s by far my favorite place to live,” Hsieh says. “It has more amenities than the average hotel room.”

So many people are buying Airstreams that the company says it’s selling five times as many as it did in 2009. (And that doesn’t count vintage models like Menzel’s.) Airstream won’t disclose revenue, but its parent company, Thor Industries, sold more than $3.5 billion worth of recreational vehicles last year. “The question I used to get most often was: ‘Airstream, you still make those things?’ ” says Bob Wheeler, Airstream’s president. “People had no idea we even still existed.”

Since 1952 the company has been headquartered in a former World War II bazooka factory in Jackson Center, Ohio, a one- stoplight town 75 miles northwest of Columbus. There, Airstream makes about 60 towable trailers a week in models ranging from the 16-foot Bambi ($44,000) to the 28-foot Land Yacht ($146,000) to a touring coach built on a Mercedes-Benz chassis ($155,000), which the rich use when they want to ride in style. Everything is handmade the rivets fastened, the aluminum cut, the furniture sanded by the company’s 560 employees. This year, Airstream spent $6 million to build new office space and expand its factory by several thousand square feet. It also hired 130 people to catch up with demand.