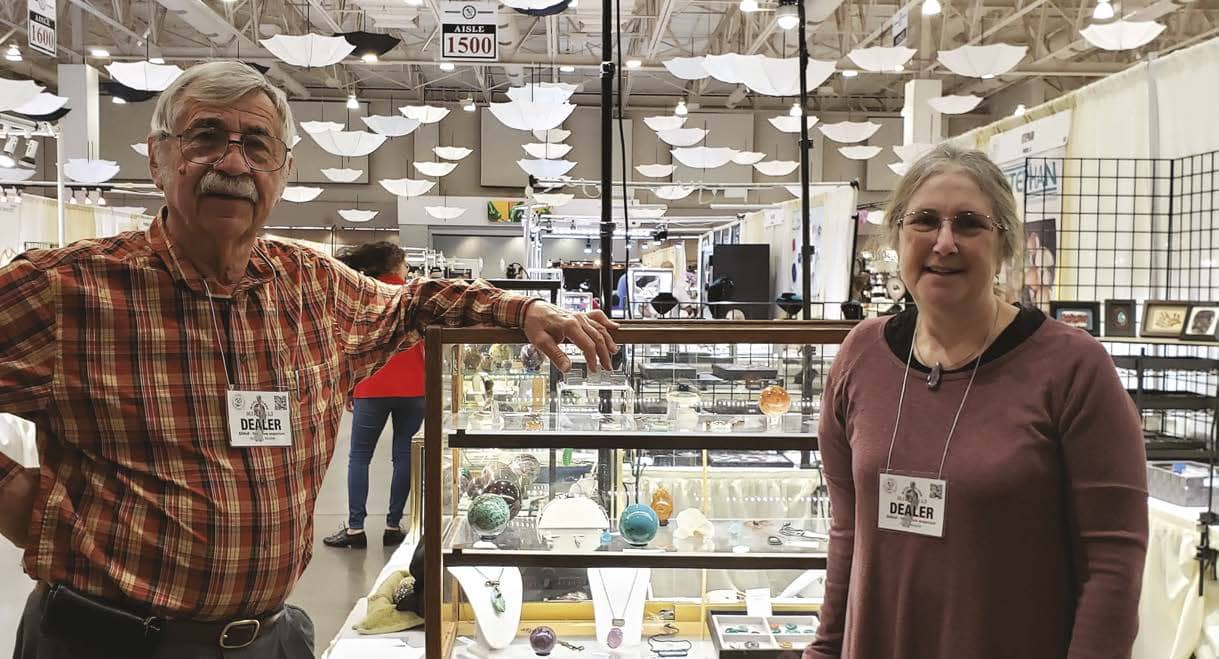 Wolfgang and Diana Mueller, known by their company name DiWolf, is a dynamic couple, with lots of knowledge and years of experience in lapidary and jewelry artwork.

Wolfgang Mueller is a retired geologist, mineral collector, and a very active lapidary. He has rock hounded in many places around the country, especially for his favorite wulfenite and copper ore minerals. He is famous for his hand-cut spheres and eggs, as well as rare gem material cabochons and one-of-a-kind beads.

Wolfgang was born in 1942 in the same town (Belgrade) as the person for whom the naming of wulfenite is based, Franz Wulfen, a Jesuit born in 1725. Wolfgang earned a bachelor’s and master’s degree in geology at the University of California. He worked at San Manuel Magma Copper, which was once a surface and underground porphyry copper mine in San Manuel, Pinal County, Arizona. During this time, he gained a deep understanding of all copper-related minerals, including the associated oxide minerals of chrysocolla, malachite, native copper, and cuprite. Later, he worked for the Magma Copper Company’s corporate entity Newmont Mining in Danbury, Connecticut.

Wolfgang moved back to Arizona, to the town of Oracle just north of Tucson, some 25 years ago, with his wife, Diana. She was born and raised in Ulster County, New York. The two met in the early 1990s and formed an amazing life and work partnership. They both love going rockhounding and mineral collecting, and are active members of two local clubs- the Tucson Gem & Mineral Society (TGMS) – Wolfgang joined in 1975 and Diana in 1995- and the Old Pueblo Lapidary Club (OPLC). Wolfgang has led several field trips for both clubs. He can still swing a 20-pound sledgehammer, which I saw him do when my husband and Wolfgang tried to break-up a considerable boulder to extract precious chrysocolla, during a TGMS field trip to the Asarco Mine in 2010.

Wolfgang also serves as Curator of Minerals at the Bullion Plaza Cultural Center & Museum, which is in historic Miami, Arizona, about a two-hour drive north of Tucson. It is a great little museum with large mining equipment outside, and a terrific mineral exhibit inside featuring minerals and fossils from the Globe-Miami area and beyond. Wolfgang worked very hard for the proper display of the museum’s exhibits.