Turning to the “Other” Tourmaline Crystals 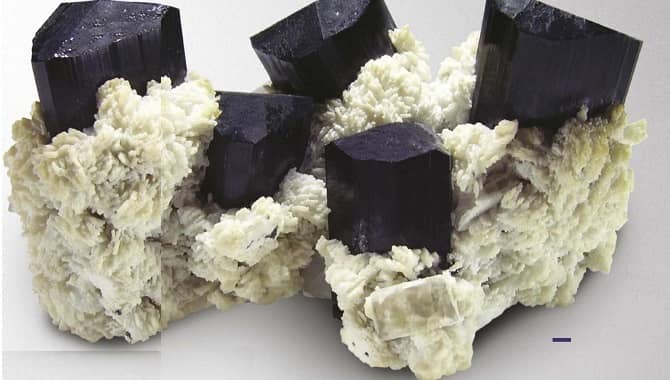 Of all the mineral groups collectors enjoy, the tourmaline group includes the nicest variety of colorful gem crystal specimens. It also happens to be among the most chemically complex gem species. As an example, uvite, which is not often viewed as colorful, is made up of ten different elements that repeat, which means, a single molecule of uvite is comprised of almost 60 atoms.

Many collectors are particularly attracted to elbaite, the most colorful and popular of the tourmalines. The chemistry of elbaite is also quite complex. One scientist even referred to it as a “garbage can” mineral because it seems to take in any stray elements available within the solution it develops. Tourmaline’s ability to accept trace elements accounts for it acting as chromophores, giving elbaite its variety of colors. Other members of the tourmaline group proceed similarly and are found mainly in pegmatite deposits.

Pegmatite deposits form in the final stages of a deep-seated granitic mass called a batholith, where different elements tend to accumulate. As a batholithcools over millions and millions of years, molecules of like minerals develop, while basic quartz, feldspar, and mica form a matrix. As this happens, the more volatile elements that crystallize at much lower temperatures, including fluorine, boron, beryllium, lithium, uranium, and others, remain longer in solution or as part of the vapor and hydrothermal components under extreme pressure. Such residual fluids can thrust into rock openings forming veins, sheets, or dikes and cool slowly allowing larger than standard crystals of feldspar and quartz to form in an interlocking system called graphic granite. 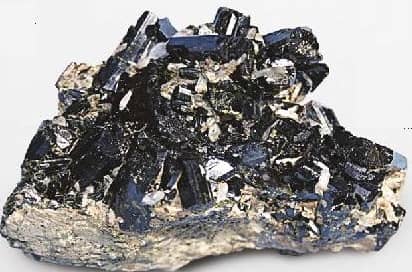 In such instances, a remaining volatile solution will fill any openings in the pegmatite. Within such openings or “pockets,” the slow growth of large crystals of the remaining elements occurs at lower temperatures. The lighter elements like fluorine, sodium, boron, beryllium, and calcium form the rare pegmatite minerals collectors seek. During this phase, elbaite attracts a variety of odd elements, which is the reason behind the nickname “garbage can mineral.”

Proof of this willingness of elbaite to accept almost any element was brought home for me in the form of a Baja California, Mexico elbaite specimen. We had it scanned to determine its composition, and two percent zinc showed up in as part of its chemistry! Another example came to light in 1989, with the fantastic discovery of electric blue elbaite in Paraiba, Brazil. The blue color is due to copper acting as a chromophore. A year after the discovery in Brazil, similar copper blue elbaite was found in Mozambique and Nigeria.

While amazing and enchanting, the problem rockhounds encounter regarding colorful gem tourmalines is the price, as they often cost more than an average collector can pay. Even the rare colorless tourmaline, achroite, has become popular and costly.