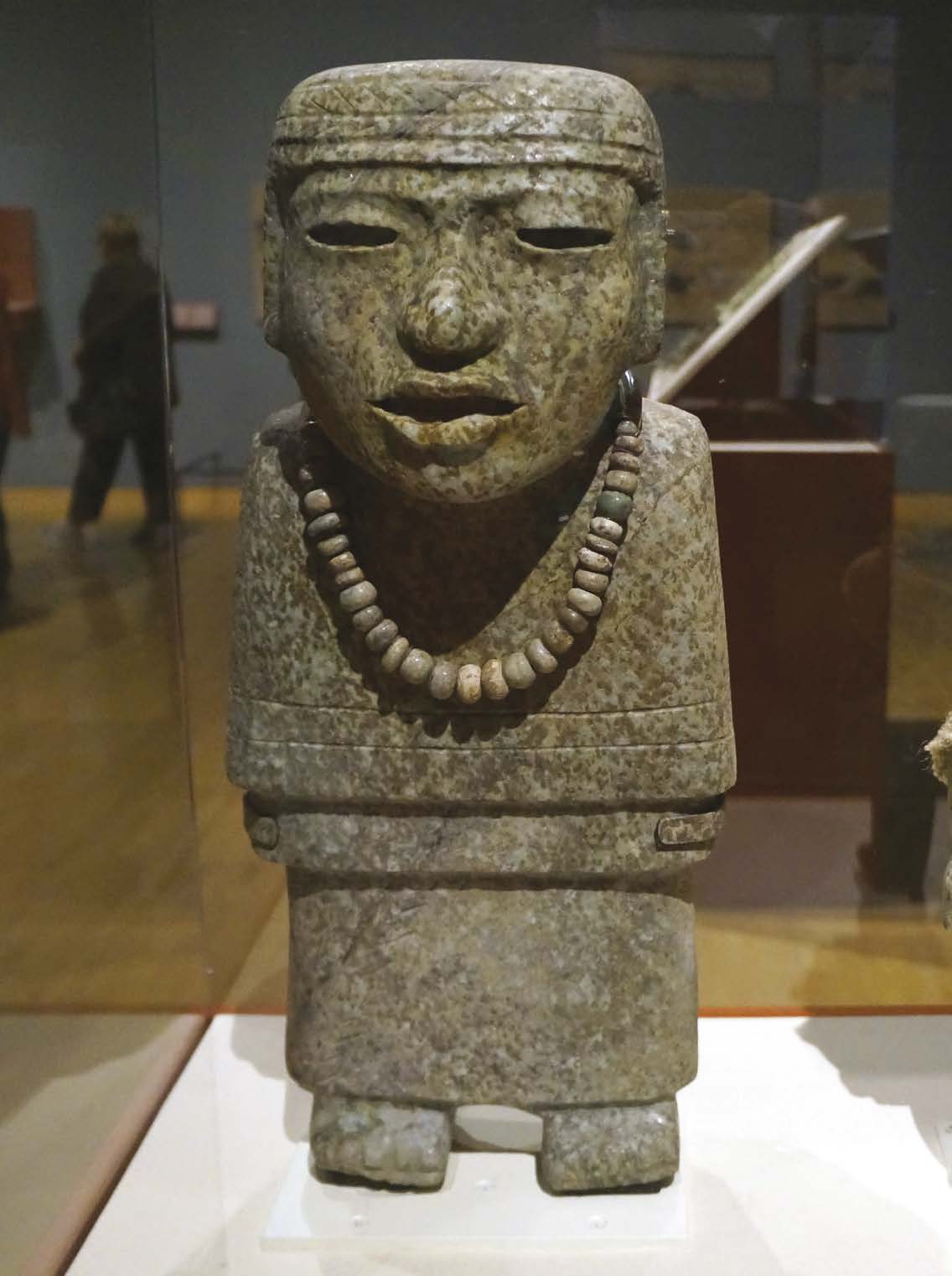 Imperial green jadeite beads were on display separately as well as on figurines.

Teotihuacan: City of Water, City of Fire was an amazing traveling exhibit with artifacts from the ancient city of Teotihuacan, which is located just outside of Mexico City, in Mexico. The exhibit was held at the Phoenix Museum of Art, from October 2018, through January 27, 2019. It was organized by the de Young Fine Arts Museum in San Francisco and the Los Angeles County Museum of Art, in collaboration with the National Institute of Anthropology and History of Mexico (INAH).

My husband, Andrew and I, took a day trip to Phoenix to witness this fabulous exhibit, which brought together more than 200 artifacts recently discovered, along with others found over a century ago. Exhibited were large-scale sculptures, reliefs, friezes, masks, brightly-colored murals, ceramic vessels, and gemstone carvings crafted in jade and other greenstones, obsidian, alabaster onyx and shell, and stunning jewelry. All these amazing artifacts offered comprehensive insight into the art, everyday life, and religion of Teotihuacan, as well as its trade and influence on other regions of Mexico.

Water and fire were the essential elements that contributed to the power and devastation of the city, and the Teotihuacan art represents manifestations of these natural forces. Hence the exhibit’s name Teotihuacan: City of Water, City of Fire.

ANCIENT CITY AND RUINS AT TEOTIHUACAN

A few years ago, we were delighted to be able to visit Teotihuacan and admire up close the famous monumental pyramids. The ancient city and ruins are located about 25 miles northeast of Mexico City. In 1987, the site was designated by UNESCO a World Heritage Site, and it receives over 4 million visitors per year. Several of the artifacts featured in the Phoenix Art Museum exhibit, we had previously seen at their regular exhibit home- the National Museum of Anthropology in Mexico - a behemoth of a museum, where we spent an entire day looking at all of the amazing artifacts.

The Teotihuacan metropolis was situated in the Mexican Central Plateau. The ancient city flourished and evolved into a major urban center with a population of over 150,000, between 100 BCE and 650 CE, and is considered the largest city in the pre-Columbian Americas. The city was abandoned for unknown reasons, and central Mexico was later dominated by the Toltecs until about 1150 CE.

We still do not know much about the people of Teotihuacan, nor the original name of the city or the culture. The name Teotihuacan was given to the city by the Aztecs, who came from the north in the 14th century to the Valley of Mexico and found the abandoned city. Translating the name from the Nahuatl Aztec language, it meant “Place of Those who Have the Road of the Gods” or “Place Where Men Became Gods.” The Aztecs, in awe of these magnificent ruins, claimed a common ancestry with the Teotihuacanos and used the place as the setting of their myth of creation. 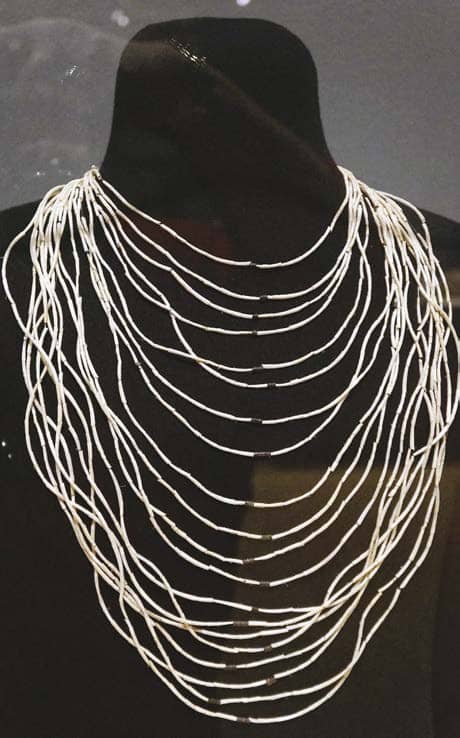 This stunning, multi-strand shell necklace was made of sea urchin spine and dentalium shells (tooth shells), dating back to 450-500 CE. It is considered a very rare and exotic specimen for Teotihuacan - even by today’s fashion standards.

Another famous pyramid at Teotihuacan is the six-level step pyramid known as the Feathered Serpent Pyramid. The outside edges of each level are decorated with feathered serpent heads alternating with those of another snake-like creature, often identified as the god Tlaloc. In 2003 archaeologists discovered a tunnel underneath the pyramid, stretching over 300 feet to the center of the citadel. An entire underworld, or bajo mundo, was revealed. It contained an astonishing array of objects, including greenstone objects, iron-ore mirrors, and slate discs, many of which were on display at the special exhibit in Phoenix. 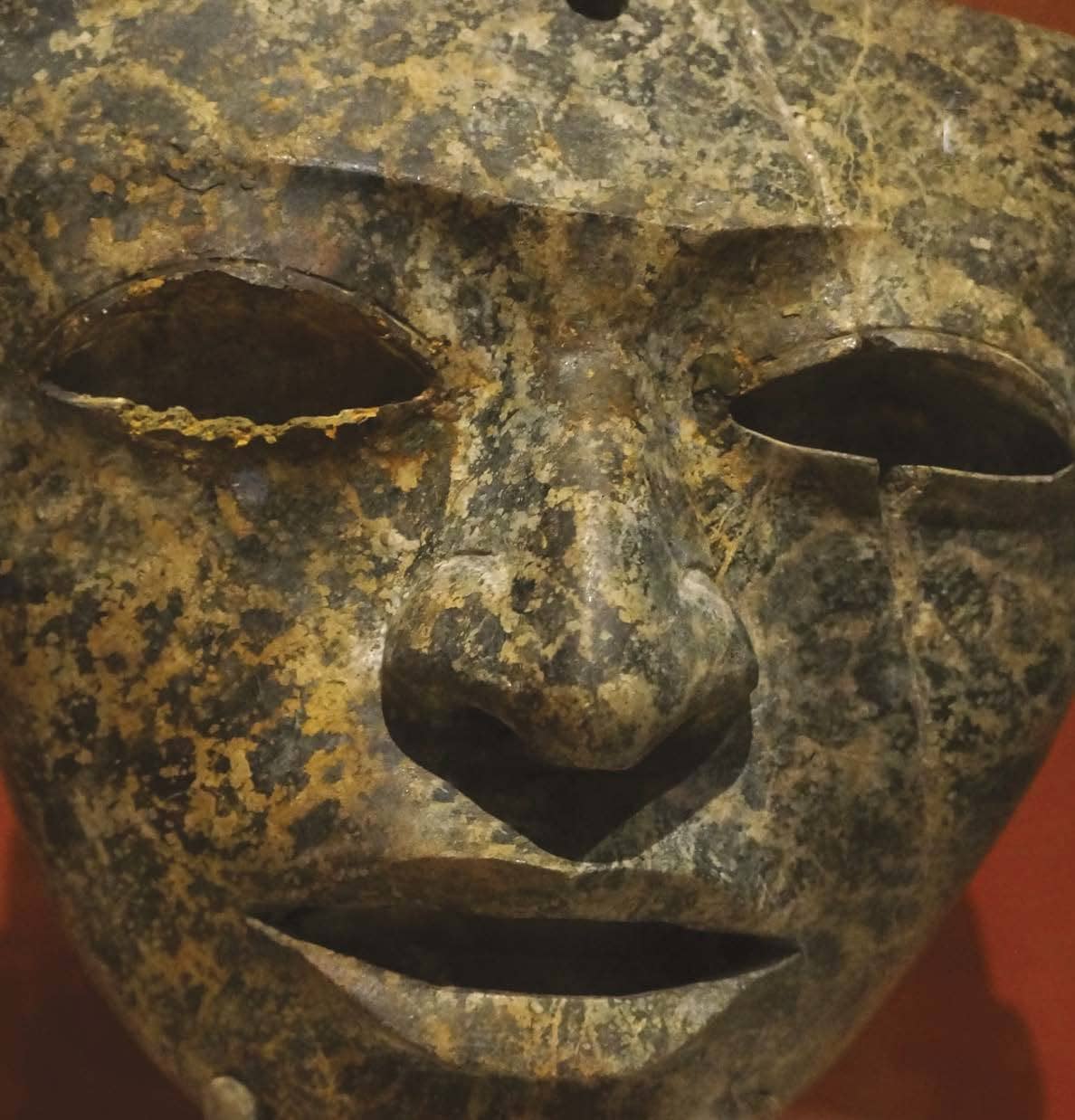 A beautiful, stylized mask made of mottled listwanite (a serpentinite) is among several masks found in Teotihuacan.