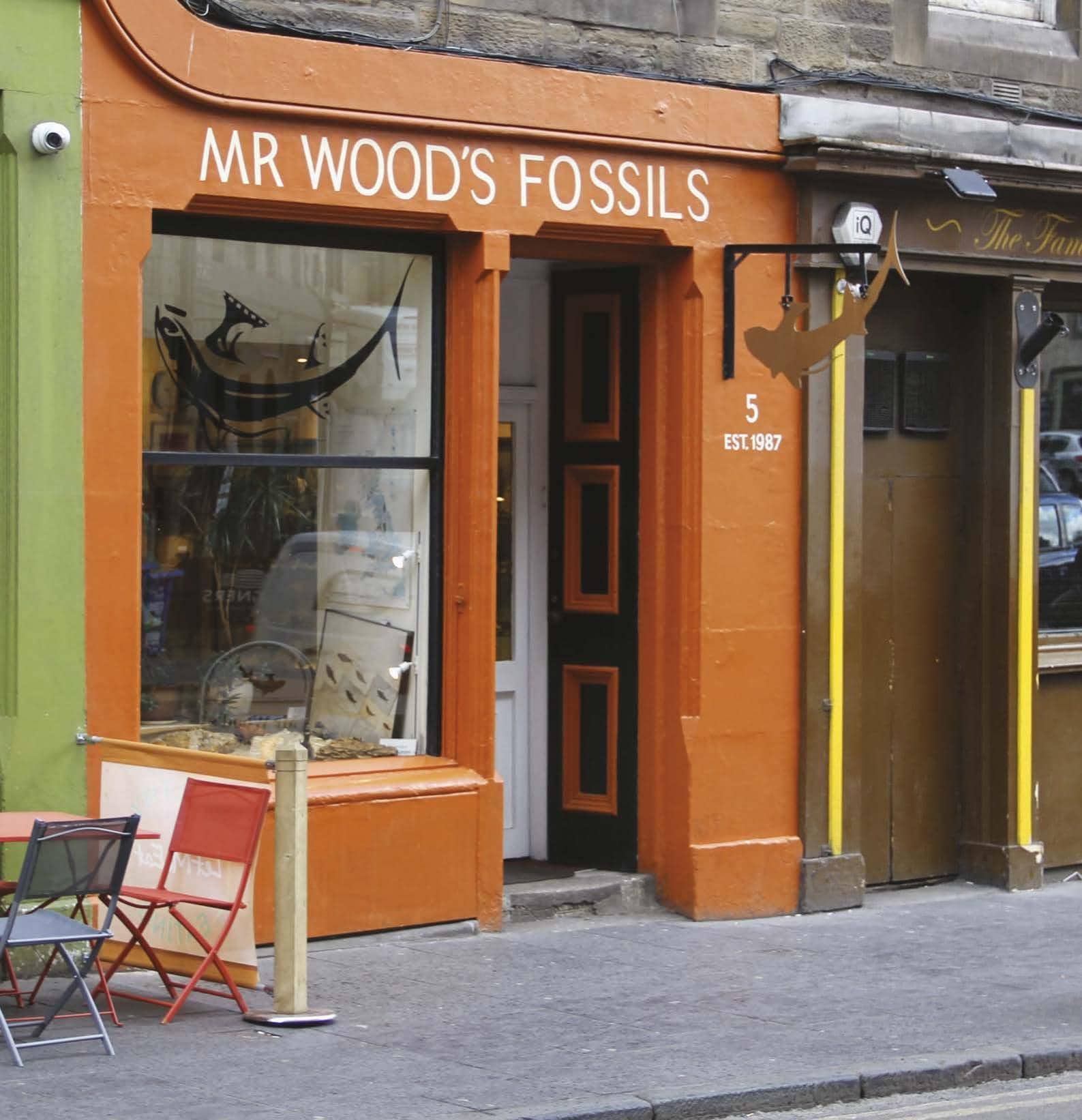 Much Scottish blood flows through my veins. Thus, I’m unabashed in promoting the once and future independent nation of Scotland to anyone and everyone who will put up with my raves. The Scottish connection flows not only from my Fordyce grandmother and my wife’s Campbell roots (sincere and eternal apologies to Glencoe) but also from our one-year-old Scottish grandson who will serve as a pull to the Caledonian nation for some time to come.

These Scottish roots didn’t become personal until not so many years ago via our daughter, Hannah.

Hannah had moved to Edinburgh, Scotland, from Berlin, Germany, precipitating a trip by Nancy and me in May 2015. We had journeyed from California to bear witness at her wedding with Peter—but not before checking Google to discover a true-blue, bona fide rock shop located within walking distance from Hannah and Peter’s apartment. Thus, our first encounter with the little shop called Mr. Wood’s Fossils located at 5 Cowsgatehead in the Grassmarket of Old Town Edinburgh, the old “hanging district” for public executions but now a hip tourist destination.

Forget wedding flowers, caterers, bagpipers, kilts, and associated matrimonial arrangements! Within hours of arrival, bleary-eyed but rockhound-alert, Nancy and I were checking out shelves at Mr. Wood’s

Fossils, a classic rock shop with a view of Edinburgh Castle from the street out front in an enchanting district of cobblestone lanes that inspired J. K. Rowling for the Harry Potter novels. Our daughter hurried us through this initial visit, insanely insisting wedding arrangements must be made, but this proved to be the first of many visits to Mr. Wood’s. After 2015, we returned in 2016 and 2018, with yet another visit planned for the 2019/2020 holiday season. (In between, we’ve enjoyed a Christmas gift from Hannah and Peter—a fine Devonian fossil fish—courtesy of Mr. Wood’s.) Although our trips have become a near-annual occurrence, our 2015 visit remains memorable in that it was our very first encounter with Scottish rocks and fossils and their glorious history in the annals of geology.

That 2015 visit focused on agates. (See the April 2016 issue of Rock & Gem.) We had made connections with the Scottish Mineral & Lapidary Club (SMLC) an in the nearby harbor town of Leith, where, after our initial brief visit to Mr. Wood’s, SMLC members showed us spectacular displays of Scottish agates and minerals in their little nonprofit club museum. Impressed by what we saw, we returned to Mr. Wood’s, given that its web site indicated Scottish agates could be had and because we had fleetingly seen a few on display. 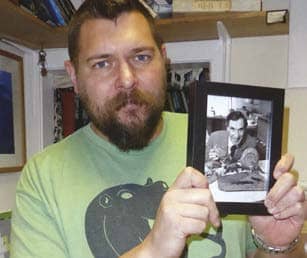 Before we get to those agates, though, some background. Mr. Wood’s Fossils was founded by Stan Wood, a self-taught fossil collector who passed away in 2012. The UK has seen a long, fine tradition of amateur and self-taught paleontologists, such as stonemason Hugh Miller, Mary Anning (of “she sells seashells by the seashore” fame), and Stan Wood. Nigel H. Trewin published the book Scottish Fossils in 2013, which he dedicated to all such collectors, “and particularly to the late Stan Wood for his many important finds and excavations that have contributed so much to science in recent years.” Contrary to many other technical sciences, Trewin notes how “paleontology is a science where expert amateurs can make a valuable contribution,” and he heaps tribute on responsible, expert commercial collectors, singling out Stan Wood “and the superb finds he made.”

Stan’s efforts as a collector proved significant, indeed. For instance, in 1984 he discovered the skeletal remains of Westlothiana lizziae on a small rock slab that would likely have gone unnoticed by most of us. Informally called “Lizzie,” this find proved to be a key link between fishy amphibians and their land-loving reptilian descendants. Museums and collectors as far away as Japan lusted after Lizzie, but Stan wanted her to stay in Scotland, so he sold his slab to the National Museum of Scotland for a quarter of what he could have received from the many foreign offers.

There was a moment in Earth history between the appearance of fish and the sudden appearance and evolution of tetrapods, or critters with four limbs, that led to none other than us. But the fossil record of that transition at the end of the Devonian and the beginning of the Carboniferous Period was a frustratingly blank slate. Paleontologists even put a name to their frustration, referring to this mysterious period as “Romer’s Gap”. Stan Wood’s collecting efforts with Lizzie and other finds helped to fill that gap. Thus, while considered an amateur, Stan entered the hallowed halls of truly significant paleontologists, and his finds prompted renewed studies of the “East Kirkton Quarry” that had been known to paleontologists since 1825 but whose real significance was not revealed until Stan came along.

Stan’s other discoveries include the “Bearsden Shark Dig” that produced a strange shark Akmonistion from the Carboniferous Period that today serves as the symbol for Mr. Wood’s Fossils. Its outline hangs from a pole above the shop door, is painted on the shop window, and is engraved on the shop business cards and website (www.mrwoodsfossils.co.uk). 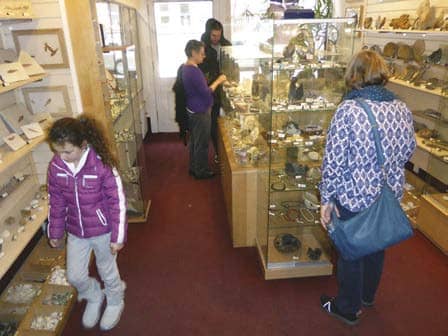 Stan kept his many finds in his garage in the West Lothian town of Livingston while providing specimens to museums for research and display. Folks who saw his collection always encouraged him to open a shop to share his discoveries with the public. He finally did so in 1987, starting with just three or four shelves of self-collected specimens until he found a wholesale supplier in the UK to expand his inventory.