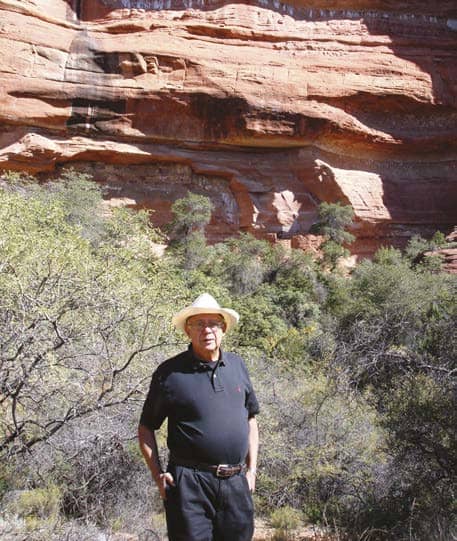 In the shadow of the famous red cliffs of Sedona, the ancient ruins of Palatki remain silent for nearly 700 years. The Palatki Red Cliffs is a designated World Heritage archaeological site that contains cliff dwellings, pictographs, and petroglyphs created by the Sinagua people of the Ancestral Puebloans.

The Palatki site is under the auspices of the Coconino National Forest, Red Rock Ranger District, and managed by the U.S. Forest Service. Palatki is open every day to visitors, but because the cliff dwellings are limited to groups of 10 people at a time, reservations are required. Park-ranger-led tours occur every 30 minutes.

From the parking lot, visitors take three trails to the points of interest: one path leads to the Sinagua cliff dwellings, one to a view of the cliff dwellings, and the last to alcoves that shelter the pictographs. All trails are relatively easy to access, walking over a moderate incline.

My husband and I visited the Palatki Red Cliffs Heritage Site during one of our many trips to the Sedona and Cottonwood area. It is a beautiful site, beaming with history and art. The site is considered an Arizona treasure, with fine examples of Sinagua art and culture, set against spectacular red cliffs landscape.

Archeologists believe that the construction of the cliff dwellings started around AD 1125 and that the Sinagua people used them until about AD 1300. The Sinagua people inhabited the Sedona and Verde Valley area from AD 500 to 1425. Although there remains debate over why the site was abandoned, some believe prolonged drought and warfare with enemy tribes are partly to blame.

In the Hopi language, Palatki means ‘red house.’ The cliff dwellings were built in the red sandstone cliffs, under south-facing overhangs for shelter and winter sun. Two separate buildings or pueblos exist. The east alcove consists of five rooms on the first floor and three rooms on the second. The second house, the west alcove, consists of five rooms and may have included a community room or kiva (ceremonial room). The west alcove has been closed to the public for several years due to its fragile condition. Researchers believe 40 to 80 people, possibly kin or two families may have lived here.