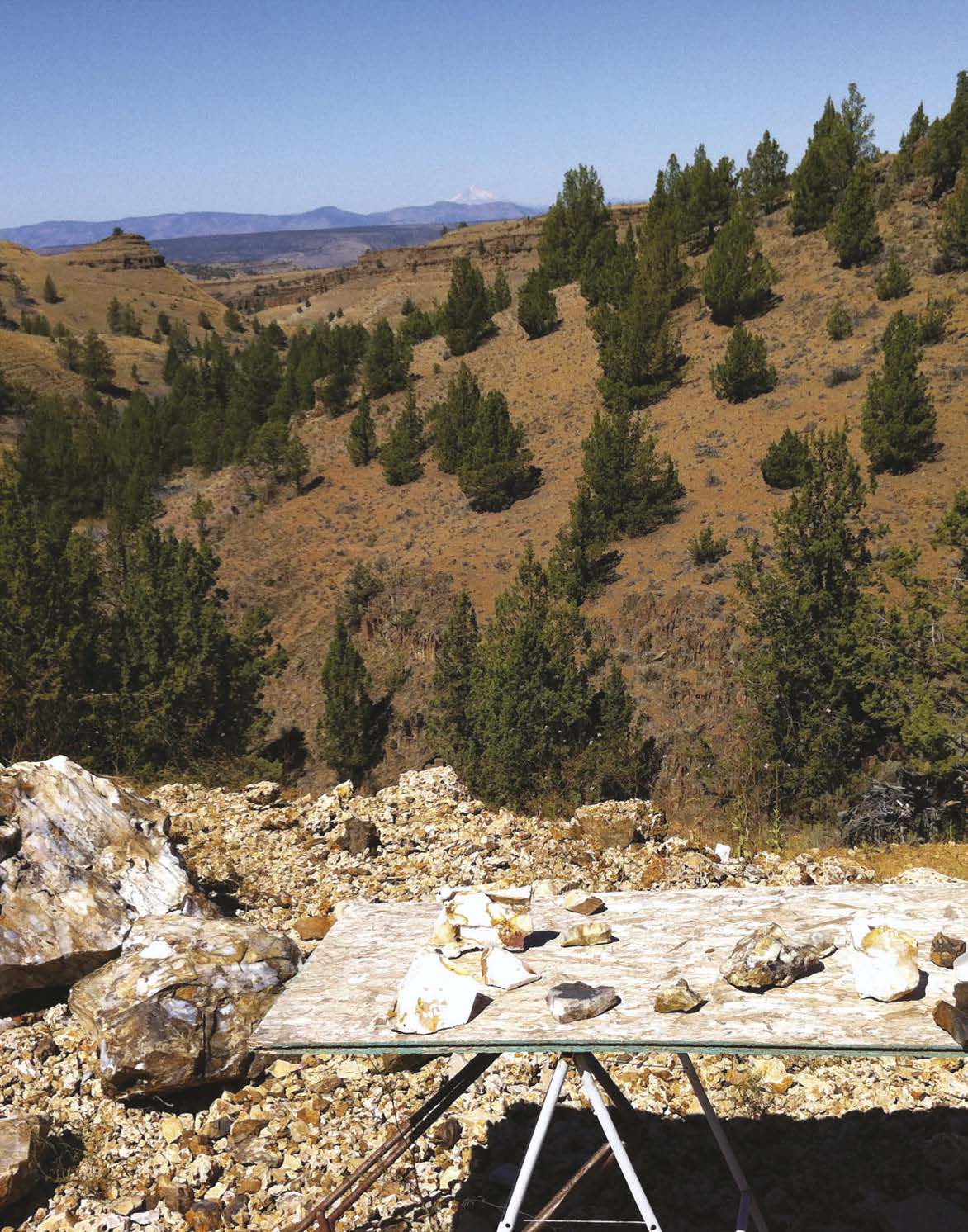 In Central Oregon, where I live, there is an adventure to be had by heading north on Hwy 97 past Madras, following along rolling farmland, and past the famous Richardson’s Rockhound Ranch, but, there is no world wherein a rockhound drives past Richardson’s. So, after stopping at Richardson’s for a visit, the journey continues until NE Pony Butte Road, where a right turn leads south toward Ashwood. 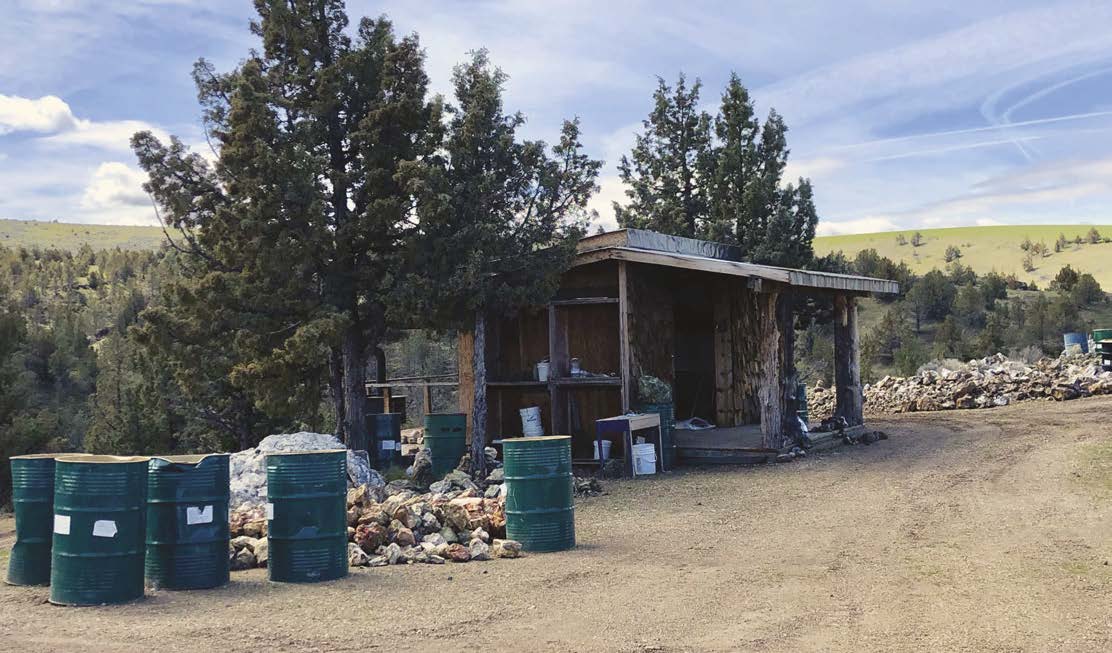 From there, the road leads travelers along hills and beautiful vistas, winding around cliffs and squeezing through an aspen filled creek canyon, a creek that begins at the Polka Dot Mine. Nine miles in, the road reaches open hills and there on the right is the polka-dotted trailer that marks the entrance of the Polka Dot Mine.

The Polka Dot Mine is owned by Dale and Sue Huett, one of many mines they own or control through their company West Coast Mining. The company uses the Polka Dot Mine as the retail and wholesale outlet for material mined on-site, as well as from other West Coast Mining locations in the area. Endless piles of rock, dozens of 50-gallon barrels full to the rim, and cut slabs dot the area. Anyone who loves rock will find great material for purchase. Available material includes Polka Dot agate, Gary Green jasper, Blue Mountain jasper, 79 Bed thunder eggs, Amethyst Sage agate, Paiute agate, and various picture jaspers, among others. 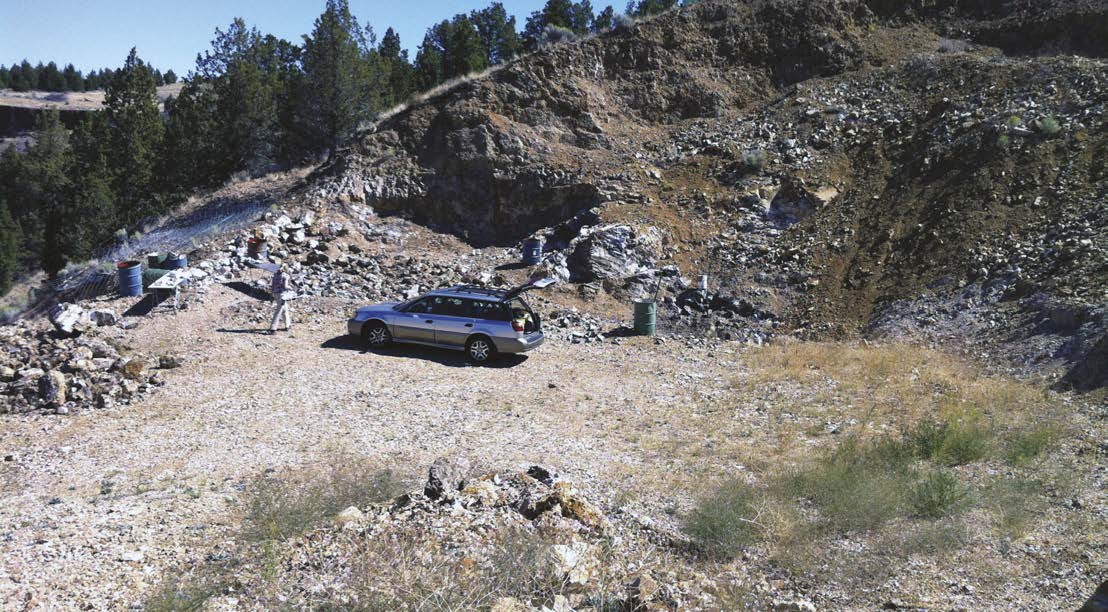 In 2019, after 38 years of thinking Polka Dot agate was the only gem in the mine area, Dale accidentally uncovered a thunder egg deposit that had never been discovered, just 150 yards from the mine. The Canyon Rim thunder egg deposit is now open for public digging, producing some very large and impressive specimens.

The Polka Dot Mine is no longer open for public digging due to safety concerns, however, the pit is open to walk through, and some pieces can be found on the ground. The mine continues to produce a large quantity of material, which is available at the mine shack. Material coming out of Polka Dot appears to be opaque white, brown, green or reddish jasper, translucent agate with light blue tones, and a mix of opaque and translucent.

My favorite material is what looks like rolling brown hills beneath a white sky, like picture jasper. All the material is hard crypto-crystalline silica and takes a high polish. Dotted through the gem are the polka dots that gave the stone its name, along with balls of yellow, brown, or reddish hematite floating within. Dendrites of manganese oxide can sometimes run through the stones, creating beautiful inclusions, but most of the dendrites I have found in Polka Dot are on the surface and grind off quickly.

NEW DISCOVERIES AT A FAMILIAR SPACE

Several years ago, Dale was backhoe excavating an agate vein in the pit and broke open the top of a cave. This turned out to be one of three known mines that were dug by Native Americans at this location, and the openings of the mines had been filled in by erosion or Native American miners, hiding them for centuries. In the second of the caves that Dale discovered, the mining tools were on the floor of the cave where the last miner had left them. Wood from the last fire in the cave was also still present after the last miner had walked out.