MINERALS OF THE MOON 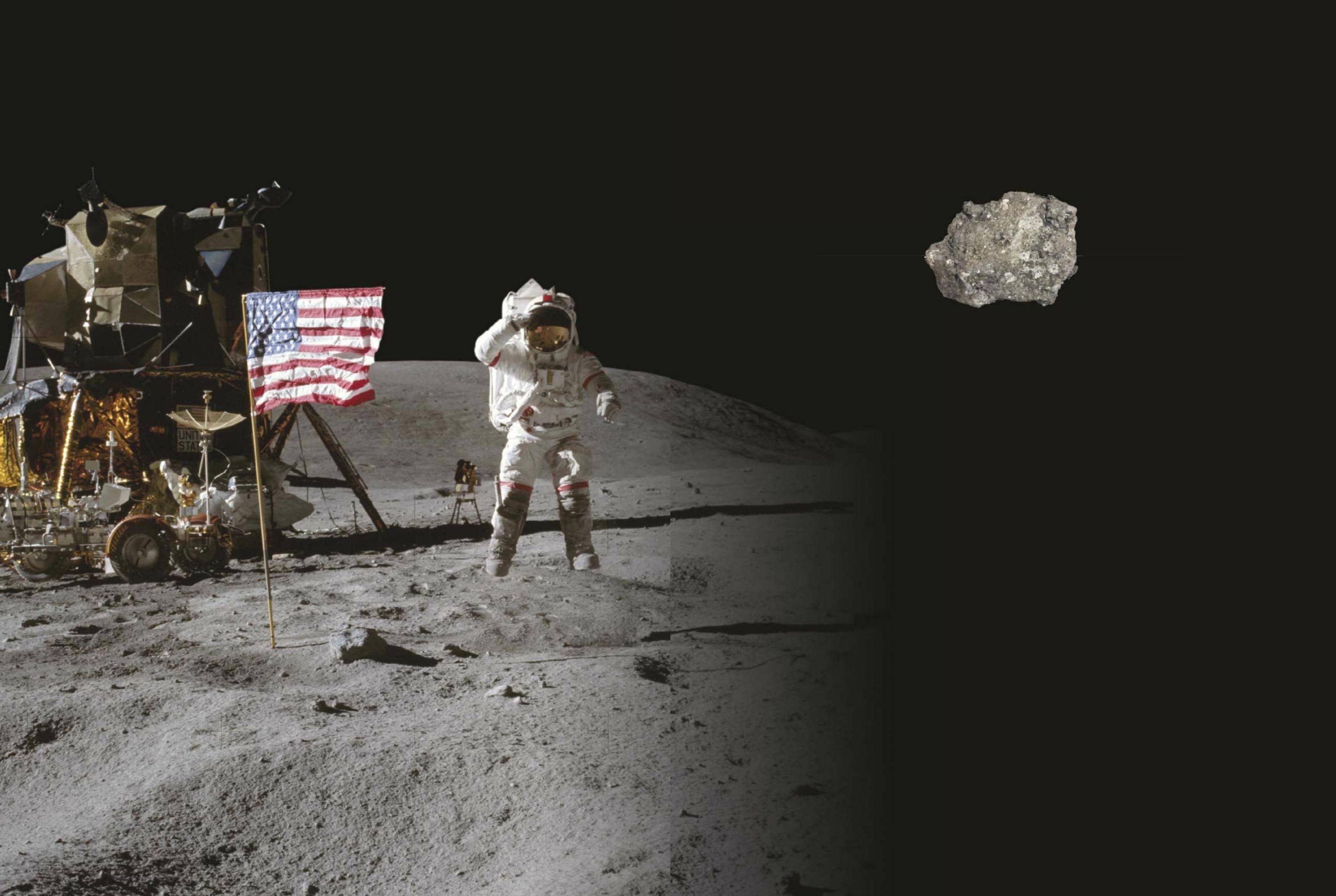 THE ONGOING STORY OF THE APOLLO MOON ROCKS

Arguably the greatest mineral-collecting field trip of all time took place in July 1969, when two rockhounds gathered 48 pounds of specimens at a never-before-collected locality. Although admittedly short on aesthetic appeal, these specimens were a scientific bonanza and the most valuable mineral specimens ever collected.

The collectors were National Aeronautics and Space Administration (NASA) astronauts Neil Armstrong and Edwin E. “Buzz” Aldrin, Jr., the first humans to set foot on the Moon. The field trip was NASA’s Apollo 11 mission, and the locality was the Moon’s Sea of Tranquility. By 1972 when the Apollo program ended, 12 astronauts had walked on the Moon and collected 842 pounds of “moon rocks.” The significance of these celebrated rocks and what became of them during the half-century that followed is a fascinating tale of high security, meticulous accounting, worldwide distribution, unprecedented scientific study, and even a bit of fraud and greed.

Before Apollo, our geological and mineralogical knowledge of the Moon had amounted to educated guesswork based largely on the study of lunar meteorites. But lunar meteorites, pieces of the Moon’s surface that had been dislodged by meteoritic impacts and wound up on Earth, are rare. And their scientific value was limited because of unknown lunar geographic origin, alteration incurred in the heat of atmospheric entry, and long-term exposure to the Earth’s atmosphere. 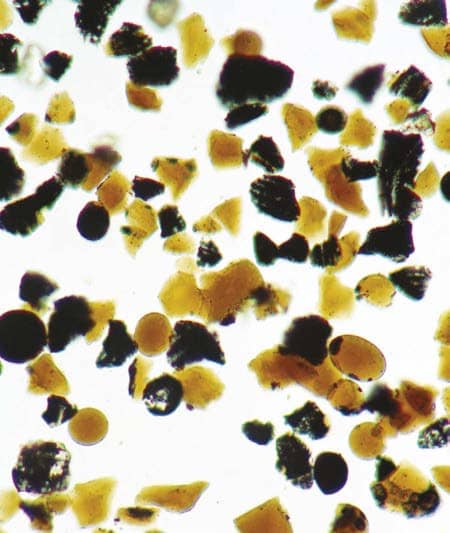 Pre-Apollo theories abounded about the Moon’s origin. One suggested that the Earth’s gravitational field had captured a preexisting extraterrestrial body, another that the space debris that formed the Earth had also accreted into the Moon. Still, others postulated that a rapidly spinning proto-Earth had centrifugally spun off the moon material, or that the Moon consisted of debris from an asteroid colliding with a still-molten Earth.

But after studying the Apollo moon rocks, scientists agreed that a Mars-sized body had collided with a proto-Earth 4.6 billion years ago, ejecting molten material that solidified as a satellite in Earth’s orbit.

The moon rocks also revealed that the first minerals to crystallize on the slowly cooling, still-molten lunar surface were iron-magnesium silicates of the olivine and pyroxene groups. Being relatively dense, these minerals sank into the lunar mantle. Next to appear were plagioclase feldspars, a group of calcium-sodium-aluminum silicates, which rose in the magma to form the lunar surface.

For the next billion years, intensive meteoric bombardment cratered much of this new surface. Then, as bombardment decreased and the Moon continued to cool and contract, huge amounts of basaltic magma extruded onto its surface.

The Moon’s surface is comprised of dark and light areas. The dark areas are “maria” (MAR-ee-ay,) singular “mare” (MAR-ay), a word derived from the Latin mare, meaning sea, and first used by early astronomers who assumed these areas were actual seas. Covering 20 percent of the lunar surface, maria are flat, lightly cratered basins and plains of basalt.

The light areas are lunar highlands that are composed of the Moon’s primordial crust. These heavily cratered, rugged regions consist largely of anorthesite, a rock rich in plagioclase feldspars.

“Regolith,” a word stemming from the Greek rhegos, meaning “blanket,” and lithos, or “stone,” covers much of the lunar surface. “Stone blanket” is a fitting term for this layer of unconsolidated dust and fragmented rock that lies atop bedrock. Regolith results from the intense meteoritic bombardment that once pulverized the lunar surface. This powdery-to-sandy mix of basalt, basaltic glass, anorthesite, and breccia is the “dirt” in which the astronauts left their footprints. 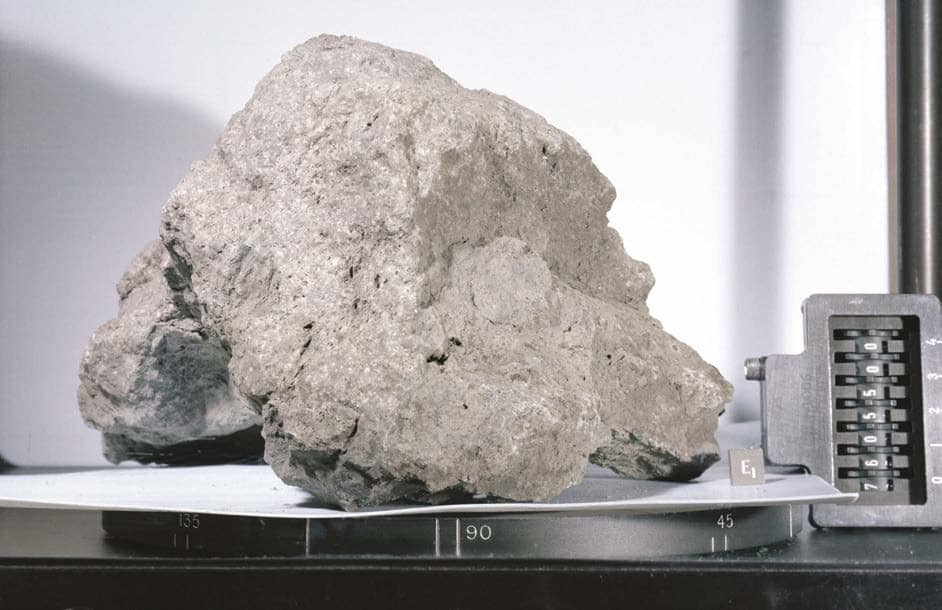 Terrestrial and lunar mineralogy and geology differ greatly. Compared with that of Earth, the lunar crust has few minerals. And unlike Earth’s minerals, those on the Moon formed in a chemically reducing environment devoid of liquid water and free oxygen. Although fairly abundant, most lunar oxygen is bound into silicate and oxide minerals. Hydrous or basic minerals such as clays and micas, which have attached water molecules or hydroxyl ions and which are abundant on Earth, are non-existent on the Moon because of the lack of chemical oxidation. The lack of chemical weathering is apparent in the unusually sharp grain boundaries seen in thin sections of lunar rocks.

The Moon’s absence of liquid water and free oxygen also precludes hydrothermal mineral emplacement. And while water is the Earth’s primary agent of erosion, lunar erosion occurs only through meteoric impacts. Although the Earth is still volcanically active, lunar volcanism ended 50 million years ago. Also unlike Earth, the Moon, with mantle material too thick to circulate, has no tectonic-plate activity. And with no protective atmosphere, the Moon cannot retain solar energy or shield itself from meteoric impact, solar wind, and solar and cosmic rays.