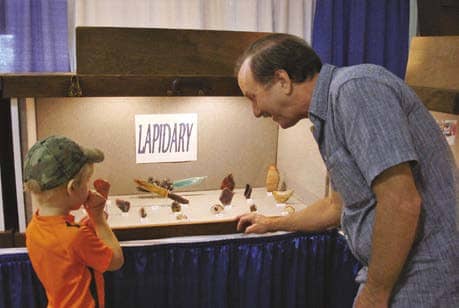 The National Rockhound & Lapidary Hall of Fame was founded in 1987 by celebrated author and lapidary, the late June Culp Zeitner. It was created to recognize excellence in the earth sciences by inducting one or more persons each year in six categories: Minerals, Fossils, Metal Craft, Lapidary, Education, and Tribute (Deceased). Rock & Gem Senior Editor, Bob Jones, has received this honor and was inducted in the Minerals category in 1992, as was I, in the Lapidary category in 2003. Nomination forms, past inductees and information can be found at http://www.rockhoundandlapidaryhalloffame.org

In 2018, Bernie Emery was inducted into the National Rockhound & Lapidary Hall of Fame under the Education category. His nomination was submitted by me and supported by six more supporting letters from Bob Jones, Michael Seeds, Franko Zambrotto (also an inductee), Pam Jeffries, Richard Hoff, and Lynne Emery. We could have equally nominated him for the Lapidary category, but we wanted to reward him for all his incredible, selfless volunteering work as a lapidary teacher.

A native of Baltimore, Maryland, Bernie is a fabulous lapidary, excelling in freeform cabochons, knife blades and knife handles, faceted gemstones, and in recent years, freeform and organic carvings, all of which he usually exhibits at local shows. He is also a graduate gemologist of the Gemological Institute of America (GIA), receiving his certification in 1987.

I have known Bernie for nearly 30 years, through our associations with the gem and mineral clubs in Maryland. He has spent his entire adult life serving selflessly the lapidary and mineral hobby as show chairman, auction chairman, and field trip chairman or leader.