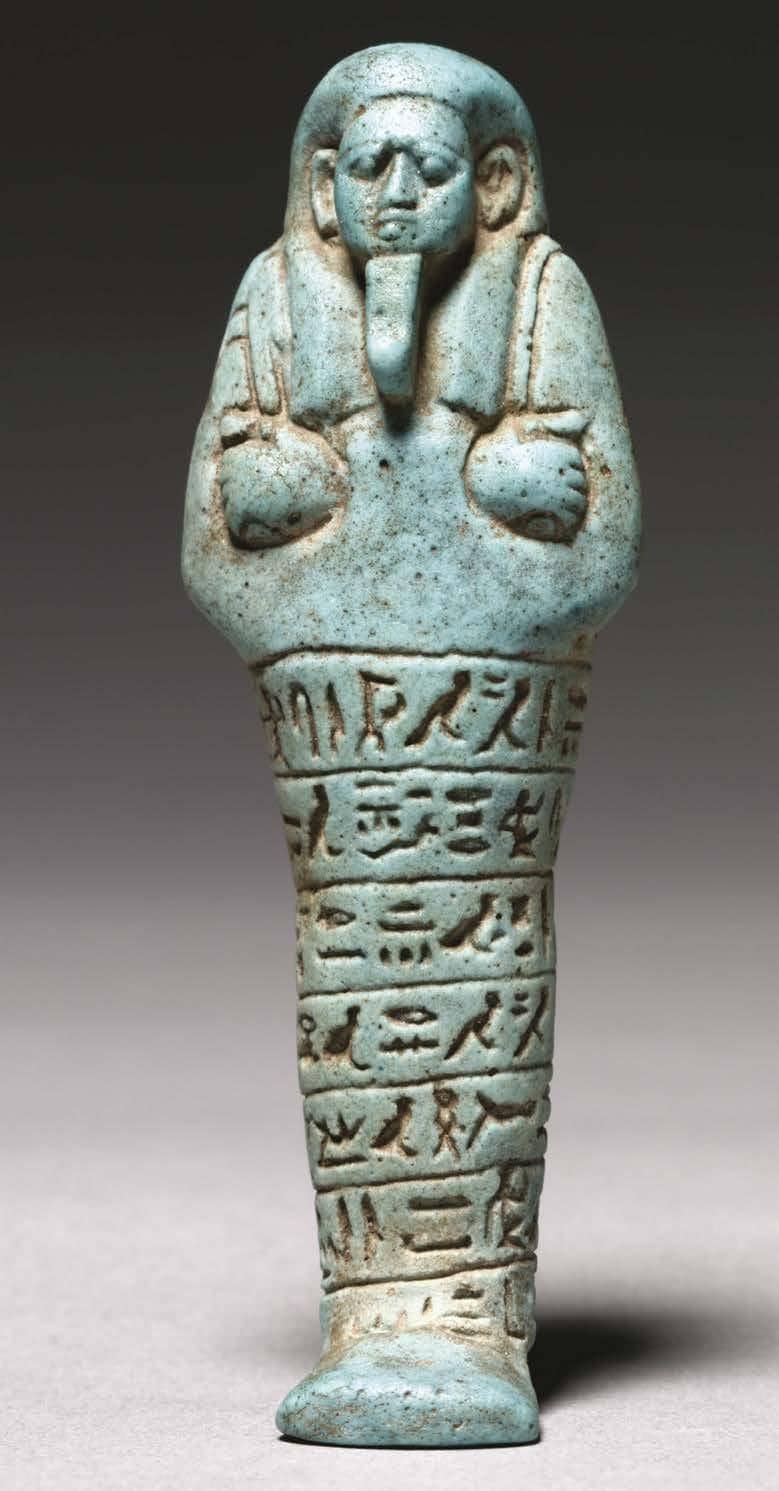 Answering the Question of Provenance

One of the gifts that ruler Moctezuma II lavished upon Spanish conquistador Hernán Cortés when he arrived in the Aztec Empire in 1519 was a chest ornament depicting a double-headed serpent. Displayed today in the British Museum in London, this 20-inchlong, 8-inch-high ornament, inlaid with white shell, red coral, and thousands of blue turquoise pieces is among the most extraordinary pre-Columbian artifacts to survive the Spanish conquest of what is now Mexico.

Turquoise held a special place in the Aztec value system. Its rarity alone made it precious; even more importantly, its blue-green color signified the land’s fertility, one of the Aztec culture’s major precepts. Also symbolizing water, new growth, and the revered quetzal bird’s feathers, turquoise was sacred to the Aztecs and the contemporary Mixtec culture and the Mayans who preceded them.

The colorful mineral is prominent among the artifact materials of the Aztec, Mixtec, Zapotec, Tarascan, and Mayan pre-Columbian cultures of Mesoamerica (a region stretching from southern Mexico to Honduras), and archaeologists have long debated its source. However, most have agreed that Mesoamerican turquoise was actually mined 1,200 miles to the north in what is now the American Southwest, then brought to Mesoamerica via an extensive trade system that operated for centuries.

The evidence supporting this theory, while circumstantial, is nevertheless convincing. First, Mesoamerica has no documented turquoise deposits, while the Southwest has many. Second, the peak Mesoamerican use of turquoise coincides closely with the height of pre-Columbian turquoise mining in the Southwest. And finally, the recovery of copper bells, cacao, scarlet macaw feathers, and other Mesoamerican trading commodities from southwestern cultural sites indicates the existence of some level of commerce between Mesoamerica and the Southwest.

Nevertheless, without scientific proof, the existence of this turquoise-trading system was just a theory that could be proved—or disproved—only when chemical testing positively linked turquoise specimens to their deposits of origin. Initially, establishing the provenance of turquoise or, as geochemists now say, “fingerprinting,” turquoise, seemed a simple matter of basic chemistry that called for identifying a chemical characteristic of turquoise unique to each mine source. But as it turned out, fingerprinting turquoise would be a complex process developed only after a century of trial-and-error experimentation.

But the early effort has now paid off. By measuring the isotopic ratios of trace elements in turquoise specimens and comparing them with the proportions in databases representing the host rock of turquoise deposits, researchers are now beginning to trace turquoise specimens to their source reliably.

Although this subscience is still in its developmental stages, initial results have already raised eyebrows among archaeologists and anthropologists by refuting two long-prevailing theories: First, that Mesoamerican turquoise came from the American Southwest and, second, that New Mexico’s Chaco Canyon culture, the greatest of all pre-Columbian turquoise-working societies, obtained all its turquoise from the nearby Cerrillos mines. As a result, scholars are now rethinking the entire picture of the pre-Columbian turquoise trade.

Turquoise is a basic copper aluminum phosphate with the chemical formula CuA l6 (PO4) 4 (OH) 8·4 H2O. Ideally, its weight consists of 7.81 percent copper, 19.90 percent aluminum, 15.23 percent phosphorus, 55.08 percent oxygen, and 1.98 percent hydrogen. Turquoise is one of the 300-plus members of the phosphates, arsenates, and vanadates class of minerals. 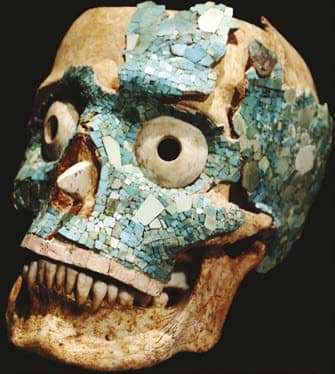 Crystallization occurs in the triclinic system, which has three axes of different lengths, none perpendicular to the others. Because this low-symmetry arrangement inhibits crystal development, turquoise macro crystals are rare, small, and poorly formed. Most turquoise consists of tightly bonded microcrystals in massive or compact forms. The close atomic packing creates strong atomic bonding and a substantial hardness of Mohs 5.0-6.0.

As a secondary mineral, turquoise occurs in shallow oxidation zones of copper-rich deposits. The copper in turquoise is derived from the alteration of copper-sulfide minerals, aluminum from the alteration of feldspar and clay minerals, and phosphate radicals from groundwater-dissolved fluorapatite [calcium fluorophosphate, Ca 5 (PO4 ) 3 F]. Turquoise forms in low temperatures and pressures, as well mainly in warm, arid climates. Hydrothermal deposition typically creates thin veins, fracture coatings, and nodules. 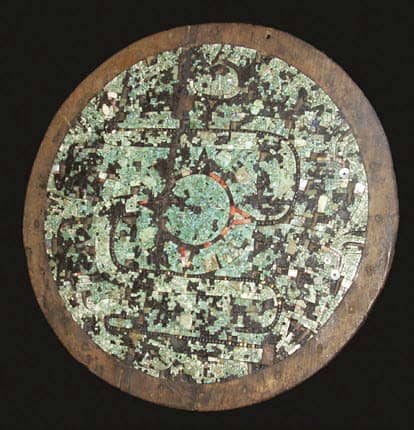