An Exercise in CAD, or How to Draw (Internal) Gears. 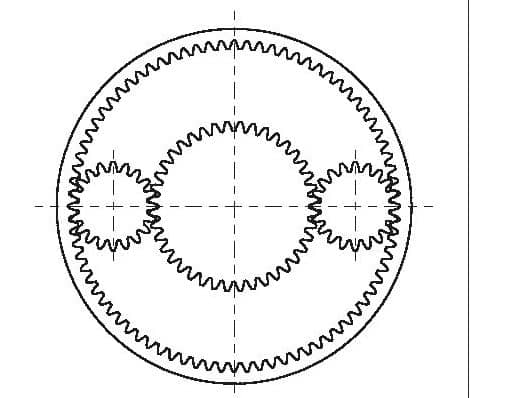 Some years ago, I was having trouble visualizing how epicyclic gearing would work and came to the conclusion that perhaps if I drew it out using CAD, including all the teeth, I could gain a better understanding. This I managed to do, and I produced some figures which appeared to show how it worked.

Unfortunately for me, I eventually discovered that the figure for the internal gear was wrong, even though it appeared to work on paper. I therefore resolved to attempt to improve matters. This article is the result of those improvements, and fig. 1 shows an epicyclic gear system consisting of a 40T Sun wheel, two 20T Planet wheels and an 80T annulus or internal gear wheel, all drawn using the methods outlined below.

When I first looked into this subject, the only information I could readily find was that published by Ivan Law in his book Gears and Gearcutting (Workshop Practice Series (WPS) 17), together with a series of articles by Dave Lammas in Model Engineer (ME) starting 21 January 1990. Law does not cover internal gears, whilst Lammas devotes only a few paragraphs to this sub-division, and even then, it is based on how to cut the gears rather than the theory behind them. I did find a very complex set of articles by Len Snell in ME starting 26 September 1997.

By the time of my second attempt, Harold Hall had produced his Metalworkers Data Book (WPS 42) which gave formulae in both DP format and MOD format, the latter being for metric use, but still only for external, i.e. spur gears. I also found various articles on the internet about internal gearing, but again, they were rather complex.

As I looked more and more into this subject, I began to realise that there was a lot of compromising going on. For instance, a complete set of commercial cutters for one pressure angle consists of eight cutters, each cutter covering a range of teeth. From which it follows that any one cutter can only be correct for one particular tooth value and that for all the others within that range, there must be an error, an acceptable error it is true, but still an error. Hence any commercial gear cutter is a compromise.

I also came to realise that internal gears to the involute profile were also a compromise as the teeth are “adjusted” to eliminate the probability of interference between a spur and internal gear pair. Which is what Lammas’ method of creating an internal gear effectively does.

Furthermore, Law says that the use of an arc in place of the involute curve not only simplifies matters for the amateur but introduces less error than that caused by the use of one cutter for a range of teeth. Yet another compromise.

A further problem is that for some combinations of number of teeth and pressure angle, the base circle from which the involute curve starts lies between the Pitch Circle and the Working Depth Circle. This means that the involute curve has to be extended backwards, something I found impossible to do. Using an arc to replace the involute curve overcomes the problem.

All in all, then, there is a strong case for creating a compromise figure using Law’s arc replacement method for spur/external gears and something similar to Lammas’s method of making internal gears.

The CAD program that I use is DesignCAD 3D Max version 17.2 (DC17) dating from 2007 and is thus obsolete. Also, I use Linux rather than Windows and hence have to use an intermediary program called Wine in order to run DC17. There are a few problems with this arrangement, but nothing that cannot be worked around, the result being that I find this arrangement satisfactory and have no intention of either upgrading DC17 or replacing it.

This does mean that there is a problem in that the commands I use in DC17 in all probability will not be exactly transferable to other CAD programs. Where I feel necessary, I have therefore tried to describe what the various commands do in addition to using the actual commands: it will be up to you to translate those descriptions into commands suitable for your CAD program.

It is worth pointing out that the procedures to be described involve the figure of temporary construction lines which will be deleted once the need for them is done. It will also be necessary to show and hide various lines as the figure proceeds. It is therefore suggested that use be made of the layer facility if provided as this will enable various lines to be hidden or shown at will. Furthermore, the use of different colours for the layers will aid identification. For what it’s worth, I use the layers thus:

The use of colour for the individual layers and functions in a figure may be controversial, especially as we are used to a single colour, usually black, however D.A.G. Brown in his book “CAD for Model Engineers” (WPS No.29) discusses this very point and gives a clue to his colour scheme. Needless to say it is different to mine, but he does say (in respect of colour): “Sort out in your own mind a plan of campaign and stick to it.” For myself, I find it very helpful to be able to use colour to identify the different layers and to be able to easily hide one or more layers on demand. 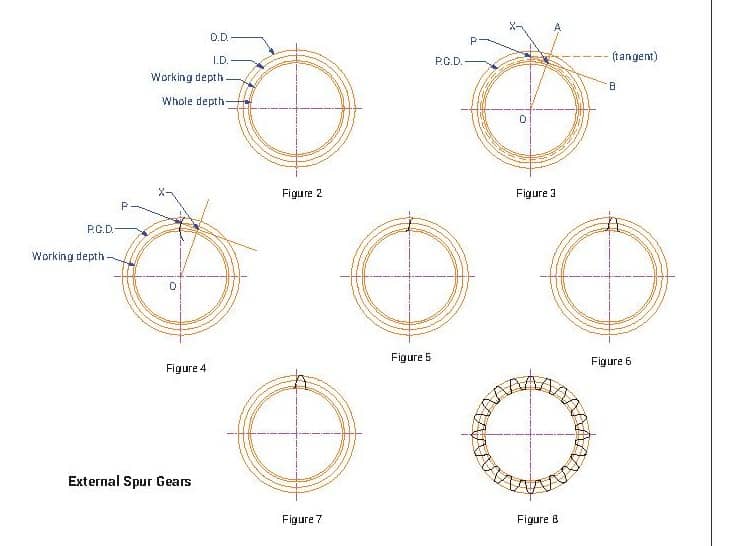 There is no escaping from the fact that some relatively simple mathematics is required, however this is nothing more than the ability to use the standard four functions as long as you use purely graphical construction methods. There are instances where you could use pi, sines, cosines or tangents to calculate various parameters, but why do that if it can be avoided? It may be thought that using graphical methods may not be sufficiently precise, but it is probable that your CAD program will have an internal precision far exceeding what is required and therefore graphical methods will be just as precise. For what it’s worth, DC17 is able to use and display up to 15 decimal digits, but since my equipment cannot measure more precisely than 0.01mm, I usually set DC17 to display two, or occasionally three, decimal digits whilst remaining secure in the knowledge that the internal precision is far greater.

I should mention that I only use metric units, hence the comment above re 0.01mm. This also means that instead of using diametral pitch (DP), I use module (MOD), a metric term defined as the Pitch Circle Diameter in millimetres divided by the number of teeth.

How to draw External or Spur Gears using the Simplified scheme