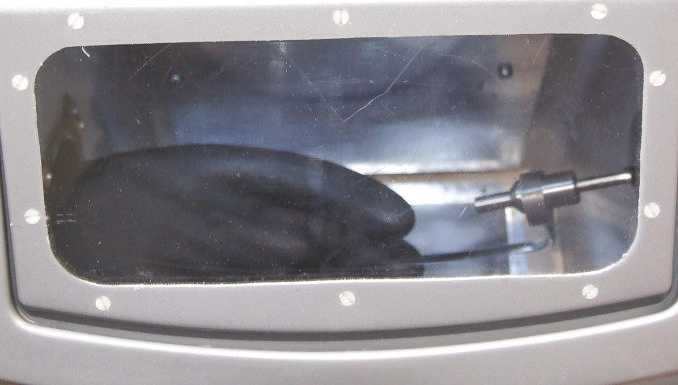 Graham Meek makes a versatile cabinet with a modest footprint and a ball joint for the gun which maximises the internal space available.

I would be the first to admit there are quite a number of Sand Blasting cabinets available commercially, so why write an article on making one? Well for one thing most of these manufactured cabinets have a high airflow requirement. The smallest cabinet I came across had an airflow requirement that was double the capacity of my current shop compressor. Having to purchase a new compressor and the sand blasting cabinet puts a big dent in the shop budget. There is also the fact that in most shops this cabinet will get only occasional usage and it can take up an appreciable amount of space on a bench or if it is free-standing. The desire to sand or more correctly shot blast small brass fabrications to make them represent castings became more urgent when I started making a Fiat 702 Tractor and a Clayton Steam Tractor. I first experimented with the shot pick-up attachment for my airline and the first cabinet was an old plywood sided box. A piece of Acrylic sheet across the top and a hole in each side to put my hands through gave the rudimentary, if not very elegant cabinet. The shop vacuum was also attached in an attempt to evacuate the dust caused during the process. I also took the precaution of wearing a proper face mask especially for fine dust, one can never be too careful. Also the first trials were conducted outdoors as an added safety measure.

The first results from my Heath Robinson approach were very good. If I am honest, they were better than I had expected. The rudimentary pick-up worked better than I had hoped. However, the medium impinging on my thinly gloved hand plus the dust/medium trying to get up my sleeves despite having elasticated cuffs, left a lot to be desired. The time was ripe for a more reasoned approach to the cabinet, but what to use. Out shopping with my wife one afternoon we passed by a discount shop selling all sorts of plastic household wares. One thing caught my eye and that was a “Flip top Kitchen Waste bin”, but at the time I did not purchase one. Back home some days later I was still mulling over the sand blasting cabinet problem when my mind went back to the waste bin. I started to visualise the flip top lid with an Acrylic window in the sloping face. The angle of this face I thought would make a good viewing aperture, especially with the bin stood on my Black & Decker “Workmate”, photo 1. The flip top lid also gave a means of getting the items in and out of the cabinet. A few days later the flip top bin, photo 2, was purchased and whilst in the shop I noticed some battery powered LED strip lights that can be fixed to a flat surface via some sticky pads. A pack of two were also purchased. One of these lights I thought would provide illumination in the cabinet, rather than having to hook up a light to the mains or provide a low voltage version. Evacuated glass lamps, or bulbs, are not the best of things to have in the vicinity of flying debris, they have a nasty habit of going pop at the wrong moment. Unless these glass objects are suitably protected, that then leads on to another item to made, so the LED lights were an added bonus.

A start was made on fitting the viewing aperture and after popping out the lid this was marked out. Marking directly onto the plastic can be a problem both with a pencil or felt tip marker pen. Masking tape was laid approximately where the lines were to go and the marking out was done on this. It also saves a clean up operation, should a marker pen be found that will adhere to the waste bin surface. A hole saw was used for the corner radii and the remainder removed using a Jig, or reciprocating saw. The hole saw used was about 32 mm (1¼”) diameter but a larger hole saw would not be amiss. A piece of Acrylic was cut to give a generous overlap all round the aperture. A cardboard template was used to establish the best size. The window was then clamped to the inside of the and the holes drilled through for the fixing screws. The holes were then countersunk to take some Nylon M3 countersunk screws, photo 3. The screws do not have to be Nylon, these were used as I had a plentiful supply of this size along with some moulded Nylon acorn nuts. This type of nut will help keep debris out of the threads should a replacement window be required at a later date. Fitting the window to the flip top lid then presented a problem when the lid assembly was re-inserted in the top. The lid stayed open, remember it is designed to open inwards, this is due to the imbalance of the heavy window. With a trial placing of the LED light on the outside of the lid I found this counterbalanced the lid, so problem solved. The light was duly adhered to the inside of the lid towards the rear, photo 4. For added security I used two Nylon M3 screws to retain the light. A small portion of moulding in the housing that forms the Bin top is horizontal and is just below where the light was sighted. This provided an anchorage for a horizontal flat Acrylic screen. This screen will stop any debris or medium impacting on the lens of the light and spoiling the light output. The screen being sacrificial and made from some material that was once a clear box top for Christmas cards or similar. 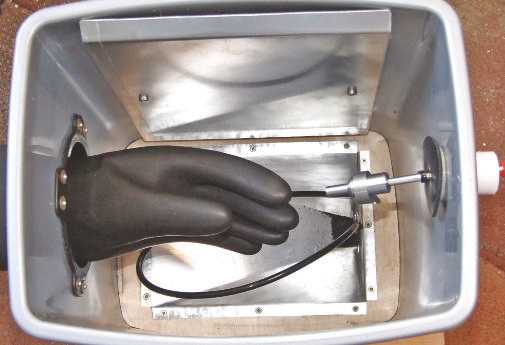