The Qi of Food 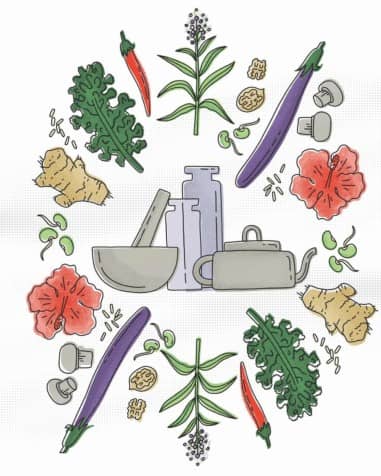 It wasn’t until I stood looking at my reflection in the bathroom mirror, angling my phone out in front of me, that I realized I was crossing a threshold: Of all the post-workout poses and pre-date outfit options sent to friends, the cutesy hellos and— ahem—unmentionables texted to love interests, this would be my most vulnerable selfie since smartphones rendered them commonplace.

But, I reminded myself, this was my idea. And so, after taking a deep breath and finding the best light, I stuck out my tongue, snapped a close-up of it, and hit send.

The day before, Nathalie Basile— the classical Chinese medicine practitioner on the receiving end of my awkward tongue selfie—told me that this particular body part is more revealing than people might realize. It acts as the body’s table of contents, outlining potential health issues to trained eyes like Basile’s. Surveying its color and topography is part of the traditional intake, or initial assessment, that patients undergo in order to have concerns identified and addressed by Basile. Our plans to meet in person for such an intake—which also typically includes measuring the pulse in three places and discussing past and present life circumstances—were interrupted by the rapid spread of COVID-19, and so Basile and I connected remotely. But the selfie, and the unexpected vulnerability hangover it caused, was all for naught: Without the other pieces that Basile uses to put together a puzzle that illustrates a person’s overall health, my tongue photo is as useless as a blender without blades.

AS A WHOLE, the American palate has gone awry. The influx of self-described foodies, reality cooking shows, and vacations designed around eating in far-flung destinations is misleading: As a culture, we’re not obsessed with food—we’re obsessed with its composition. It’s a phenomenon that author Michael Pollan warned about in his book In Defense of Food more than a decade ago: Food is out; nutrients—like saturated fat, cholesterol, and carbs—are in. What started as a marketing takeover of supermarket packaging in the 1980s has morphed into a fi xation on minerals and chemical compounds, numbers and science, elements of food rather than the food itself. That in turn has bred a slew of cure-alls in the form of restrictive diets meant to optimize our output by limiting our input to anything but carbs or only plants or whatever walked the earth thousands of years ago.

And yet, we aren’t any healthier for it—if anything, we’re less so. Chronic diseases are the leading causes of death in America and the Centers for Disease Control and Prevention identifies poor nutrition as a key lifestyle risk.

Long before we entered this frenzied era of hyper-controlled diets, classical Chinese medicine used food to nourish, treat, and heal the body. At the root of these practices: Qi. That’s where Basile—an acupuncturist and holistic health counselor at Alchemy in Asheville, North Carolina, a tearoom and apothecary offering alternative health care—comes in. The 34-year-old is also a personal chef, cooking for clients based on the underlying energetics of Chinese dietary therapy and prescribing food as medicine.

Basile is quick to point out that the classical paradigm differs from its better-known counterpart, traditional Chinese medicine (TCM), which is the result of a midcentury effort by the Chinese government to systematize the ancient medical practices that are now called classical Chinese medicine. The latter was discovered—in the same sense that the principles of math and astronomy were discovered—more than two millennia ago, while TCM is a modern offshoot. Both the traditional and classical models defer to a single element that’s central to a person’s well-being and also comprises, guides, and shapes all existence as we know it. While this omnipresent force is known as Qi (or ch’i, as it’s often written in the West, both pronounced “chee”) has no direct English translation, it’s widely accepted to refer to energy, and it’s in everything we are, everything we know, and everything we eat.

Neither strictly life force nor wholly matter the makeup of Qi is so complex and nuanced that medical researcher Ted J. Kaptchuk dedicates an entire chapter to defining it in The Web Has No Weaver: Understanding Chinese Medicine, his reference book that is often used by acupuncture schools to introduce the practice to students. “Qi does not ‘cause’ change,” he writes. “Qi is present before, during, and after any metamorphosis. The change has to do with the manifestation of what is already inherent in the earlier state … One Qi elicits the propensity of another Qi that shares a similar kind of ‘frequency.’ Things ‘energize’ each other. Through resonance, one Qi evokes another.”

Thus, the web begins to spin, the threads of Qi connecting the cosmos to everyone and spinning inside each person a cosmos of their own. Kaptchuk explains that this is why we’re affected by the “universe”: Basically, we’re all made of the same stuff that it is—and that stuff is Qi.