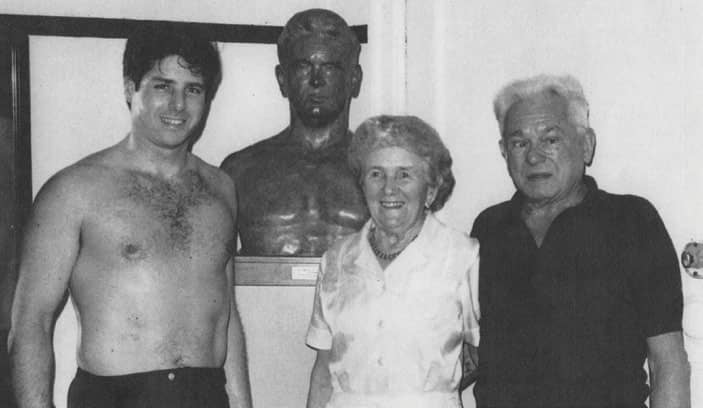 In an excerpt from his new memoir, Caged Lion, attorney John Steel recalls his relationship with Joseph and Clara Pilates, and his role in saving the method from fading into history.

EARLY ONE BRISK FALL MORNING IN 1963, I LEFT MY APARTMENT ON UPPER FIFTH AVENUE IN NEW YORK CITY, TO OK THE BUS DOWNTOWN TO 57TH STREET AND WALKED WEST ACROSS TOWN UNTIL I REACHED A SHABBY, OLD STYLE NEW YORK TENEMENT, FRONTING ON AN ENTIRE BLOCK. I was on my way to a physical therapist highly recommended by my mother. Mom had been hounding me for at least six months to see him. She thought this man was a wizard with the human body and was certain that he could fix my chronic stiff neck. I was skeptical—just another of my mother’s many enthusiasms. My resistance finally cracked not so much to relieve the pressure on my neck as to end the pressure from my mother.

I entered the unlocked outer door of 939 Eighth Avenue and stepped into a cramped, smelly space serving as the lobby, mail room, laundry drop-off, umbrella shake-out room and entry hall for the occupants of the many small apartments. The inner-door latch was broken and provided as much security as a sign saying: “Thieves Not Admitted.”

Even though unnecessary, I hit the buzz-me-in button next to a faded “Pilates” label. Might as well let this Mr. Pilates know I was on time. Then I walked up the main stair to the second floor and through the heavy fire door into a dim hall where, to my surprise, a barely clothed old man stood like a statue. He had to be Joseph Pilates, the miracleworking physical therapist. He was deeply tanned and had an impressive head of unkempt white hair. To the extent he had on clothes, they were his work outfit: tight black shorts and canvas slippers. He was topless despite—or in defiance of—the chilly November cold in the hall. Long, loosely hanging but very muscled arms showed veins popping out everywhere. He wore thick glasses in nondescript plastic frames with tape on one temple. Behind the lenses, his left eye was fixed on me while his right eye was immobile. It was glass. He was several inches shorter than me and very compact. His stance—balanced, upper body forward, arms up— was that of a boxer ready for a fight. The picture that popped into my mind was of a lion with a great mane, on its hind legs, paws up. Vigor and energy poured out of him. The man I was facing radiated the authority of a Marine drill sergeant, and some of the meanness too.

I took his extended hand, which he stuck out into the considerable space between us without so much as a smile. The handshake was weird. He seemed to be checking my pulse. He not only had a finger on my inner wrist, his left eye scanned me up, down and sideways as if I were an applicant for a job where appearance and personal hygiene were important. He held the handshake an uncomfortably long time.

I was a product and member in good standing of the very comfortable American middle class. Yet here I stood in a seedy hallway, face-to-face with a mostly naked man who was 52 years my senior and from another world, and I, the highly educated and socially adept New York lawyer, was off balance—not a good thing when facing someone with the stance and demeanor of a boxer. I tried to break through the icy welcome of Mr. Pilates by explaining why I was there. He grunted an unmistakable signal that warned me: Mr. Pilates was not interested in talk of any kind.

I followed him through an old-fashioned door with a large opaque glass panel on which was painted in beautiful script “Joseph H. Pilates.” This was the gym. It was approximately 15 feet wide and 20 long—the size of an old New York apartment living room, which it had been at one time—with a high ceiling and three tall windows facing east on Eighth Avenue. Even with all the morning light streaming in, the room had a dark, heavy, Teutonic look. Worn Oriental rugs covered most of the floor. The walls, café au lait colored from paint or age, were covered from floor to ceiling with pictures of Joe doing the exercises. All the photographs had an antique appearance in dark frames hung precisely edge to edge.

The atmosphere of the gym was comforting. There was something warm and welcoming about the space: the openness and the décor. What caught my eye was what I guessed to be the exercise equipment: Apparatus unlike anything I had ever seen before was lined up with military precision like jeeps in an army motor pool, taking up most of the huge floor. Four central pieces resembled single beds, with sturdy frames of nicely burnished wood and carved claws where the legs met the floor. These well-made and polished pieces almost looked comfortable until I examined them closely. Each frame supported a platform—like a bed frame supporting a mattress—that was upholstered in black leather. The platform was about four feet long and went back and forth inside the frame on wheels at each corner. Four long springs connected the platform to one short side of the frame. Belting-leather straps, looped through pulleys, were attached to the platform in opposition at the other end. The leather straps and other pieces of industrial-strength hardware looked like restraints or torture devices.

As I soon learned, these contraptions, the centerpiece array in the gym, were called “Universal Reformers,” the Pilates signature machine known the world over now as “the Reformer.” Another contraption in the shape of a wooden chair sat in the corner. It was unremarkably named “the Chair,” and it had a discomfiting resemblance to an electric chair. Yet another piece, called a “Ladder Barrel,” left nothing to conjecture: Its design almost spoke to you—your body would be draped over it. I could hear my spine snapping. One device named “the Spine Corrector” took up little space. I suspected it was there to put your back together after the Ladder Barrel. Another bit of gear had the oh-so-friendly moniker “the Guillotine.” Nowhere in this array could I see any of the equipment you might expect in a gym in 1963—no weights, barbells, medicine balls or chin-up bars. Joe sensed my bewilderment and said: “I invented all this equipment to teach Contrology. That is all we do here. That is all you need for your life. You will see.”