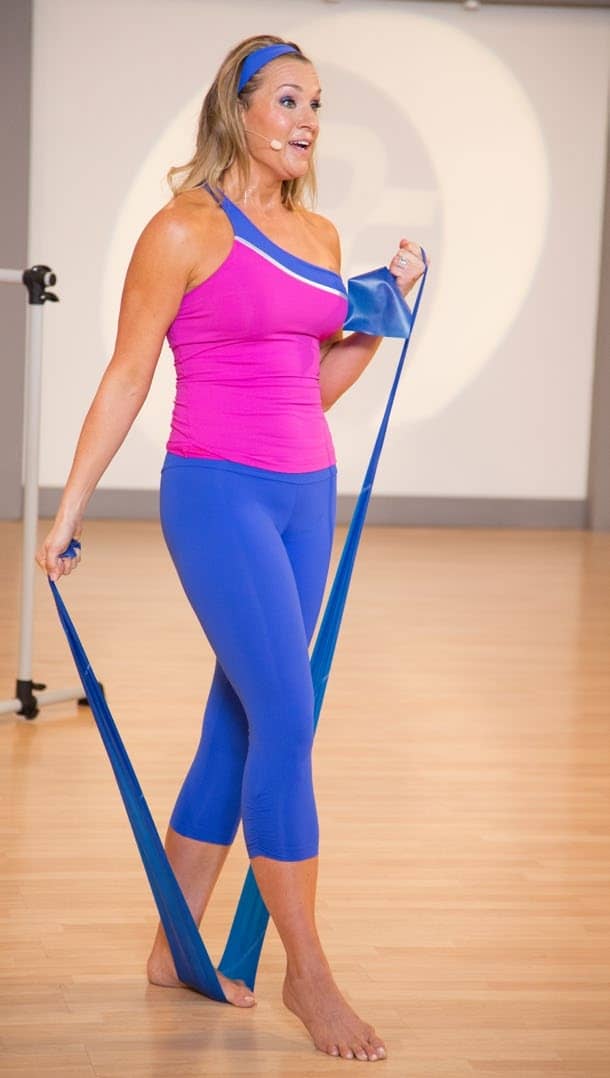 Studios may be shuttered, but bands can give you the benefits of machines at home—for less than $10.

THREE YEARS AGO, THE L AKE AUS TIN SPA RESORT IN AUSTIN, TEXAS, UNVEILED A NEW GROUP-FITNESS CLASS TAUGHT ENTIRELY ON THE DA VINCI BODYBOARD, A WOODEN BOARD THE SIZE OF A YOGA MAT. During the 30-minute sessions, participants performed a mix of strength exercises, quickly flowing from one move to the next to keep their heart rates high. “It’s by far one of our most popular classes,” says Cindy Present, the resort’s longtime fitness director. “It’s a full-body session that recruits all muscle groups, big and small, and can be done with low to no impact.” So what makes the BodyBoard so effective? Resistance bands. The simple tools attach to the board, allowing participants to train together at their own level.

Long a mainstay of physical therapy, resistance bands have become a group fitness fixture in the past decade. Soon stand-alone studios like the Board30 franchises popped up, specializing in classes like those taught on the BodyBoard. Yet despite the omnipresence of resistance bands, no one could have predicted the peak their popularity would reach this spring, when home workouts became the only workouts. Suddenly bands became harder to get than a bottle of hand sanitizer. And for good reason: When it comes to building strength anywhere (and on a budget) there’s no equal to this humble rubber tool.

Studies prove that strength training has numerous benefits, including decreasing risk of osteoporosis and increasing lean muscle mass (which can also help offset declines in metabolism.) “Strength training also enhances your ability to perform everyday activities,” says Patricia Friberg, a STOTT PILATES®–certified instructor and creator of The Bottom Line & A Core Defined. To build strength, muscles need to work against resistance—and that’s where tools come in. While most people think of free weights like dumbbells or Pilates apparatus like a Reformer as the best strengthening options, metal and machines aren’t necessities. A review of research found that rubber resistance like a TheraBand increases strength as well as free weights (such as machines and dumbbells) do. What’s more, bands may have a few advantages when it comes to training.

When you lift a weight like a barbell, gravity helps return it to its starting position; during a rep with a band, there’s still resistance during the lowering (or concentric) phase of an exercise. “Time under tension is fundamental in muscle gain, and by utilizing a resistance band you keep constant load on the muscle group, especially at the apex of a lift—the peak point where your muscles would be under the least amount of stress with traditional weights,” says Present. “With resistance bands, your muscles never get rest.”

Bands also boost the wobbly factor of an exercise, since the more you stretch them the less stable they are, and that fires up more muscles. “Bands recruit stabilizing muscle groups and core muscles,” says Friberg. “Plus, they allow you to utilize resistance through the horizontal plane of motion.” Rubber tools are also inexpensive and easy to store (toss them in a duffle, and you’ve essentially got a grab-and-go gym!)