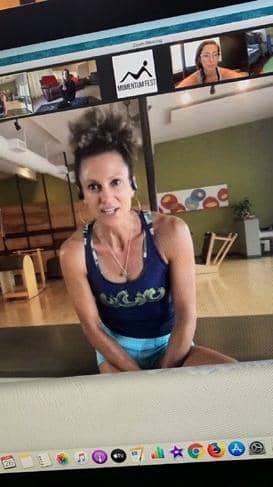 Overcoming obstacles caused by the pandemic, the virtual version of this popular festival still achieved its goals.

OF THE MANY EVENTS THAT WERE CANCELED DUE TO THE CORONAVIRUS PANDEMIC, THE MOMENTUM FE S T, WHICH WAS ORIGINALLY SCHEDULED FOR JUNE 26-28 IN WESTMINSTER, CO, WAS ONE THAT WAS ESPECIALLY DE VA STATING TO PILATES FANS. As the impact of the virus began escalating in March, “it became clear that things were possibly moving [toward cancellation],” relates Jessica Valant, a Pilates teacher and physical therapist who founded the festival three years ago with her husband, Brian Valant. “We officially made the announcement to cancel our in-person event at the end of April.”

But like people around the world, Valant quickly pivoted to reconceptualizing Momentum Fest as an online-only event that was dubbed the “Momentum Fest Virtual Experience.” The live classes, workshops, sessions, roundtables and talks were all done on Zoom.

Valant says that having to pivot to a virtual event “taught me that we are all looking for something positive, hopeful and inspiring right now, that community can be found through a computer screen and that we are so grateful to be a part of this industry.”