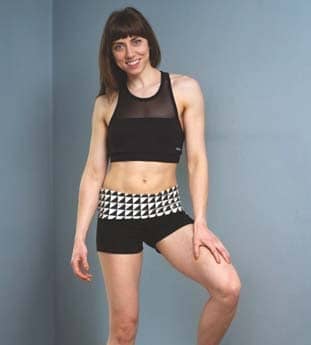 CALLING ALL FIT WOMEN Think you have what it takes? Send your story to future of fitness @oxygenmag.com.

Natural Ninja. For Cara Poalillo, sports have always been a constant. Growing up, she played soccer and volleyball and ran track and field. But never in her wildest dreams did she imagine that her natural athleticism would lead her to become a competitor on NBC’s American Ninja Warrior. Poalillo has competed on two seasons of ANW. She currently ranks among the top women in the country, and she cites Oxygen coach and ANW veteran Angela Gargano as one of her biggest inspirations. “She really goes after her goals, and that pushes me to do the same,” Poalillo says.

Home Work. Poalillo is currently training for the next season of ANW and has a killer in-home setup with cliffhangers, ropes, peg graspers and a variety of hanging holds. Outside in her yard, she has constructed a balance tank, wobble walk and several PVC tubes for agility training. She also heads to the gym twice a week to lift, and she is especially fond of pull-up work.

Inspiring Others. When not Ninja-ing, Poalillo works as an American Sign Language interpreter and shares her at-home workouts with the deaf community on her YouTube channel. She also founded Ninjababes, a community of female ninja warriors that helps women and girls build competitive athletic skills and confidence through online and in-person training. “I tell them just to hang on a little longer,” she says when asked how she motivates her clients. “You’re going to hit that buzzer and complete the course.”

Crash and Burn. In high school, Kayla DeMarco was an avid volleyball player, but a car accident left her with a severe ankle injury and chronic pain that squashed her ability and desire to be physically active. Her sedentary lifestyle coupled with poor nutrition meant inevitable weight gain, and by college graduation, DeMarco had topped out at 206 pounds. Around the same time, she was diagnosed with multiple autoimmune diseases, including Hashimoto’s, mixed connective tissue disease and Raynaud’s.